The Tokyo Foundation announced the re-launch of “Sylff Leadership Initiatives (SLI)” and “Sylff Fellows Forum for Global Dialogue” (starting in 2015). Four fellows were selected as SLI recipients, and the report of the first recipient's seminar can be read here. In addition, 22 Sylff Research Abroad awardees were named in 2013. All awardees and the reports (by fiscal year) can be read here. We look forward to receiving your applications in 2014!

The University of Athens celebrated the 20th anniversary and Jadavpur University celebrated “10 Glorious Years” of their respective Sylff programs in 2013.

Many Sylff fellows sent news of their activities: Jory Vinikour was nominated for a Grammy Award; a Sylff Chamber Music Seminar Concert was held in Vienna; Julia Zulus participated in Rainbow 21 International Suntory Hall Debut Concert in Tokyo; Jordan Matsudaira was appointed senior economist in the Council of Economic Advisers (CEA) for US President Barack Obama; Bryan Matthew Thompson delivered a presentation at the Third International Conference on Government Performance Management and Leadership at Waseda University in Tokyo; Itamar Zorman made his recital debut in Tokyo; and the Ateneo de Manila University has made a call for donations and a relief campaign is being promoted by Sherilyn Siy Tan for victims of Typhoon Haiyan. The Tokyo Foundation offers its deepest condolences to the people in the Philippines over the devastating loss of life and property from this super typhoon.

We were delighted to welcome many members of the Sylff community to our office in Tokyo this year. On July 10, the Tokyo Foundation hosted the first-ever gathering of Sylff fellows and SSC members at our office; 20 Sylff fellows and SSC members attended the gathering. Articles detailing the visits can be accessed by clicking on the names/links below. We hope to welcome many more visitors in 2014, so please be sure to contact us when you have plans to visit Tokyo!

In December 2014, the Tokyo Foundation will host the Sylff Administrators Meeting in Tokyo. Details will be announced shortly. 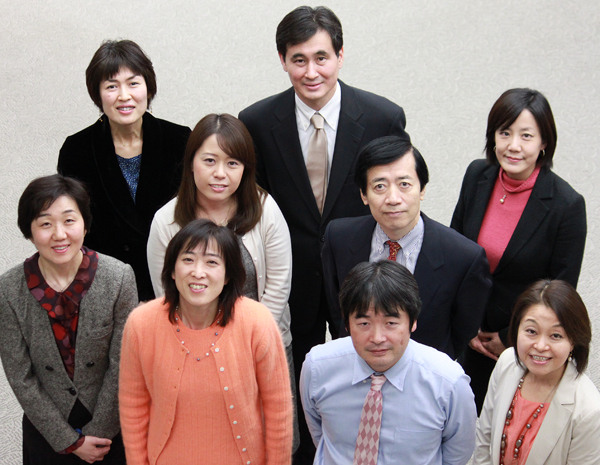 (on the back row from left to right) Tomoko, Takashi Suzuki(Director), Akiko

(on the middle row) Eriko, Tetsuya