Merewalesi “Mere” Nailatikau, who was a recipient of a Sylff fellowship for two years from February 2010 while studying toward an MA degree in development studies at the University of the South Pacific in Suva, Fiji, has been appointed UNICEF’s regional ambassador for the Pacific Island countries to help promote the organization’s activities in the region.

As UNICEF’s regional ambassador, Mere is playing an important role in promoting public awareness of the rights and issues of children, women, and young people in the Pacific Islands. Mere has spearheaded many youth-related initiatives and campaigns, including those involving climate change, child poverty, and safe motherhood practices during and after pregnancy.

In addition to her UNICEF work, she also serves as a communications officer of the Pacific Leadership Program, a regional initiative of the Australian Agency for International Development aimed at strengthening existing and emerging leaders and leadership practice in Pacific Island countries.

“My time as a recipient of the Sylff fellowship gave me much-needed space and the opportunity to expand my horizons academically,” Mere recalled. “I was able to explore in a more in-depth manner the questions I had from my experience working in civil society.”

She notes that when working in a community-based or a regional-based context, “It’s often easy to forget about the larger picture or to look at global trends and characteristics. Being a member of an international community through Sylff, I was glad to know I wasn't alone in my interests. It was good to feel part of a global development movement, with people seeking answers to questions that were similar to mine and who also had refreshingly diverse views on how to make a positive difference in their respective societies—and indeed, the world.”

The Tokyo Foundation asked Mere to describe her role as UNICEF ambassador and about her budding career:

TOKYO FOUNDATION: How long is your term as UNICEF regional ambassador?

MERE: I began my term as UNICEF ambassador in 2011 and am serving a two-year term, which will come to a close next year.

TF: Why did you decide to take on this voluntary role?

MERE: I’ve been involved in children’s rights and advocacy since I was in high school with UNICEF’s “Kids in Media” campaign. Since then, I’ve kept up to date on children’s issues and have gotten involved whenever I can. 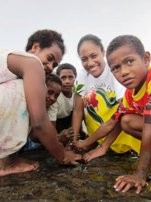 I feel passionate about making the world a better place for children; they are the most vulnerable members of society and deserve care, love, and protection so they can grow into responsible and positive adults. We all are children at some stage in our lives, and often it is in childhood that the seeds of success are planted in our hearts and minds.

TF: Has your role as UNICEF ambassador affected your research for a master's degree?

MERE: It has definitely been time-consuming, and it’s forced me to make some hard decisions about how to prioritize my time. I’ve had to travel to events like the “Be the Change” Youth Summit in New Zealand to talk about the report on the State of Pacific Youth, as well as the Pacific Islands Forum Leaders Meeting in New Zealand to advocate for youth employment.

This took time away from my studies, but I was fortunate to have a supervisor, Professor Vijay Naidu, who was supportive of the work I did while holding me accountable to my study responsibilities. This helped me to reflect on my role at UNICEF Pacific as exercising leadership through advocacy of children's rights, as well as familiarizing myself with on-the-ground development issues involving youth and young people in the Pacific region.

TF: What are your responsibilities at the Pacific Leadership Program? Are you planning to enroll in a doctoral program?

MERE: We at PLP work in four countries—Samoa, Tonga, Vanuatu, and the Cook Islands—as well as with regional organizations like the Pacific Islands Forum Secretariat and the Secretariat of the Pacific Community.

I find my work to be a great opportunity to enhance my knowledge and skills. I’ve worked in print, web, and television media since I was in high school, and this has given me a great platform to marry my media experience with my passion for development research. I would definitely like to proceed to PhD studies in three to five years.