Sylff fellow Julia Zulus of the University of Music and Performing Arts Vienna made her first visit to Japan as a participant in the June 11, 2013, Rainbow 21 International Suntory Hall Debut Concert featuring outstanding junior musicians. The Rainbow 21 series of concerts is an annual event organized by Suntory Hall for students attending Japan’s top music schools.

With a view to promoting cultural exchange, a leading overseas conservatory is also invited each year. Participating this year was the University of Music and Performing Arts Vienna—a member of the global Sylff community; Zulus, an oboist, performed Beethoven’s “Quintet in E-flat major” (arranged by Mordechai Rechtman for a wind quintet) and contemporary composer Gyorgy Ligeti’s “Six Bagatelles for Wind Quintet” with fellow students in the Webern Wind Quintet.

Leading the group of students from Vienna was Professor Johannes Meissl, a member of the university’s Sylff steering committee. He also served as a mentor for and as a violinist in the Sylff Chamber Music Seminar, sponsored by the Tokyo Foundation in Vienna in April 2013.

“The performance caliber of the students from Vienna was extremely high,” noted one of the organizers at Suntory Hall. “Some already perform with the Vienna Philharmonic and other world-leading orchestras, and I think many of their Japanese counterparts were highly impressed.” 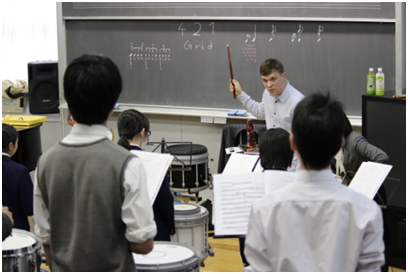 In another Vienna-related news, percussionist and assistant professor David Panzl, who performed as part of the Michinoku Wind Orchestra at Suntory Hall in August 2012, returned to Japan in March 2013 and revisited Tohoku High School to lead a workshop for student musicians. The Michinoku project was a week of workshops and concerts aimed at bringing hope and courage to areas devastated by the March 2011 earthquake and tsunami.

His offer to lead a workshop in Tohoku during a trip to Japan this year was conveyed to Noboru Endo, vice-president of the Miyagi Association of Wind Ensembles, who proposed holding a “reconstruction assistance project” under the auspices of the Miyagi Prefecture Instrument Bank. The project attracted 20 percussion students from Tohoku High School and four other nearby secondary schools. An additional 30 observers attended the workshop, including nonpercussion members of the Tohoku High School wind orchestra and officials of the high school and the wind ensemble association.

“I think it’s important to provide support to tsunami-affected areas on an ongoing basis,” Panzl said, “rather than just making a one-time donation. I may not be able to offer much, but I hope to keep doing what I can to be of assistance to the people of the area.” 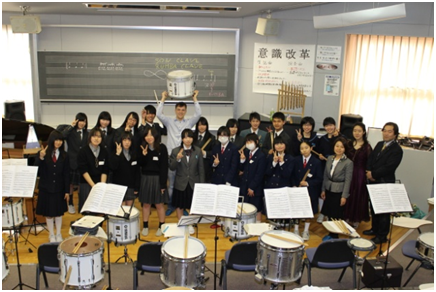 Participants of the music seminar at Tohoku High School

He also asked after Michinoku Wind Orchestra members who were unable to participate in this year’s workshop, saying “I hope to visit the area again, and I look forward to seeing how everyone’s playing has improved by then!”

Panzl was a graduate student and a part-time lecturer at the University of Music and Performing Arts Vienna during the Michinoku project, but he has since become an assistant professor in recognition of his outstanding teaching record.