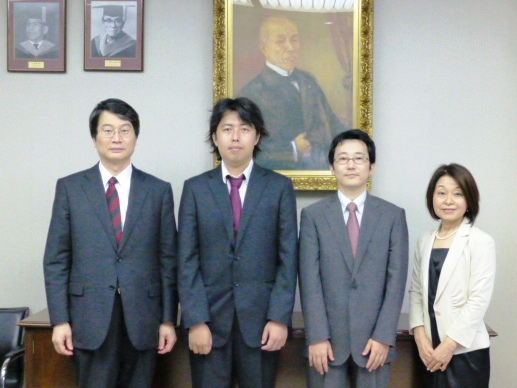 Two Waseda University graduate students were presented with Sylff fellowships during a ceremony held at a hall commemorating university founder Shigenobu Okuma on July 3, 2013. The fellowship recipients for the 2013 academic year were Ryosuke Takai, who is in the fourth year of a doctoral program at the Graduate School of Political Science, and Junji Kawashima, a third-year doctoral student at the Graduate School of Social Sciences.

“Our university, which has a history of over 130 years, seeks to further enhance its presence in the international community,” noted Naoto Onzo, the university’s executive director for research promotion and the chairman of the Sylff steering committee. “We also hope to nurture highly capable human resources demonstrating academic excellence and personal integrity who can make a positive contribution to societies around the globe. I hope that the two recipients this year will utilize their fellowships to fully advance their research and become true leaders for international society, as the name of the Young Leaders program suggests.”

Ryosuke Takai, who is undertaking a comparative analysis of the process of democratization and the spread of the rule of law in Asian and African countries, said he hoped that development models based on his research findings may contribute to the further democratization of countries in these regions.

Junji Kawashima, who is studying the institutional development and the legitimacy of change during the 1978–2012 reign of Yemeni President Ali Abdullah Saleh, commented, “I will devote my energies to research and hone my leadership skills so that those who endorsed me for the fellowship will be glad they did so.”

Attending the ceremony from the Tokyo Foundation was Director for Leadership Development Mari Suzuki, who expressed the hope that the new fellows would take advantage of Sylff’s global network to advance both their academic pursuits and personal development.