Bryan Matthew Thompson, a Sylff fellow from 2009 to 2010 at Portland State University, delivered a presentation at the 3rd International Conference on Government Performance Management and Leadership (www.icw2013.org) at Waseda University in Tokyo. 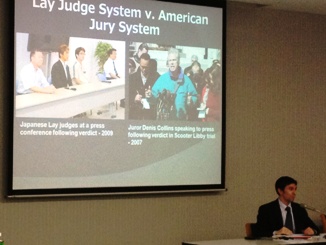 The conference was held on the theme of governance, leadership, and performance (“Accelerating Innovation in Government Performance through International Partnership”) and took place in September 2013 at the International Conference Center of Waseda University.

Bryan analyzed the controversial lay judge system in Japan that was launched in 2009, comparing it to the jury system in the United States and pointing out that the strict confidentiality restrictions in Japan may not be in tune with the democracy-enhancing aims of the system.

Bryan recently earned his juris doctor (JD) at Lewis and Clark Law School in Portland, Oregon (USA). He received a Sylff fellowship in 2009–10 and earned a master’s degree in political science from Portland State University in 2010.