The cover of Divna’s kanji textbook.

Kanji is analyzed in ways that Serbians can easily visualize.

Divna Trickovic, 2002 fellow at the University of Belgrade, has published the first textbook on kanji (Sino-Japanese characters) ever written in Serbian. She is now an assistant professor in Japanese language and literature at her alma mater.

The textbook, published in July 2013, was developed in collaboration with professor Ljiljana Markovic, Sylff Steering Committee chairperson and head of the Department of Oriental Studies at the University of Belgrade, and two of her graduate students. 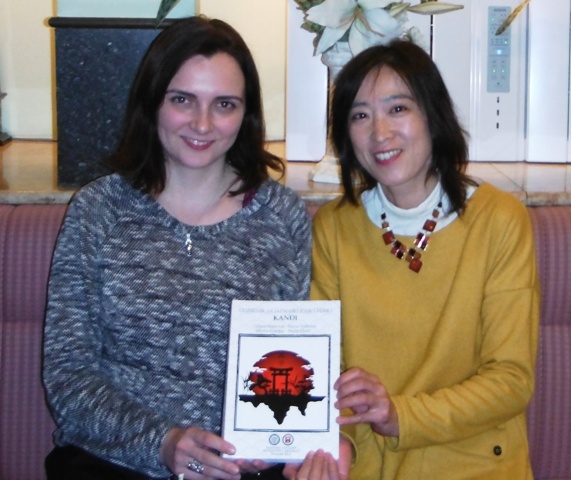 Divna was in Tokyo recently and shared news of her new textbook with Yoko Kaburagi of the Tokyo Foundation.

Kanji is analyzed in ways that Serbians can easily visualize. Leaning kanji is not easy for many Serbian students, who are not familiar with its unique features, so the textbook introduces each character in innovative ways that Serbians can easily visualize and remember. It has captured the hearts of Japanese learners in Serbia and is being adopted as an official textbook for high school students choosing to learn Japanese as an elective.

A top researcher in comparative linguistics of Serbian and Japanese, Divna was invited by the Slavic Research Center of Hokkaido University in Japan to make a presentation at a workshop on Serbian linguistics. During her visit, she also discussed the role of poetry in society in an event featuring many renowned Japanese poets, including Sadakazu Fujii.

Warm congratulations to Divna on her achievements and her pioneering efforts to bridge the cultures of Serbia and Japan.