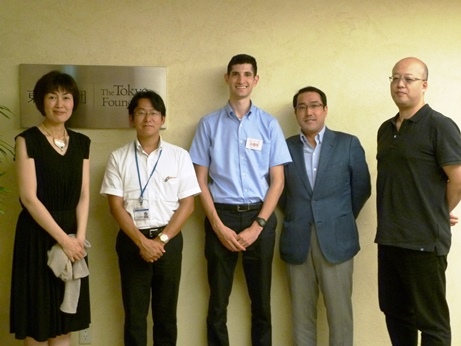 Jonathan Shalfi, who received a Sylff fellowship in 2013 and 2014 while attending the School of International Relations and Pacific Studies at the University of California, San Diego, visited the Tokyo Foundation in July 2014 to discuss Japan’s energy policy with experts at the Foundation.

He was then attending the University of Tokyo as an exchange student to study Japan’s energy security, particularly the potential steps Japan can take—such as an expanded role for the Self-Defense Forces—to ensure safe shipments of fuel from abroad.

Three Foundation experts—Zentaro Kamei, Hikaru Hiranuma, and Kenji Someno—explained the policymaking challenges facing Japan in the field of energy policy, and suggested that an attempt to link Japan’s energy security with the SDF could prove to be challenging.

The experts pointed out that in analyzing Japan’s energy policy, it would be helpful to have an understanding of the differing positions of the various stakeholders, notably such key government agencies as the Ministry of the Environment and the Ministry of Economy, Trade, and Industry. They also emphasized the importance of having a good grasp of the policymaking process and the complex political system in Japan. 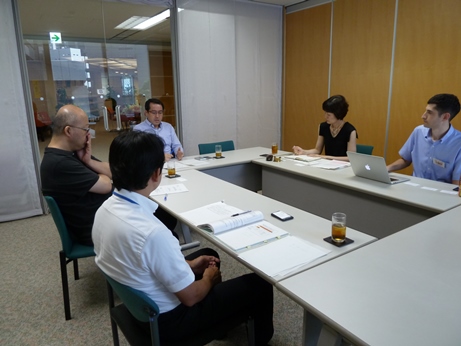 Jonathan has had an interest in Japanese culture and language since an early age. He later developed an interest in energy issues at school. These two, apparently totally unrelated fields came together following the March 2011 Tohoku earthquake and tsunami, which triggered the nuclear accident in Fukushima. He was teaching English at a high school in Hyogo, Japan, at the time. Since the “triple disaster,” he has been researching energy policy in Japan.

The Tokyo Foundation wishes him the best of luck with his research and career pursuits.