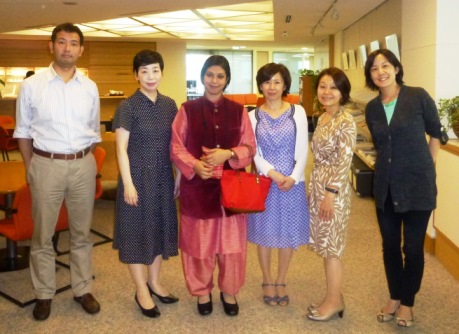 Madhuchanda Ghosh, a Sylff fellow from Jadavpur University (2004) and assistant professor in the Department of Political Science at Presidency University in Kolkata, India, visited the Tokyo Foundation on July 16 and met with members of the Foundation staff, including Executive Director Sanae Oda.

Ghosh is recognized as a preeminent scholar of Japanese studies by the Japan Foundation and was invited to conduct research as a post-doctoral fellow in Tokyo at the Graduate School of Law and Politics, Rikkyo University, for three months.

She is a specialist in Japan-India relations. At the Tokyo Foundation, she met with Research Fellow Takaaki Asano and exchanged opinions on political issues in both India and Japan, as well as on the history and current state of Japan-India relations. During her previous stay in Japan in 2011, she interviewed several Japanese lawmakers, including Shinzo Abe, the prime minister since December 2012, who was then a member of the opposition.

She wrote an article that was published in the Japan Times, a leading English paper in Japan, just before Indian Prime Minister Narendra Modi’s visit to Japan in September. Excerpts from the article, entitled “Modi’s Focus on the India-Japan Relationship,” are as follows (from the Japan Times Online):

In 2011, Abe opined that the two states would gain significantly from economic complementarities such as India’s growing market of more than 1.2 billion people and Japan’s search for new markets, Japan’s strength in hardware and India’s in software, and India’s huge infrastructural and energy needs and Japan’s technological expertise.

India can offer Japan, the world’s largest pool of skilled manpower. Abe also views that the pattern of relations among the U.S., Japan and India as of crucial importance in the context of the emerging security architecture in Asia.

Given Abe’s strong admiration for India, his friendly ties with India’s new premier and his urge to bolster the India-Japan strategic and global partnership, Modi’s forthcoming visit is likely to bring about a major transformation in India-Japan relations in the changing complex Asian geopolitical and geo-economic scenario.