Major topics discussed at this quadrennial meeting for Sylff administrators included a new financial scheme, current and future additional support programs for fellows, and emerging issues in higher education. There were also sessions devoted to dialogue on key global issues with Tokyo Foundation research fellows. Participants from over 60 member universities worldwide attended, including more than 15 Sylff fellows—some of whom have become members of their alma maters’ Sylff Steering Committees—who shared their experiences and insights. The meeting was a great opportunity to strengthen the Sylff network and explore ways to further enrich the Sylff program.

Four fellows were selected as SLI recipients in 2014, and their reports can be read here. In addition, 30 Sylff Research Abroad grants were awarded. The reports of SRA awardees on the Sylff website are classified by fiscal year. We look forward to receiving many more applications in 2015! Also in 2015, a “Sylff Fellows Forum for Global Dialogue” will be held at Jadavpur University in Kolkata, India. Please keep an eye on announcements from us for details.

We’re very happy to share news of outstanding achievements by Sylff fellows around the world.

Conductor and pianist Jimmy Chiang was appointed resident conductor of the famed Vienna Boys’ Choir. Chiang received a Sylff fellowship in 2005 while attending the University for Music and Performing Arts Vienna, where he studied orchestral conducting, chorus conducting, and piano. From late April to mid-June, he was on an extensive tour of Japan, performing at many of the most prestigious concert halls in the country, including Suntory Hall and Tokyo Opera City.

“Sustaining Life during the Early Stages of Disaster Relief with a Frugal Information System: Learning from the Great East Japan Earthquake,” co-authored by Keio University Sylff fellow Mihoko Sakurai, was published in the January 2014 edition of IEEE Communications Magazine. The paper, based on field research into the ICT systems of local governments, points to the need for municipal governments to build disaster-resilient communication systems. Power outages and the resultant loss of communication and processing capability severely constrained recovery efforts in many municipalities in the wake of March 2011 earthquake and tsunami.

Divna Trickovic, a 2002 fellow at the University of Belgrade, has published the first textbook on kanji (Sino-Japanese characters) ever written in Serbian. She is now an assistant professor in Japanese language and literature at her alma mater. The textbook, published in July 2013, introduces each character in innovative ways, analyzing kanji in ways that Serbians can easily visualize and remember. It has captured the hearts of Japanese learners in Serbia and is being adopted as an official textbook for high school students choosing to learn Japanese as an elective.

The University of Latvia organized a conference featuring nine Sylff fellows on the topic of “World in Change: From Consumption to Sustainability, from Competition to Collaboration, from Hierarchy to Networks, from Being Good to Doing Good.” The university joined the Sylff community in 2002. The opening ceremony featured remarks by Rector Marcis Auzins; Professor Ina Druviete, the former Latvian minister of education and science; Nippon Foundation Chairman Yohei Sasakawa, who described his work towards the eradication of leprosy; and Tokyo Foundation Director for Leadership Development Takashi Suzuki.

Many universities held fellowship presentation ceremonies in 2014. Members of the Tokyo Foundation attended one at Waseda University, where two graduate students were awarded Sylff fellowships during a ceremony at an administrative building named after university founder Shigenobu Okuma. The recipients for the 2014 academic year are Aya Kudo, who is in the fourth year of a doctoral program at the Graduate School of Political Science, and Nguyen Thi Phuong Thanh, a first-year doctoral student at the Graduate School of Commerce. We extend our warmest welcome to all new fellows around the world!

We welcomed many current and graduated fellows to the Tokyo Foundation in 2014.

Roger Cliff, a Sylff fellowship recipient in 1991 at the Woodrow Wilson School of Public and International Affairs of Princeton University, visited the Tokyo Foundation on April 4 to participate in a conference on East Asian security. The day-long workshop on extended deterrence in East Asia, organized by the Tokyo Foundation and the Atlantic Council, was attended by security experts from Japan, the United States, and South Korea. Cliff is a nonresident senior fellow at the Atlantic Council’s Brent Scowcroft Center on International Security, where he is engaged in the Center’s Asia Security Initiative as a specialist on East Asian security issues.

Paulo Ravecca, who received a Sylff fellowship while at York University and was awarded an SRA grant in 2011, visited the Tokyo Foundation while in Japan on an invitation from the Embassy of Ecuador. Ravecca is currently enrolled in a PhD program at York University and is writing his dissertation on the “politics of political science” in Chile and Uruguay, showing that the changes in political science in these Latin American countries are a product of power relations at different levels.

Jonathan Shalfi, who received a Sylff fellowship in 2013 and 2014 while attending the School of International Relations and Pacific Studies at the University of California, San Diego, visited the Tokyo Foundation to discuss Japan’s energy policy with Foundation policy experts. He was attending the University of Tokyo at the time as an exchange student to study Japan’s energy security, particularly the potential steps Japan can take to ensure safe fuel shipments from abroad. Three Foundation research fellows explained the policymaking challenges facing Japan in the field of energy policy and national security.

Madhuchanda Ghosh, a Sylff fellow from Jadavpur University (2004) and assistant professor in the Department of Political Science at Presidency University in Kolkata, India, visited the Tokyo Foundation and met with members of the Foundation staff, including Executive Director Sanae Oda. Ghosh is a preeminent scholar of Japanese studies and was invited by the Japan Foundation to conduct research at the Graduate School of Law and Politics of Rikkyo University in Tokyo. She wrote an article that was published in the Japan Times, a leading English paper in Japan, just before Indian Prime Minister Narendra Modi’s visit to Japan in September.

Ahmad Adriansyah, who received a Sylff fellowship from the University of Indonesia in 2002, visited the Tokyo Foundation while in Japan to attend the Ninth International Conference on Business and Management Research, hosted by the Graduate School of Management, Kyoto University, where he made a presentation on the Indonesian banking industry. This was his first visit to Japan, and he said he had a strong desire to visit the Tokyo Foundation to convey his gratitude for the Sylff program. “I wanted to say thank you,” he said, “not only because the Sylff fellowship supported my PhD study but it also opened up opportunities to receive additional awards. It also gave me the opportunity to build a global network with other fellows through my participation in the Chiang Mai Regional Forum in 2003.” 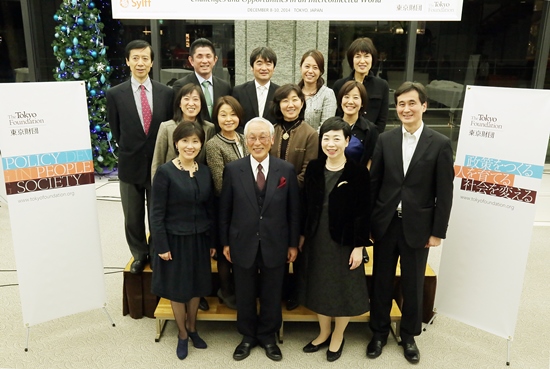