Numtip Smerchuar, a 2006 Sylff fellowship recipient at Chiang Mai University, visited the Tokyo Foundation on May 11, 2015. While working as a lecturer in the School of Political and Social Science at the University of Phayao in Thailand, she was awarded a Thai government scholarship to pursue doctoral studies. She is currently enrolled in a PhD program at the Graduate School of Asia-Pacific Studies, Waseda University, in Japan. 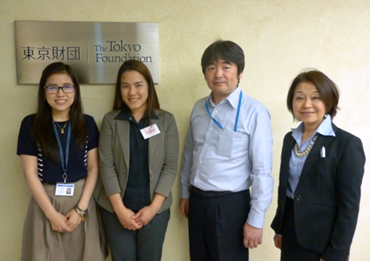 Numtip Smerchuar, second from left, during her visit to the Tokyo Foundation.

The aims of her research are to clarify the changes in the Thai government’s security policy for migrants from border States in the context of the prevailing sociopolitical environment since the end of World War II, analyze the process leading up to each policy change, and propose an appropriate immigration policymaking model for the country.

Chiang Mai, where she earned her master’s degree, is located in northern Thailand and is geographically close to southern China. The presence of many Chinese immigrants in the city, where they have settled down over the years, prompted her to study the Thai government’s immigration policy in greater detail.

Today’s migrants mainly come from other Southeast Asian countries, notably Myanmar and Cambodia. The influx of people from across the border has become a national issue, as the newcomers compete for jobs with the local population. The phenomenon also has implications for census registration, with unregistered migrants not being able to send their children to school, particularly at the tertiary level.

Numtip chose to pursue this issue in her doctoral research out of a wish to utilize the findings not only to positively affect the Thai government’s immigration policy but also to help improve the migrants’ social conditions by enhancing their employment, education, and healthcare opportunities.

The Tokyo Foundation wishes her great success in her research and career pursuits.