Now a lecturer at the university, Thu was selected as an SRA awardee in the first round of 2015. Her three-month research abroad is being conducted at the Tokyo Institute of Technology through December 2015, and she is focusing on changes in membrane surfaces that may have applications in the treatment of polluted water.

The research environment in Vietnam is still beset by inadequate supplies of equipment, Thu said. The SRA award has enabled her to access the advanced equipment at Tokyo Tech and to focus on data collection and analysis. To make the most of the opportunity, she is spending from 9 am to 11 pm at the lab on weekdays. Using the findings of her research in Japan, she will concentrate on writing her dissertation next year in Vietnam. 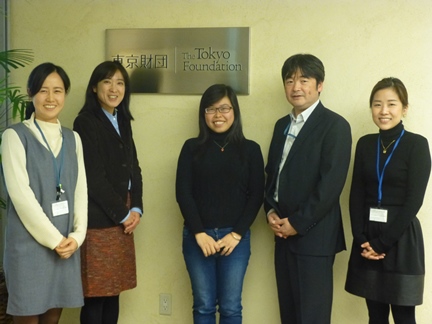 Thu said she also enjoyed interacting with Japanese and foreign researchers at Tokyo Tech, which has given her an opportunity to broaden her cultural perspective.

After earning a doctorate, she plans to pursue her research as a postdoctoral fellow in Japan. She hopes that her research will help solve water-related issues, especially in developing countries.