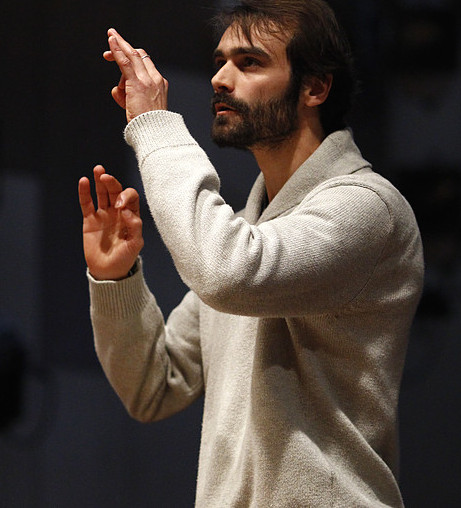 Sylff fellow Dylan Corlay, a graduate of the Conservatoire National Supérieur de Musique et de Danse de Paris and a participant in the 2012 Together in Tohoku project was named the first prize winner at the 6th Jorma Panula Conducting Competition 2015, held at the Vaasa City Hall in Finland on November 13, 2015.

The event is one of the most prestigious contests for next-generation conductors in Europe. Jorma Panula, the competition’s artistic director and chairman of the jury, is a legendary conducting teacher who is considered the “maestro of maestros.” He has been training young conductors for nearly four decades, and many of today’s most illustrious conductors have studied with him. The competition gives young European conductors an excellent opportunity to gain valuable experience, promote their own work, increase their visibility as a conductor, and open new doors.

Corlay was also selected as the favorite orchestra conductor in the competition.

He volunteered his time to participate in the Together in Tohoku project in August 2012 as a French bassoon musician, during which he also led “sound painting” workshops for middle and high school musicians in tsunami-hit areas of northern Japan.

November 13 was, coincidentally, also the day of the Paris terrorist attacks. The great news of Corlay’s achievement is a ray of light on this otherwise sad and dark day. Our warmest congratulations to Dylan!