Theories of Modernism in Cinema

Miłosz Stelmach, a 2014 Sylff fellow at Jagiellonian University in Poland, conducted research at Columbia University in New York on cinematic modernism. In this article, he provides insight into two contradictory definitions of “modernism” in cinema.

As a medium conceived at the very end of the nineteenth century, cinema is contemporary with such technological inventions as X-rays, radio, and the diesel engine, and with scientific breakthroughs like the discovery of electrons and radioactivity. It is the child of an era when modern science and modern society were being formed. Cinema is not only a modern technological invention; it is also a modern social practice. As a radically democratic medium, it served as one of the foundations of the emerging mass society and popular culture. Moviegoing was to become one of the most popular leisure activities for millions of people in the decades to come as the movie industry became one of the vital economic and social forces that shaped the modern world.

But if all that makes cinema an inherently modern phenomenon and one of the staples of modernity, what is it relation to the “art of the modern”—that is, to modernism itself? This question bothered film historians and theorists for years. The answer is necessarily related to what we understand by “modernism” in general. Only once we understand how the word is defined in terms of art history or literature can we start thinking of appropriating it to cinema. 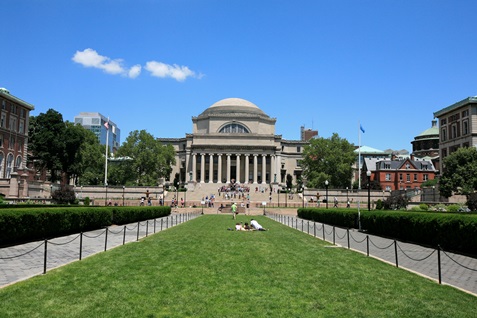 To explore this matter more thoroughly I used an SRA grant to visit Columbia University in New York. There I was able not only to access all the basic written and visual materials in the field but also to meet distinguished scholars whose academic work has investigated various problems related to modernism. My encounters with their expertise in different fields of the humanities (comparative literature, art history, culture studies, and film studies) and their various nuanced points of view enabled me to trace how our understanding of modernism has developed.

James Joyce, one of the most important figures of literary modernism.

The traditional and still dominant account of modernism, and the one with which I was primarily familiar before my visit to New York, developed in English-language scholarship in the 1950s and 1960s. It was during this period that a comprehensive theory of the subject was developed by scholars and critics like Clement Greenberg, Harold Rosenberg, and Raymond Williams, who defined modernism as an artistic movement that had developed in different fields of cultural production in the late nineteenth century and through the first half of the twentieth. Modernism marks a break with the conventions of nineteenth-century realism in favor of extensive experimentation with medium—subjectivity, fragmentation, and nonlinearity. As manifested in the surrealist paintings of Salvador Dalí, the 12-tone musical compositions of Arnold Schoenberg, and the stream-of-consciousness literature of James Joyce, modernism, as understood by Greenberg and others, employs a high level of self-consciousness and reflexivity, resulting in extensive efforts to explore the limits of a given medium and employ forms specific to it.

This definition of modernism, underlining formal innovation, self-referentiality, and medium specificity, was easily (and readily) transferred to the field of film studies. This wasn not difficult, especially given the self-evident link between developments in cinema and the other visual arts in the 1920s. Avant-garde artists like Man Ray, Marcel Duchamp, Hans Richter, and Salvador Dalí made movies themselves, and a number of cinematic movements were clearly inspired by the visual arts of the time, as reflected in names like German Expressionism and French Impressionism. Surrealism and constructivism also had a clear influence on the development of the esthetics of cinema.This understanding of modernism as a high-art tradition involving avant-garde experimentation with film language carried over to postwar international art cinema. 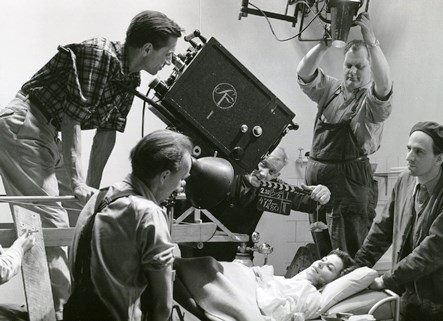 Ingmar Bergman, a chief modernist of cinema, working on the set.

Scholars like András Bálint Kovács (author of Screening Modernism: European Art Cinema 1950-1980) and John Orr (who wrote Cinema and Modernity) demonstrate how this type of cinema, best represented by the so-called New Waves and New Cinemas spreading all over the world in the 1960s and 1970s, ultimately stems from modernist traditions. We can call this definition “exclusive” because it refers to the rhetoric of innovation and auterism (as epitomized by figures like Ingmar Bergman, Michelangelo Antonioni, and Jean-Luc Godard, to name a few well-known examples) and sees these trends as marking a break with classical cinema realized in the elitist field of highly sophisticated artistry. Summarizing this point of view, Kovács identifies subjectivity, reflexivity, and abstraction as the basic characteristics of all modernist art and finds these qualities in the postwar films associated with the French New Wave, New German Cinema, and Soviet post-Thaw films, among others.

When I started my research on the concept of cinematic modernism, the standpoint described above seemed to me to be widely accepted and uncontroversial. But once I started digging deeper I realized that strong opposition to this view has emerged over the last two decades and that this understanding of the relationship between cinema and modernism has increasingly been challenged and reconfigured. From the 1990s on, many critics contradicted the traditional, Greenbergian theory of modernism as a drive toward formalist, artistic sophistication and medium specificity with their own, “inclusive” definition. These critics saw modernism simply as a cinematic reflection of modernity and its various aspects, one that did not focus on “high art” in particular but rather embraced mass culture in its entirety.

Probably the most emblematic and influential case made on behalf of this definition was an essay written by Miriam Bratu Hansen in 1999 entitled The Mass Production of the Senses: Classical Cinema as Vernacular Modernism. In the course of her argument, Hansen called classic Hollywood cinema “vernacular modernism.” In her words, “modernism encompasses a whole range of cultural and artistic practices that register, respond to, and reflect upon processes of modernization and the experience of modernity, including a paradigmatic transformation of the conditions under which art is produced, transmitted, and consumed.” In this sense, newspaper comic strips of the 1930s and Soviet socialist realism of the same period are just as modernist (if not more so) as the novels of Marcel Proust or the paintings of Jackson Pollock because they exploit the new possibilities of production, perception, and cultural engagement brought about by the modern world and transformed by the spirit of modernity. This theoretical standpoint was later dubbed the “modernity thesis.” One of its basic conceptions is that cinema as a whole is a modern art—an inherent product and consequence of modernity defined necessarily by its technological and industrial character.

After studying the most important bibliographical materials and consulting with specialists in the field of modernism studies, I am coming to believe that the two theories of the same object (cinematic modernism) I have outlined above might not in fact be as distinct (and contradictory) as they appear. In my opinion, the difference between them is not that they approach the same phenomenon with different tools and conceptions, but that they are actually examining two different fields, and merely claiming the same name for them. The gap between the “exclusive” and the “inclusive” traditions is seen not only in the choice of material their proponents wish to analyze (“high” and “popular” culture) but also, more importantly, in the way they want to approach them.

The supporters of the “modernity thesis” and the idea of vernacular modernism are interested mostly in the context (as opposed to the text itself), focusing on the social, industrial, and cultural forces shaping the work. This is why Hansen and others look closely at the specific conditions that made the cinema an important part of modernity as experienced in the early years of the twentieth century. As she declares, her aim is to identify a certain historical point of “paradigmatic transformation of the conditions under which art is produced, transmitted, and consumed.” By contrast, the idea of modernism developed by Clement Greenberg and represented in the field of film studies by András Bálint Kovács concentrates more on the relationships within cinema history itself. It emphasizes such questions as aesthetic autonomy, along with the internal evolution of specific narrative and artistic forms and their characteristics. Political, social, and cultural contexts naturally still play a vital role in these lines of investigation, but they are usually seen as possible explanations for certain formal and stylistic features and are not the main point of interest.

This is why I would like to argue that the conflict between the two theoretical orientations is in fact only illusionary. They are intertwined and in some cases complementary to each other—but most of the time they constitute different areas of film and culture studies, revealing to us different contours of what we call modernity.