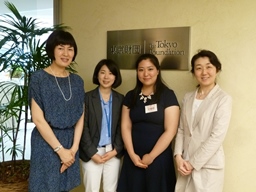 Erika Mitsui, second from right, with members of the Tokyo Foundation.

Violinist Erika Mitsui, who received a Sylff fellowship in 2015 while attending the Juilliard School, visited the Tokyo Foundation on June 6. She is not only a very talented musician but also a socially engaged future leader with an open mind and deep insights into global issues.

Mitsui, who earned a master of music in May 2016, is actively involved in organizing social activities through the medium of music. After the powerful Kumamoto earthquakes in April 2016, she took the initiative to raise funds for the restoration of disaster-struck areas. And following the Great East Japan Earthquake in March 2011, she participated in the Tsunami Violin Project to make violins from driftwood found among the tsunami debris. She played a beautiful piece with one such violin in New York in memory of the quake victims.

In the future, Mitsui hopes to organize activities to promote communication between different cultures. She became interested in the subject when she realized during a multinational workshop that music had the power to break down barriers and connect even those people with different mother tongues.

The Tokyo Foundation applauds Erika’s initiatives and achievements so far and wishes her great success in her path as a socially engaged musical artist.

Sylff fellows and steering committee members are always welcome to stop by the Foundations’ office while visiting Tokyo.