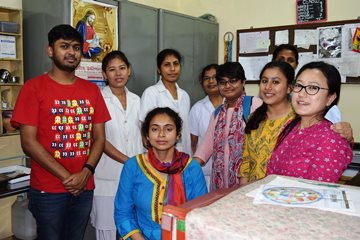 The Jadavpur University Sylff Association (JU-Sylff Association) has been actively engaged in working for the community since it was formed in 2005. On February 23, 2016, six JU Sylff fellows visited the Premananda Memorial Leprosy Hospital in Kolkata, India. The hospital is run by the Leprosy Mission, an international nongovernmental organization that works with individuals and communities affected by Hansen’s disease. The visit to the hospital is made annually by the JU-Sylff Association, inspired by the activities of Yohei Sasakawa, chairman of the Nippon Foundation. Kolkata in western India, where Jadavpur University is located, has a long history of the disease, and stigmas still remain.

The fellows visited the hospital in their local community, which now houses 20 patients, and deepened their understanding of this now curable disease. The visit began with a showing of a film titled Bajrangi Bhaijaan about a Pakistani Muslim girl who, unable to either speak or hear, becomes lost in India and meets an Indian Hindu man with whom she develops a warm friendship. The patients, who often feel isolated and excluded from society, were moved by the strong bond spanning differences in language, religion, and country between the girl and the man. 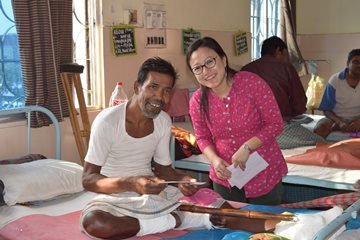 During their visit, the fellows—doctoral candidates Reep Pandi Lepcha, Sudeshna Dutta, and Purbasha Auddy and MA students Soumya Bhowmick, Mayuri Banerjee, and Kheya Samaddar—painted a wall of the hospital ward with trees, birds, flowers, and butterflies in bright colors, helping to lift the mood of the patients and staff members. They also presented board games to be used by the patients, along with handmade cards with the patients’ names on them. These gestures, demonstrating an understanding of the hospital’s work, were deeply appreciated by the staff.

Through this visit, the fellows deepened their insights into the patients’ suffering, loneliness, and isolation due to discrimination and prejudice. They vowed to continue this initiative and have already started planning their next visit. The most recent visit was made possible by financial and moral support from Sylff Program Director and Professor of Economics Joyashree Roy and former Sylff fellows.