The Tokyo Foundation had the privilege of welcoming two Sylff fellows who are exercising great leadership in their respective areas of expertise to the office on July 21, 2016. 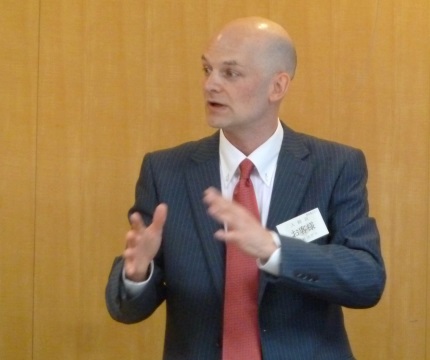 David D. Sussman, who received a Sylff fellowship in 2003 while studying for a master of arts in law and diplomacy (international relations) at the Fletcher School, Tufts University, gave an insightful presentation on his research into “Society and Personal Responsibility: Migration in an Interconnected World.”

He continued to pursue doctoral research at Fletcher and is now a lecturer at Tufts as well as working as a consultant at the Work Bank on the topic of refugee integration. His research focuses on how immigration affects people, actions, and policies in a globalized world. In his presentation, he talked about immigration from three different angles: refugee resettlement, relevance to US politics, and natural resource conflicts. He is currently conducting research on the social implications of natural resource use in Japan and the United States.

The other visitor was Bruno Maneno Kaimwa, who received a two-year Sylff fellowship in 2006–07 at the University of Deusto in Spain. After completing his doctoral program in international and intercultural studies at Deusto, he has devoted his energies to African regional development as a professor of public services at the Institute National du Batiment et Travaux Publics in his native Democratic Republic of the Congo and as a co-founder of a nonprofit organization.

He was in Japan to present a paper at the 31st International Psychology Congress on the theme of “The Dynamics of Local Diversities in the Democratic Republic of the Congo.” The visit to Japan has a very special meaning, Kaimwa said, “Because this is the tenth anniversary of my affiliation with the Sylff community.” 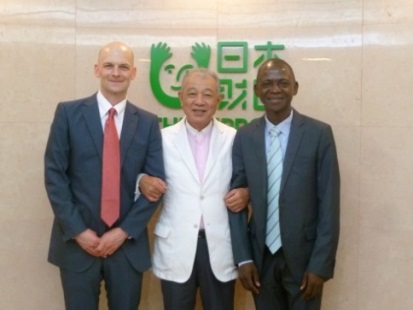 The visitors also had an opportunity to meet with Chairman Yohei Sasakawa of the Nippon Foundation. The fellows spoke about their research and career and their interests in contributing to society. Mr. Sasakawa emphasized the importance of each fellow in making a positive impact on society and in establishing synergistic networks within the Sylff community.

We are very impressed with the valuable work being performed by both fellows and are pleased that they had an opportunity to meet with Mr. Sasakawa. The Tokyo Foundation is undertaking a number of initiatives to further enrich the Sylff program and to bring the community closer together.