Evgeny Kandilarov, a 2003 Sylff fellow of Sofia University in Bulgaria, reports on the day that Chairman Yohei Sasakawa of the Nippon Foundation, the endowment donor of the Sylff Program, visited his university to receive an honorary doctoral degree in June 2016.

Conferral of a Doctor Honoris Causa 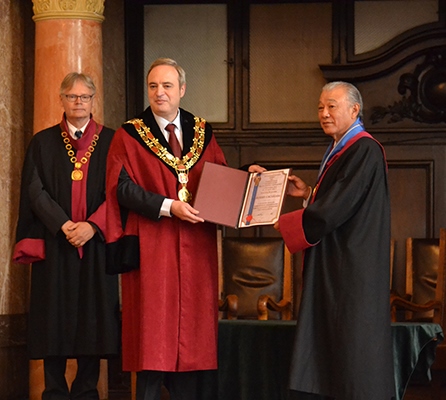 The Nippon Foundation has supported education at Sofia University since 1992, when the two institutions signed an agreement  to establish an endowment for supporting the continued education of promising young graduate students in PhD programs in the fields of humanities and social sciences. Since the 1990s, with the support of the Ryoichi Sasakawa Young Leaders Fellowship Fund (Sylff), every year around 10 students at the university have been selected to receive three-year PhD fellowships in the fields of international relations, market economy, multicultural studies, and Japanese studies. Additionally, the Sylff program now supports overseas research activities by outstanding PhD students in Asian studies, cultural studies, history, philosophy, sociology, political studies, and psychology. 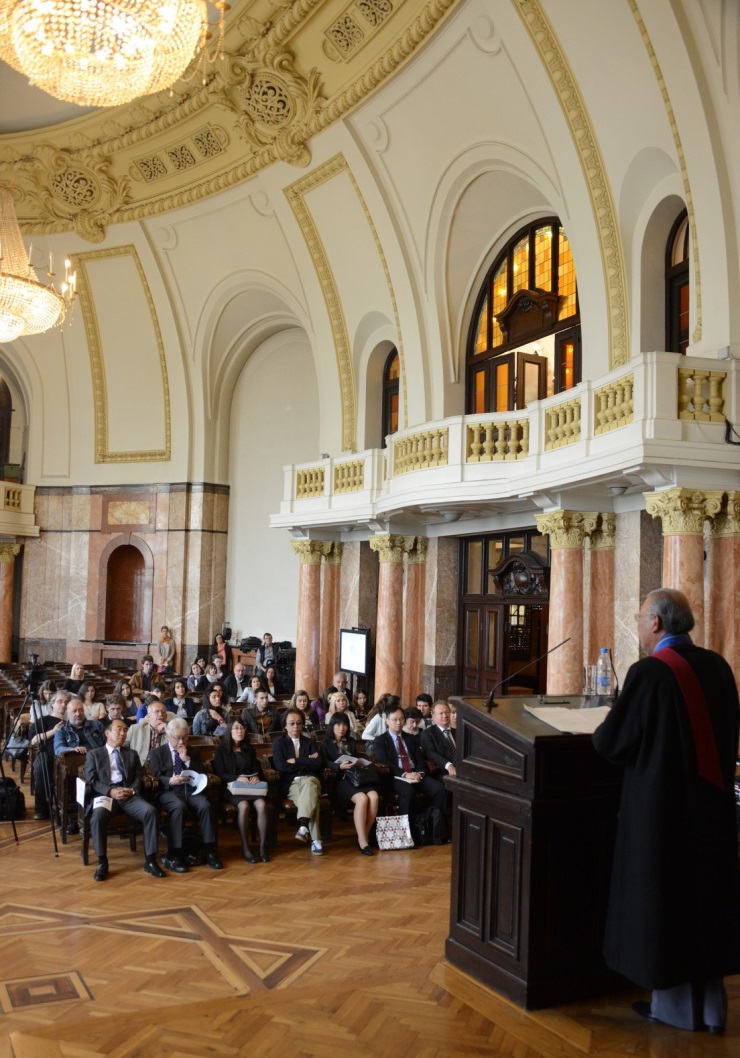 Mr. Sasakawa delivers his lecture at the Aula Magna of Sofia University

The Faculty of Classical and Contemporary Philology of Sofia University proposed the conferral of an honorary degree by the oldest and most prestigious academic institution in Bulgaria to honor Mr. Sasakawa’s longstanding support for the education of young talented students at the university.

The ceremony was attended by H.E. Mr. Takashi Koizumi, ambassador of Japan to Bulgaria, guests from Japan, and faculty and students of Sofia University.

In his acceptance speech Mr. Sasakawa, who has made a lifelong commitment to eliminating leprosy, expressed his gratitude for the honor bestowed on him and remarked on how deeply touched he was of being given the opportunity to talk in front of a Sofia University audience about the efforts he has made over the years to eliminate the disease. He followed the speech with an academic lecture titled, “Victory on Two Fronts: The Elimination of Leprosy as a Disease and as a Stigma.” The audience also watched a short video dedicated to the noble cause of Yohei Sasakawa.

After the conferment ceremony, Mr. Sasakawa and his colleagues from the Nippon Foundation attended another ceremony organized by the Japanese Studies program of Sofia University, held at the Center for Eastern Languages and Cultures. There, Mr. Sasakawa was first given a brief tour of the premises used by the Japanese Studies program, during which he was presented with the latest publications of the program’s faculty and students. The faculty, staff, students, and many current and former fellows of Sylff then warmly welcomed Mr. Sasakawa with a short ceremony. Professor Habil Alexander Fedotoff, who is the Director of the Center for Eastern Languages and Cultures as well as the coordinator of the university Sylff Steering Committee, gave some opening words expressing gratitude for Sylff’s support. Next, Associate Professor Anton Andreev, Head of the Department of East-Asian Studies and a former Sylff fellow, made a brief speech noting the exceptional opportunities and benefits that Sylff was offering, especially for the students in the Japanese Studies program. Proof of his words came from the speeches made by two of the excellent students enrolled in the Japanese Studies program, Ms. Silvia Ivanova and Mr. Martin Ivanov; Mr. Ivanov reprised the speech that won him first prize at the 2016 Japanese Language Speech Contest in Sofia.

On behalf of the Sylff fellows at Sofia University and of myself, I too presented a short speech to Mr. Sasakawa, in which I gave my most sincere congratulations for the highest honor bestowed on him from Sofia University. I also spoke a few brief words of gratitude to Mr. Sasakawa and to the Foundation itself.

It has been nearly 25 years since the Nippon Foundation became one of the most generous sponsors of our university. During a difficult transition period for Bulgaria, Sylff provided significant and indispensable help for the further development of PhD programs at the university and for the research and career development of over 100 young, excellent, and promising students. Some of them already hold key positions in Bulgaria as leading journalists, politicians, political scientists, university professors, lawyers, diplomats, and more.

It is very important that this tradition continue and that the number of Sylff fellows in Bulgaria continue to grow every year.

Personally, as a former fellow of the Sylff program, I can say that the fellowship from the Nippon Foundation perhaps played the most significant role in furthering my research interest in Japan, Japanese studies, international relations in the Far East, and East-West relations in the contemporary world. It gave me the unique chance to start working on a subject that gave me a completely new perspective of the international relations between countries and regions that developed very differently in political, socioeconomic, and cultural terms. And I hope that, through my work, I have followed and fulfilled one of the main goals of the Nippon Foundation, which is to contribute to better mutual understanding and peaceful international communication and development.

Once again, I give my most sincere thanks for the honor of being a Sylff fellow. 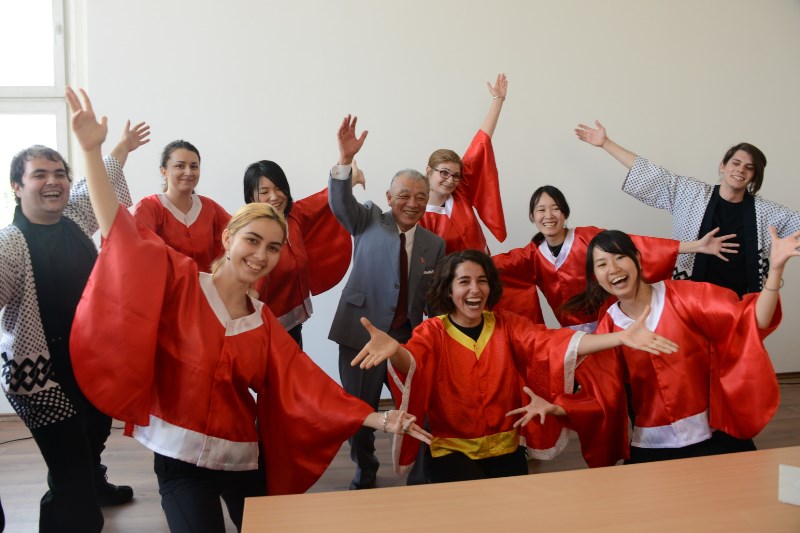 Students of the Japanese Studies program welcome Mr. Sasakawa with a Japanese dance.

At the end of my speech I reminded all of the guests and colleagues in the audience that we had established a Society of Sylff Fellows in Bulgaria (SSFB) in 2003. The goals of the association are: to create a local Sylff fellows network, establish collaboration among Sylff fellows, strengthen relations with Sofia University’s Sylff administration, make our relations with the Nippon Foundation less formal and more active, share ideas for the future activities of our association, organize topic-based seminars and other events, publish the proceedings from these seminars and thereby create a yearbook of the association, establish contacts with other local associations of Sylff fellows as a step toward forming a regional Sylff fellows network, further develop and consolidate the Bulgarian Sylff fellows association, and, last but not least, to become an active part of the global Sylff family. The SSFB has not been very active over the last several years, but Mr. Yohei Sasakawa’s visit to Bulgaria has offered a great occasion for the Bulgarian Sylff society to restart its activities.

The ceremony at the Center for Eastern Languages and Cultures closed with a short Japanese dance performed by students of the Japanese Studies program. It was a great pleasure and honor for all of us to welcome in our center such distinguished guests from the Nippon Foundation, which has contributed so much to education and research at Sofia University and particularly to the Japanese Studies program.

Evgeny Kandilarov is a Bulgarian historian and an associate professor at Sofia University “St. Kliment Ohridski”, Japanese Studies Department.  He received a Sylff fellowship in 2003 as a PhD student at Sofia University. Main areas of interest include modern and contemporary Bulgarian and world political, economic, and cultural history, focusing on the Cold War period, the Cold War in East Asia, Bulgaria and East Asian countries during the Cold War, the Sino-Soviet split and changes in the Cold War paradigm, and Japanese postwar development. He is teaching courses on: Bulgaria and Japan (Political, Economic and Cultural Relations); Japanese Modern and Contemporary Diplomacy and International relations; Japanese Technological and Innovation Development; Japanese Culture.  Evgeniy Kandilarov is author of the books: East Asia and Bulgaria. Sofia 2016, “East-West”Publishing House ; Japan – Economy, Technologies, Innovations and Management. Sofia 2012, “East-West”Publishing House (together with Prof. Nako Stefanov); Bulgaria and Japan. From The Cold War To the XXI Century. Sofia, 2009 “Damyan Yakov”Publishing House. In Sept 2015 Dr. Kandilarov received Certificate of Honor from the Ambassador of Japan in Bulgaria for contribution to introducing Japan in Bulgaria as an academic researcher, lecturer and author of books and papers.