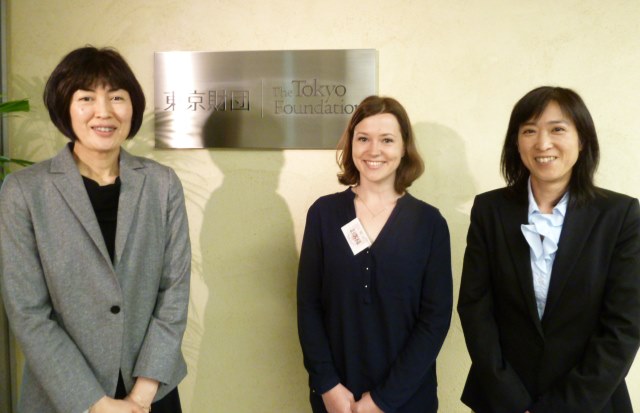 Agnieszka Batko, middle, with members of the Tokyo Foundation.

Agnieszka Batko, a current Sylff fellow at Jagiellonian University in Poland, is now conducting research on the Japan-Korea relationship at Aoyama Gakuin University in Tokyo. She is in the second year of PhD program in political science at the Jagiellonian and is focusing on the role of NGOs in promoting reconciliation between the East Asian neighbors.

She became interested in her current research topic when she participated in a group study tour to East Asia in 2015 on the theme of post-war reconciliation, organized by the Exchange Program for Regional Integration in East Asia and Europe (EPRIE) and funded by the Robert Bosch Foundation.

Jagiellonian University sees leadership potential as a vital criterion in the selection of Sylff fellows and encourages students to go abroad to broaden their perspectives. Batko has amply demonstrated this potential by leading and organizing various student activities, including a photography workshop for high school students aimed at promoting awareness of contemporary social issues.

The Sylff Association is happy to support Batko’s initiatives and wishes her great success in her research of international relations.

Sylff fellows and steering committee members are always welcome to stop by the Foundations’ office while visiting Tokyo.