Sylff@Tokyo: The Role of Public Diplomacy in Implementing Foreign Assistance 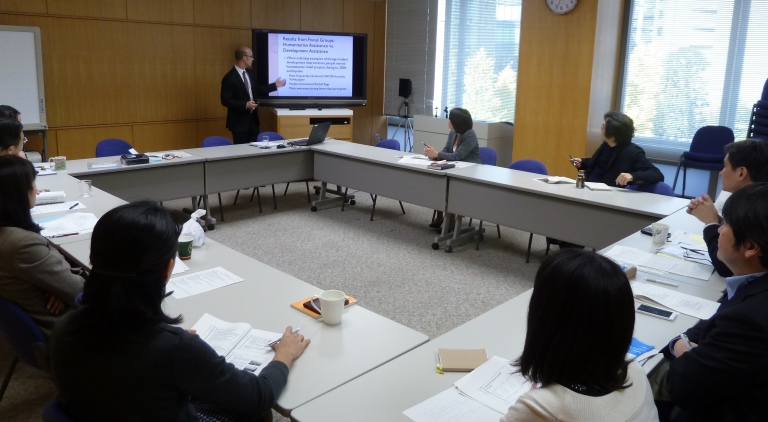 Presentation at the Tokyo Foundation.

Matthew Winters, a 2007 Sylff fellowship recipient at Columbia University who is currently an associate professor in the Department of Political Science at the University of Illinois at Urbana-Champaign, visited the Tokyo Foundation during his sabbatical as a Council on Foreign Relations/Hitachi International Affairs Fellow. He conducted research at the National Graduate Institute for Policy Studies in Tokyo for three months from August 2016.

During his visit, he gave a presentation on “Japan’s Local Public Diplomacy in Sub-Saharan Africa: Evidence from Uganda,” focusing on the effectiveness of communication efforts regarding the provision of externally funded and non-state-implemented services. In order to survey the role of public diplomacy in development interventions, he implemented an interview-based survey targeting randomly selected citizens, asking them about the Grant Assistance for Grassroots Human Security Projects (GGP) program of Japan’s official development assistance. This research design incorporated a verification experiment enabling him to draw inferences on the dissemination of information about GGP.

The survey results showed that the source of GGP funding was not recognized by Ugandan respondents, despites the prominent branding initiatives taken by Japan. People had low expectations of the project, since most believed it was implemented by their local government. They viewed the project more favorably, however, when they learned that Japan was the original funding source. The survey revealed, therefore, that information about foreign funding can improve perceptions of the local government’s capacity, since local residents have a positive image of foreign involvement. Winters plans to continue his research on how average Ugandans think about the role of their local government in securing resources from abroad and its impact on the local community.

The Sylff fellow also had an opportunity to meet with Chairman Yohei Sasakawa of the Sylff Association, who is actively engaged in addressing international issues as special envoy of the government of Japan for national reconciliation in Myanmar. Winters is also familiar with East Asia though his extensive fieldwork in Indonesia, and the two exchanged views on the best form of foreign assistance, particularly for Southeast Asia.