Journey of the Soul to Nurture Future Leaders

Future leaders of Asia gathered in Orissa, India, to share experiences and ideas on problems facing Asia. Muhammad Ilham from the University of Indonesia participated in “Building a Better Asia,” which is a biannual retreat for recipients of Sylff and other scholarships from the Nippon Foundation. The purpose of the dialogue was to nurture the leaders of Asia and to build a brighter future for Asia.

Lessons Learned from the BABA Retreat in Orissa, India 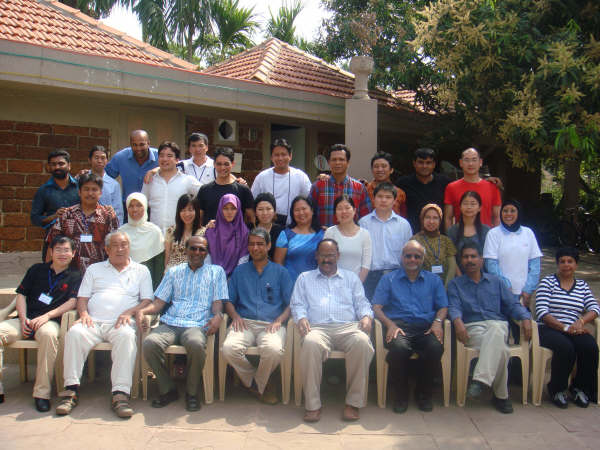 The purpose of this article is to express my feelings and thoughts about the BABA V Retreat. Conducted in Orissa, India, from February 8 to 14, 2009, this event brought together representatives from various countries in Asia and descendants of Asians around the world who felt it was their concern to build a better Asia and a safer world. The Nippon Foundation, as the initiator/organizer, selected former and current scholarship fellows to sit down together to share experiences and ideas on problems facing Asia these days. Present at the event were 20 participants and two facilitators, of whom at least eight were Sylff fellows. Several resource persons also contributed to this event. This initiative is a pinpoint effort given the current situation in which Asia is still full of problems. As the world economy declines, countries in Asia are the focus of greater attention with all of the potentials this region has.

Entering the event, I had several questions in my mind: What are likely to be the common problems we have to deal with in the future? What kind of leadership and efforts do we need to address them? And most importantly, what can I learn from this event that will benefit the people of my country, Indonesia, and the world?

As the BABA V Retreat was conducted right at the time the world economic crisis was spreading at an extremely rapid pace, the participants were also very concerned about this. Triggered by the economic meltdown of the United States, Asia also felt the impact of the economic crisis with exports slumping due to the decline in purchasing power of the US domestic market. This, in turn, led to companies in Asian countries falling into bankruptcy, with increasing unemployment and poverty. This dealt a heavy blow on developing countries in Asia, where, even without this current crisis, there are already so many classic problems such as deforestation, terrorism, trafficking, poverty, corruption, conflict, human rights violations, and poor health care. Good cooperation and regional collaboration are the keys to overcome these problems.

The BABA V Retreat could be an example of an initiative to start a simple model of cooperation and collaboration to address the problems in question. The diversity of background and expertise of the participants are a great blend. It is also important for them as the young generation of leaders to work without political restraint and narrow-minded nationalism in order to make greater contributions to a better Asia.

The intimacy of the participants during the event and the ideas that emerge are good starting points for this collaboration. Of worthy mention here is that we successfully formulated a map of a practical vision for Asia in five to ten years to come (such as a Green Asia, Asia without conflict, and a corruption-free environment) and formed working groups to carry on the post-BABA Retreat outcomes. However many things still need to be sharpened in order to implement them in a more concrete manner.

The current challenge is how we can shape and continue coordination and communication among us who live so many miles apart. This is not only because we face, on our return to our respective countries, work that has piled up during our absence. There are also many things formulated during the BABA V Retreat that are still too raw to proceed with in a proper manner. Individual initiatives and strong leadership of each working group are keys to continuously connect and move on together. At this point I would like to suggest to the next BABA Retreat that it would be better to have more time than what we had in Orissa to develop a collaborative action plan since it is necessary to have everything set up and ready before the conclusion of the event. <

Leadership for the Future

Let me start with a simple notion that the main contributors to the recurring problems in many countries in Asia are, in the first place, their leaders. At least until now, governmental, political, and social leaders have too often become part of the problem. Some of them do not have good leadership vision; some do not have any concerns about peoples’ interests; some are corrupt; some do not do anything other than maintain their power; and some are also very weak or totalitarian. We do not celebrate their traits. But we want them as part of the solution.

The BABA V Retreat taught us important lessons on leadership. One of the lessons was that future leaders must act promptly and start from problems in surrounding areas. Visiting artisan communities in poor villages in Orissa, we visited the Darbar Sahitya Sansat (DSS), a local NGO that has a long story of success in economic empowerment. The DSS’s organizers started this initiative from a very young age when some of them were still in universities or were fresh graduates. They first stood up to help survivors of a massive flood in their village and after that, they have never looked back.

They went on a relentless effort to improve the livelihood of the poor in Orissa. This is very tricky since poverty in many cultures and societies is often considered a matter of laziness, fate, and even a curse. 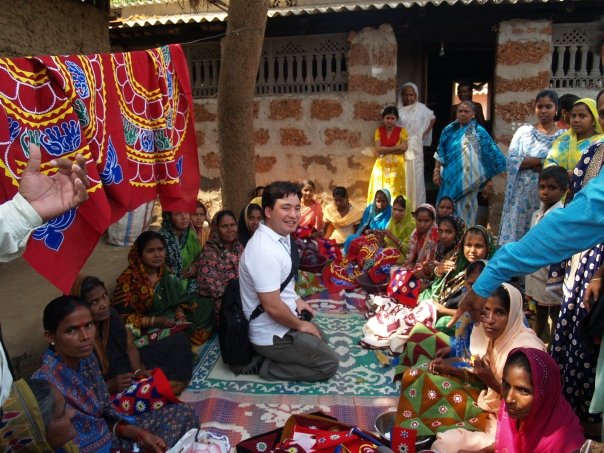 In addition, many also think that it is solely the responsibility of the governments or generous and wealthy people to help the poor. Those ideas never appear in the DSS dictionary. Poverty for them is always structural and alleviating it is part of their life struggle. They speak out loudly on how would it be possible for the poor to increase their income if they had never received support from others, especially when the capitalist state systematically shuts their windows of opportunity. Poor people in India very often have difficulties in gaining access to conventional credit banks because of their poverty, illiteracy, absence of collateral, and other factors.

To overcome this problem, community organizers of DSS provide micro credit for the poor and manage it in small self-help groups of women. The groups themselves are their collateral and choosing women as members is important here since they are more trusty and careful to their families than men usually are. By doing so, DSS gives assistance to the poor without making them dependant. On the contrary, the poor women are able to increase their income as well as manage to empower themselves to contribute to their livelihood. This is not charity as casual observers may think. This is the basic concept of community empowerment.

How BABA Retreat Affects Me

There is no doubt that The BABA V Retreat impressed me very much. This was not only because I was able to meet such great people, but also due to the lessons I learned in relation to my work and worldview.

My encounter with NGO activists in Orissa truly reaffirms my belief. It is true that there are many ways to change the world, but it always begins with your choice. After graduating from a university, there are many options available. To choose working in an NGO is not popular enough in Indonesia although many NGOs operate here. For many of us, especially in the past, being an activist is full of repression and depression. Also, there is always uncertainty about the future. It takes courage and much fortitude to walk the path. Nevertheless, representing the voice of civil society is the highest of honors. As long as I am able to maintain my passion, I will not fade away.

Furthermore, we are not alone. It is very clear that there are still many never-ending problems in Asia. However, the BABA V Retreat made a bold statement of togetherness. In every place, time, and level there are people who have already put all their strengths into this. So it is now time for us to transform this togetherness into a strategic collaboration for the future.

Discussions and other activities with all the participants and resource persons during the event also pointed out that no matter how understanding a big mind is, it is the soul that is the true guide. What is amazing about the BABA V is that, to me, the people there just showed so much passion and courage stemming from their huge hearts. This was enlightening for me as I had been lost in despair seeing hard facts when working in humanitarian projects. For a long time I have criticized what happened in Aceh, the area most affected by the tsunami that hit Indonesia in December 2004. Although 8 billion US dollars poured into the area, the number of poor people before and after the tsunami remains the same. Where is the impact of this huge influx of money on the grassroots?

So much money intended to mitigate the post-tsunami disaster and rebuild a better Aceh is being misallocated or corrupted. The utmost mandate for post-tsunami reconstruction is to rebuild the homes and livelihoods of the survivors along with related infrastructures, but only a very small portion of the funds goes to livelihood projects, and even much less for monitoring efforts. The shift in priority toward building mega projects is not in the best interest of most of the people. Could we say this reconstruction is successful when the most benefits are for the rich and the ruler on one hand, and the projects negate transparency, accountability, and community participation on the other hand? Since the post-tsunami projects are led and managed by educated people, they are responsible for this distressed condition. They have the power, money, expertise, and everything else to prevent all this misery from happening. But they did not do anything. Bottom line: you may teach someone to have brilliant knowledge, but that smartness can be used to fool people. A true, beautiful mind is one that is guided by the soul.

During the BABA V Retreat, my encounter with those great people with enormous talent, life trajectory, skill, courage, and experience convinced me about my true self and what I should do in the future. I have learned so many things from them that I am now more than confident that we will see a better future for Asia as long as we can go hand in hand to overcome the problems and passionately maintain our life goals.

“Voices from the Sylff Community” is a space showcasing the activities and opinions of Sylff fellows and faculty members. We have received contributions from fellows and faculty members all over the world. We are looking forward to sharing YOUR voices with people around the world, including global issues with local perspective, grassroots issues requiring global attention, and your first-hand experience. For further details, please click here.

Past Program: BABA
Muhammad Ilham Baharuddin Saenong is presently working as communication specialist as well as program secretary at Transparency International-Indonesia, Aceh Office. He was awarded the Sasakawa Young Leaders Fellowship Fund (Sylff) of the Tokyo Foundation, Japan, from 2001 to 2003 to complete his Master’s degree in Anthropology at the University of Indonesia, Jakarta. His interest lies on humanitarian work and social activism. Since 2006 he has been working to support and monitor post-tsunami reconstruction projects in Aceh, Indonesia.