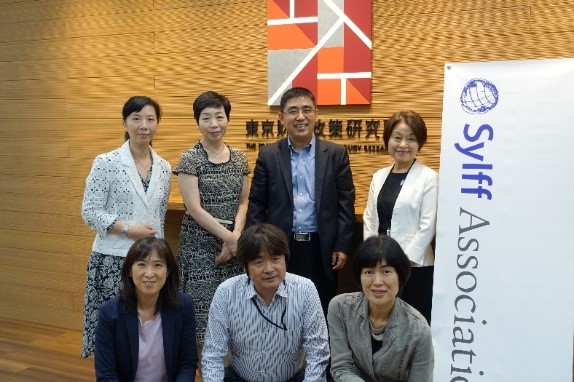 Guo, standing center, and his wife, standing far left, with members of the Sylff Association secretariat.

On Monday, August 27, 2018, Mr. Guo Xuetang, Sylff fellow (1997) at Fudan University, visited the Sylff Association secretariat in Tokyo. He is currently director of the Institute of International Strategy and Policy Analysis and professor of international relations at the Law School of the Shanghai University of International Business and Economics.

The Association had not been able to contact him for many years, but this past spring, Fudan University invited him to attend Sylff’s twenty-fifth anniversary ceremony and commemorative symposium on June 30 at Peking University. The date coincided with a business trip to India, but he was able to attend a separate anniversary event at Fudan University on July 5. His image of Sylff from his student days was completely transformed, he told members of the Sylff Association secretariat during the Fudan gathering, and he is now eager to renew his ties with Sylff. 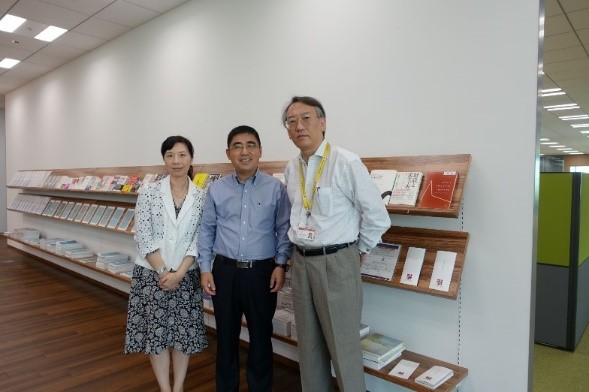 This was Guo’s first visit to Japan. He was on a holiday and was accompanying his wife, a medical doctor who was making presentations at healthcare symposiums in Nagoya and Shizuoka. Although he had never been to Japan, his research frequently involved the country, as his master’s thesis was about Northeast Asian security and the Korean Peninsula in the early 1990s, focusing on China-US relations. At the Tokyo Foundation for Policy Research (Sylff Association secretariat), he met with Ke Long, a senior fellow who is an expert on the Chinese economy. They had a lively exchange of views on Japan-China relations.

He also met with members of the secretariat and shared his experience and ideas on ways to connect with more Chinese Sylff fellows.

We wish him much success and hope that he will play a central role in reaching out to Chinese Sylff fellows.