Keio University fellow Yutaka Tokushima—who became the first recipient of a Sylff Project Grant (SPG) in 2018 for an initiative to provide affordable 3D-printed prosthetic legs—recently completed the second year of his project. The grant enabled him to form a partnership with a university hospital in the Philippines to improve the functions of the prostheses by conducting usability trials with 49 patients. In 2019, he continued to produce and provide artificial limbs while also reaching out to local governments, donors, and the national insurance commission to help expand his project. The following is Tokushima’s account of some of the difficulties he encountered and the knowledge he gained over the past two years, which have engendered new aspirations and prospects. A video introducing his activities can be viewed here (YouTube channel) or by clicking the link below.

I am currently advancing an ultra-low-cost, 3D-printed prostheses project in the Philippines. The 3D-CAD software and 3D printer that we developed for prostheses can create a prosthetic leg from suitable materials (filaments) using data from a 3D scanner. At present, the price of producing one leg is 20,000 pesos (about US$400), roughly a tenth the average price of a conventional prosthesis and equivalent to the starting salary for a college graduate in the Philippines—making it affordable to the local people who in the past were not able to buy one.

In the past, prosthetic limb manufacturing required the patient to visit a production facility many times over several weeks, but 3D printing takes about 24 hours from scanning to production, so the patient only needs to visit the clinic twice; once for the diagnosis and again to pick up the leg.

What initially got me involved in this project was my experience working in Bohol, a small rural village in the Philippines, as a member of the Japan Overseas Cooperation Volunteers (JOCV) between 2012 and 2014.

Diabetes was prevalent among the poor there. Without the means to go to a hospital, they would not get regular medical checkups. Illnesses would get neglected, resulting in diabetic gangrene and forcing people to amputate their limbs or die from not being able to, as many actually did. Visiting the rural clinics where I was assigned as a volunteer, I discovered that about 1% of the residents had decaying legs. The major cause of this can be attributed to their eating habits. Poverty did not provide for more than a very small amount of salty fish or meat to go with a large amount of rice, resulting in an excessive intake of carbohydrates.

There are only three public facilities in the Philippines that manufacture prosthetics. During my research I asked people who had left their gangrene unattended why they did not get medical attention. I suggested that leaving the leg unattended might kill them, but most had no reply, their faces telling me that they had largely given up on life. Getting an amputation would only mean lying around at home because they could not afford prosthetics. They would just become one more mouth to feed, so they were better off dead. I was saddened and shocked when I first realized their plight.

From this experience, I decided to develop ultra-low-cost prostheses that could be made in emerging countries and purchased by anyone. I thought that this could save people all over the world who, like the diabetic gangrene patients I had met, had decaying legs but were not able to do anything about it. 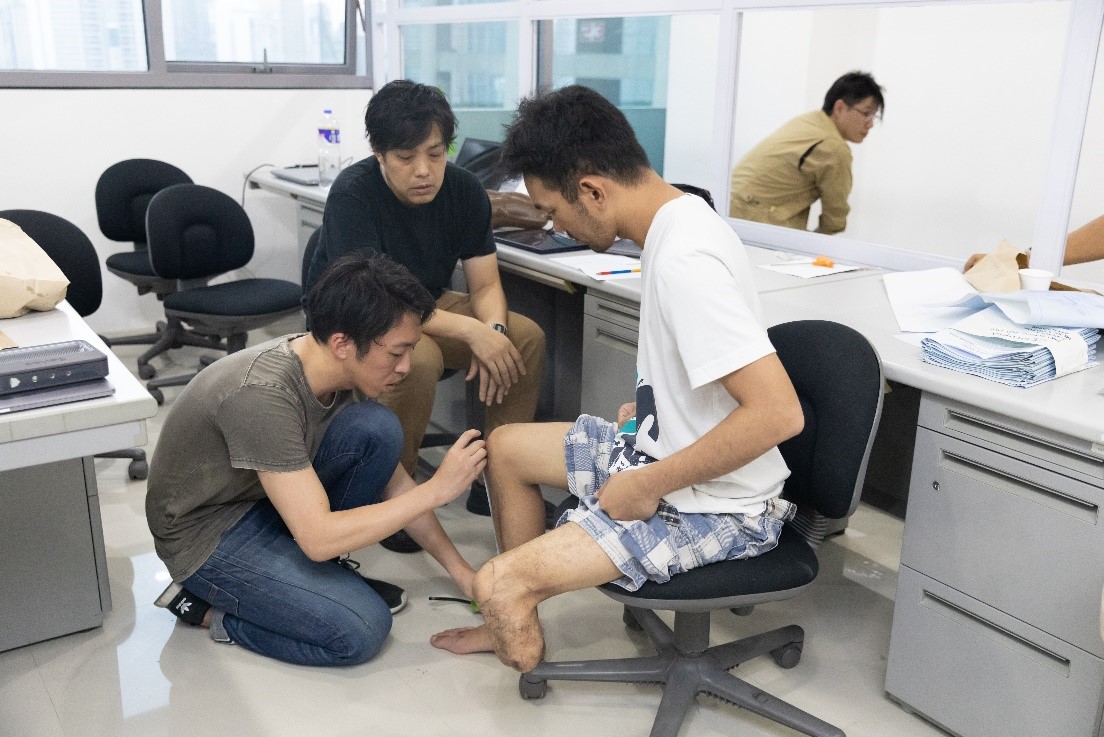 Carefully measuring the dimensions of a patient’s leg. 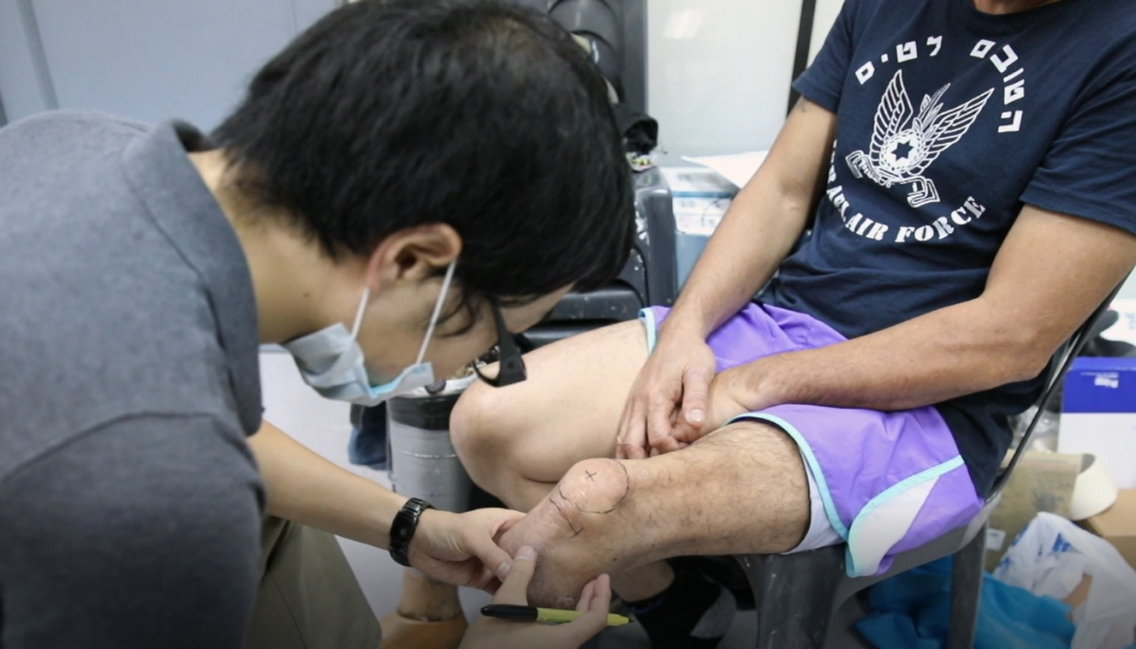 Understanding the structure of a patient’s leg. 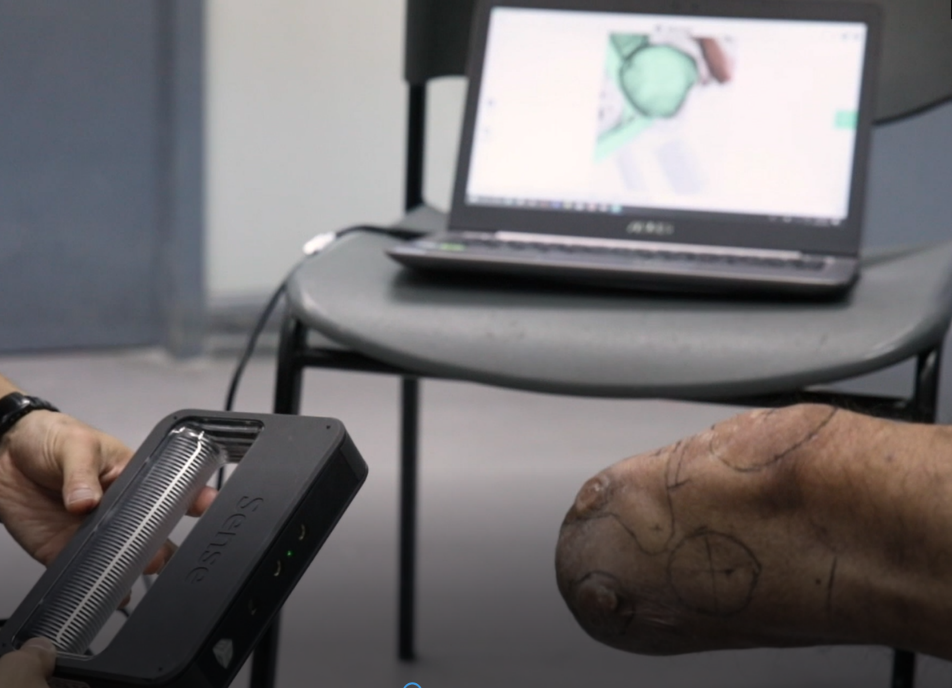 I started by examining a wide range of possibilities regarding prosthetic limb production in emerging countries, including the use of construction waste, bamboo, and other readily available materials. I finally came to the conclusion that 3D-printer manufacturing was the best way to balance functionality and price to meet the demands of prosthetic leg production in developing countries. However, there were many problems in terms of quality and cost in designing and manufacturing prostheses similar to existing types using commercially available 3D-CAD software and 3D printers.

After I returned to Japan in 2015, as a Sylff fellow at Keio University, I started developing 3D-CAD software and 3D printers specifically for prosthetic limbs that could overcome these issues. I set out to develop 3D-CAD software and a 3D printer exclusively for prosthetic 3D printing, eliminating all extra features and applications of commercial printers—a process that took three years.

From fiscal 2018, thanks to the Sylff Project Grant and in cooperation with the University of Philippines, Philippines General Hospital (UP-PGH), we conducted material strength tests to secure patient safety and usability tests to obtain medical evidence while advancing preparations for local production.

In the usability tests, we asked 49 patients to wear our 3D-printed prostheses for three months while living as before. Compared to conventional prostheses for emerging countries, we were able to achieve a 128% functional improvement (based on patient evaluation using a prosthesis evaluation questionnaire).

Based on these results, in fiscal 2019, we started local production in the Philippines for the purpose of manufacturing and selling 3D-printed prosthetic legs in emerging countries. As of December 2019, we have been able to deliver approximately 20 prostheses per month to amputees in metropolitan areas in the Philippines, and 112 people now use our prostheses. We are aiming to reach annual production of 1,000 units in fiscal 2020. 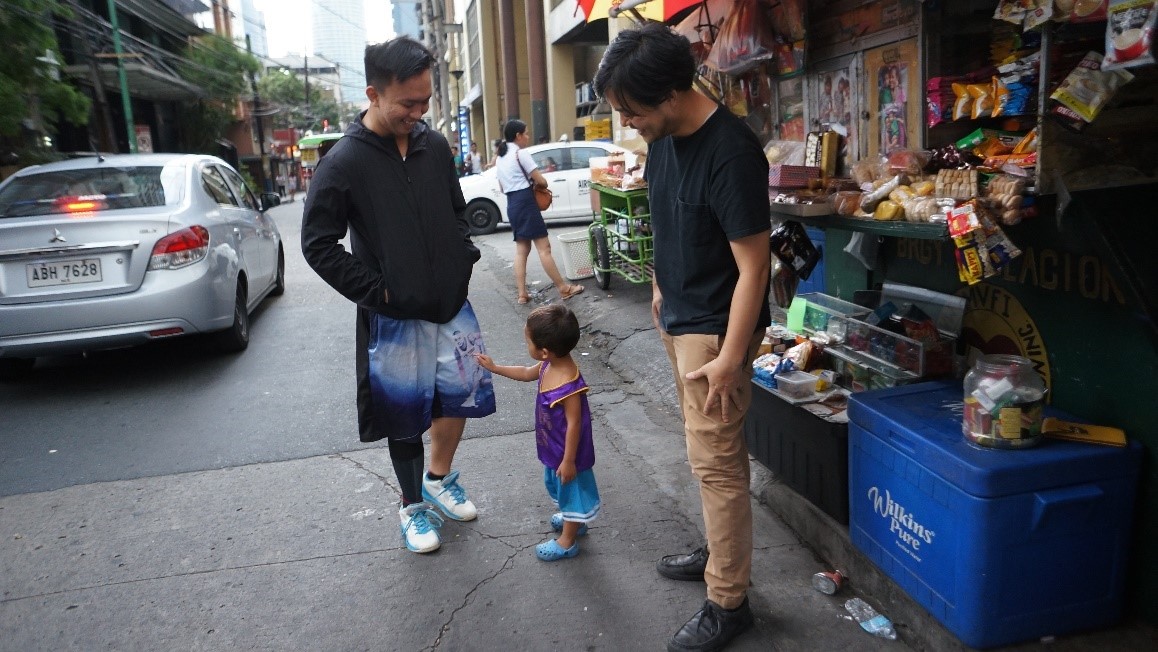 Visiting a patient who has started wearing a prosthetic leg.

A patient is able to climb up and down steep steps after regaining a normal lifestyle.

Thus far, the people using our prostheses have been limited to those living in metropolitan areas who are middle- to high-income earners. As such, we can hardly say that the prosthetic problem in the Philippines has been resolved.

My next step is to deliver our prosthetic legs to amputees not only in Metropolitan Manila but also those in remote areas like Bohol, where I had previously served as a volunteer, and in the poorest areas where people cannot afford a $400 prosthesis.

This is why I established the Instalimb Foundation, a nongovernmental organization whose mission is to develop a new distribution model for prostheses delivery catering to those who live in remote areas and who cannot pay $400 for an artificial limb and to implement this model as a social business.

Through the activities of this organization, I hope to establish a sustainable system to ensure that all people who require prosthetic limbs, including the poor in developing countries, have access to them, starting with the Philippines in fiscal 2020. 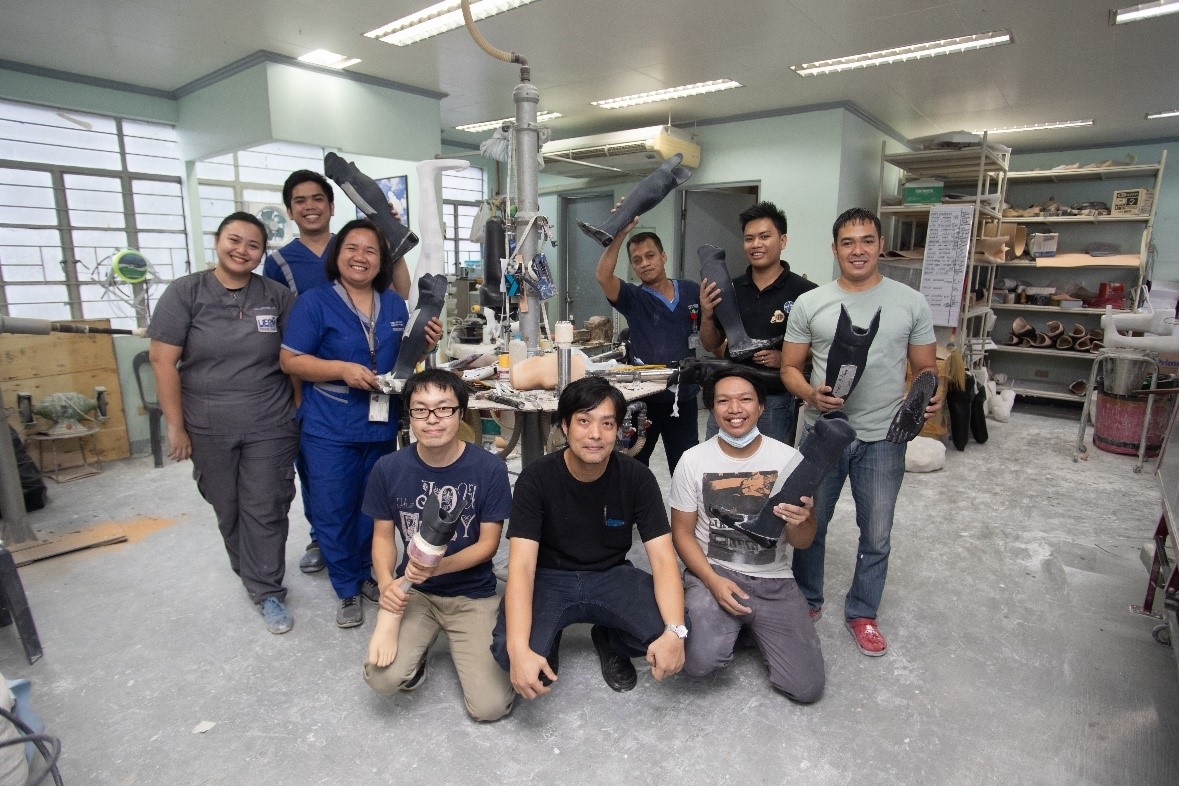 With fellow's project members and cooperators.

As for our performance in fiscal 2019, five leg amputation patients were referred to us from local governments, and contributions from local donors were enough to pay for 12 prosthetic legs. Next year, we hope to expand our cooperation with local groups throughout the Philippines.

We have also begun approaching central government agencies in the Philippines, such as the Department of Health and the Department of Trade and Industry, as well as relevant Japanese ministries, such as the Ministry of Economy, Trade, and Industry and the Ministry of Health, Labor, and Welfare, to have our prostheses distribution model incorporated in the PhilHealth government health insurance framework that is being advanced by the Philippine Insurance Commission.

We will continue to consult with stakeholders and make policy recommendations in the hopes of quickly realizing a social system capable of providing prosthetic legs to all amputees in the Philippines.

Yutaka Tokushima is the chief executive officer of Instalimb. He worked as a fabrication designer for Nihon Kohden Corp. before starting up Instalimb to commercialize a process for fabricating prosthetic legs from plastic using 3D printers and machine learning. Although machine learning has previously been used in the fabrication of individual parts for prosthetic limbs, Tokushima’s system is the only digital process for fabricating an entire prosthetic leg from plastic.

This is fantastic what a way to aid humanity. -Althea Whitaker-