Humanitarian Assistance in Middle East and North Africa: The Cases of Hungary and Turkey

Tamas Dudlak, a 2021 Sylff fellow, offers a comparative view of the foreign aid policies of Hungary and Turkey, particularly in the Middle East and North Africa. The former focuses its efforts on protecting Christians, while the latter primarily supports Sunni Muslims, each with a different set of motivating factors. Dudlak also discusses differences between these “emerging donors” and traditional Western donors, such as in their approach to aid distribution and how they are seen by recipients.

Recently, many have suggested similarities between Turkish and Hungarian political developments in the recent decade.[1] However, few have attempted an in-depth comparative analysis of the political systems of the two countries. In my research, I compare the characteristics of and recent trends in the foreign aid policies of Hungary and Turkey, focusing specifically on their activities in the Middle East and North Africa (MENA) region.

This issue is particularly relevant in the era of mass migration and the existence of a conflict zone along Europe’s southern and eastern borders. It is essential that Hungary, as part of the European Union, and Turkey, as a stable political system in the Mediterranean, coordinate their development policy concepts concerning the southern and eastern crisis zones. To do so, it is necessary to understand the factors that motivate each to develop an increasingly prominent humanitarian policy. 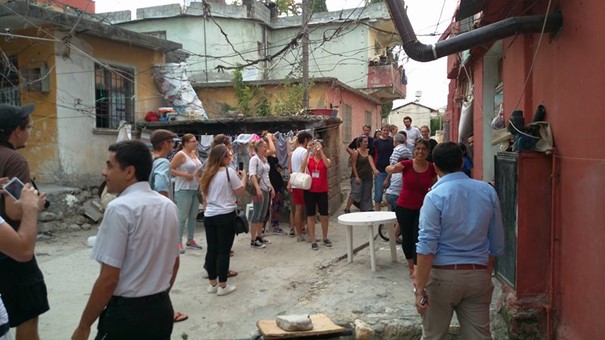 A Syrian neighborhood in Hatay, visited by the author in 2016.

Landscape of Foreign Aid in Turkey and Hungary

Various government-affiliated and government-related organizations and projects in Turkey and Hungary are prominent in distributing different types of foreign aid. These are, on the Turkish side, AFAD (Disaster and Emergency Management Presidency), TİKA (Turkish Cooperation and Coordination Agency), Diyanet (Presidency of Religious Affairs), and Türkiye Bursları (scholarship program of Turkey for international students); and on the Hungarian side, Hungary Helps, Hungarian Red Cross, Stipendium Hungaricum (scholarship program of Hungary for international students), and various humanitarian programs of the Hungarian churches. The fields of action of these state agencies and government-related organizations range from disaster relief aid, education assistance, post-conflict reconstruction, and direct investment to culturally related assistance (in such areas as language or religion) for conflict-ridden communities.

Turkey has already pursued an active policy in its neighboring Syrian territories during the expansion of the Middle Eastern conflict zone (especially from 2011 onward) and has engaged in an increasingly broader humanitarian policy during the protracted war in its immediate neighborhood.

Compared to Turkey, the Hungarian leadership realized the importance of active and coherent humanitarian action in the Middle East. This was because the 2015 migration crisis prompted a reassessment of the role of the potential migrant-sending countries in the Hungarian political discourse, making it in the country’s interest to assist conflict-affected areas. In the Hungarian government’s view, given the country’s limited financial and material capacities and limited public support for such activities in remote areas, this can best be done by assisting Christians in the Middle East and Africa to minimize migration in these conflict-affected areas.

Another reason for the increased Hungarian and Turkish activism in these previously neglected areas is that both countries have started to build up their relations with governments and local representatives of emerging countries beyond their traditional Atlantic relations, a development that undoubtedly serves economic and political interests (diversification of relations). The economic crisis of 2008 and the shift in international power (the growth of China and the rise of regional middle powers) have further reinforced the process whereby the European periphery—Hungary and Turkey—is forging its own mechanisms for direct relations with developing countries.

In the case of underdeveloped bilateral relations, one of the most effective ways of doing this is to provide targeted assistance to these countries in the form of joint investments or development projects, as such joint platforms also help to get to know each other and thus pave the way for institutional (permanent) economic and political relations.

As emerging donors, both Hungary and Turkey have a strong humanitarian presence relative to their economic and political weight, and the MENA region is a priority area for their humanitarian aid programs. Turkey is often referred to as the most generous country. This is evidenced by the fact that in 2017, Ankara spent the world’s highest proportion (1%) of total GDP on humanitarian assistance.[2] This active engagement is an integral part of international image building for Turkey, which is aspiring to be a global peace broker and a development state.

Hungary’s niche policy is mainly conducted through the Hungary Helps program,[3] which focuses its humanitarian action on a specific type of community, namely persecuted or endangered Christian communities in the Middle East. As this target group represents only a minor part of the populous Middle East, Budapest could achieve spectacular successes with a relatively small amount of money even while minimizing its political interventions in the target countries.

There is a difference between the “Western”actors, referred to in the literature as “traditional donors,” and the “emerging donors” in their approach to foreign aid distribution.[4] Traditional donor countries have a rather strategic approach, working in well-defined, “safe”areas where the impact of their activities can be well assessed and unnecessary complications with local powers can be avoided. 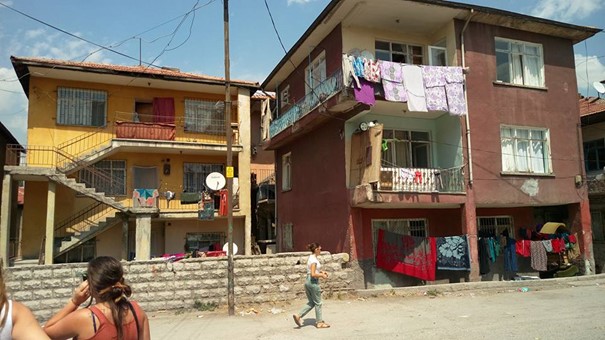 A Syrian neighborhood in Ankara during a visit by the author in 2016.

By comparison, new aid donors have adopted a more structuralist-functionalist approach. They tend to rely on the cultural links with locals, shared experiences, and common identities (soft power elements). New types of donors often take risks, both in terms of the choice of the target area and in terms of the lower degree of cooperation, or embeddedness, with local authorities. The latter is clearly due to their lack of contacts and, in this context, their weaker political advocacy skills.

Turkey and Hungary are “new” donors with a relatively clean slate and are more reliable for the locals than traditional Western donors with imperialist ties. These two countries have the advantage of implementing services of Western quality and techniques with a non-Western attitude and background—that is, they do not attach conditions to humanitarian aid such as the rule of law, democracy, and some degree of liberal market economy.

For both countries, the areas in which they are active in their foreign aid policies—supporting Sunni Muslims in the case of Turkey, the protection of Christians in the case of Hungary—play an essential role in the domestic process of seeking identity. The political leadership of both countries is striving to serve as a model for the international community. Although the aim of humanitarian aid is the same (civilizational discourse), the emphasis differs: for Turkey, active foreign aid policy is more an attribute of its middle power status and a cornerstone of its security, while for Hungary, growing involvement in humanitarian activities is primarily intended to strengthen the coherence of the government’s migration policy.

Accordingly, potential migrant communities should be assisted locally and thus encouraged to stay in their original environment, which requires development of infrastructure (such as schools, hospitals, churches, and public utilities) in the war-torn countries of the Middle East. Moreover, the Hungarian government defines itself as a Christian democracy; thus, it cannot be indifferent to Christians living under persecution and in conflict-ridden areas. This is reinforced by the discursive effort of Viktor Orbán to present Hungary as a “defender of Christianity.”[5]

Hungary and Turkey constitute emerging donors with vast opportunities in the international humanitarian aid arena. The current governments of the two countries made significant steps toward improving the visibility of their respective countries in line with the ideological background of the political leadership. These are only the first steps toward lasting relationships between donors and recipients, and only the future can tell the pace and direction of institutionalization of humanitarian assistance policies in these countries.

Tamas Dudlak is a Ph.D. candidate studying International Relations and Geopolitics based in Budapest, Hungary. He previously studied History, Arabic, and Turkish. His research focuses mainly on Turkey and its role in the Middle East in various fields: migration and refugees, domestic and foreign policy, energy policy. Moreover, he examines the bilateral relations of Hungary and Turkey as well. His dissertation deals with the changing political and economic ties between Turkey and Iraqi Kurdistan (1991–2017).
https://www.linkedin.com/in/tam%C3%A1s-dudl%C3%A1k-ab031169/
https://uni-corvinus.academia.edu/Tam%C3%A1sDudl%C3%A1k
https://www.researchgate.net/profile/Tamas-Dudlak