The COVID-19 Pandemic in the Islands

The University of the South Pacific

Maria Riwana Sahib, a 2012–13 Sylff fellow, looks back on how the COVID-19 situation unfolded in her native Fiji. As has been the case everywhere, the pandemic’s impact on the Fijian economy amplified the issues of domestic violence, unemployment, and xenophobia and affected school education. But the silver lining, Sahib says, has been the revival of the barter system, which has helped many weather the pandemic storm.

Living in the Pacific Islands has many advantages and disadvantages. It is probably one of the most unsafe places when it comes to infectious diseases. Historically, populations have been depleted by infectious diseases due to our geographical location, that is, our isolation. But COVID-19, or the novel coronavirus, has changed the course of history in the modern age of technology and globalization. It has certainly caused a paradigm shift in terms of how we conduct our business and our lives. It is one of the many experiences throughout my life that has been etched in my memory, and as a millennial, it is one of the most interesting times.

I have worked and lived in the Republic of the Marshall Islands away from my island home of Fiji for the last seven years. In early 2020, I was contemplating returning home, unsure of my future and unaware of the realities that would follow. The novel coronavirus was declared a pandemic in March 2020, right around when I booked my flight back to Fiji. The flight was during the week in which the Marshall Islands declared that it was closing its borders. Subsequently, all flights going into and out of the islands were canceled. In this haste of closing the borders, many tourists in Majuro, the capital of the Marshall Islands, were stranded with no guarantee of the next available flight out. Among the stranded was me! My heart sank as I read the email from Nauru Airlines two days prior to the flight day, in which it provided options for the next available dates of flights going out of Majuro. I felt helpless and frustrated. I remember my friends Laisa, Kelesi, and Melba encouraging me and filling me with positivity. I believed more in their faith than I did my own.

I would like to believe that their prayers and mine were answered, as I sat in the last flight out of Majuro two days later. It was an eight-hour flight with two stopovers before I finally reached Nadi, three hours away from Suva, my home. Although I had come back numerous times before, it had never felt the way it did that day when the plane landed at Nadi International Airport. I was home, finally! The anxiety, the fear, the dreading had all been over, and I felt a weight had been lifted from my chest. I was finally home to see my beautiful daughter. She was initially the reason for my return, but I think the pandemic fueled my decision to return promptly.

Fiji went into lockdown one week after my return, as a case was soon discovered. People immediately went into panic mode, and naturally, panic buying followed. During the lockdown, a curfew was implemented together with movement restrictions and social distancing. These actions resonated with many countries where the coronavirus had spread. This was when reality hit home—that we were as vulnerable as the most developed countries, where the virus had far worse effect. I couldn’t help but wonder if this was a way of mother nature telling us that we needed to slow down our development and put a brake on exploiting our natural resources, contributing to the greenhouse effect, and harming our planet.

The economic downturn due to the virus had serious implications for the tourism industry (the largest revenue generator) in Fiji, and this affected thousands and thousands of Fijians. COVID-19 has led to an increase in social issues such as domestic violence, unemployment, and even xenophobia toward the Chinese people. The restriction measures brought out the best and worst in people including me. Fearing for the lives of our loved ones and taking to social media to hit back at people who broke the restriction measures were some of the traits displayed that I am sad about. I, for one, always try to empathize with people and their situations, but during this particular occasion it became clear that the worst in us could be brought out even when we try to the find the best in others. 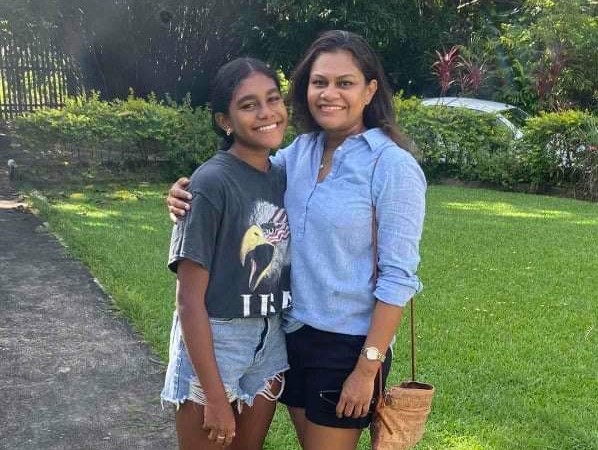 Sahib and her daughter.

COVID-19 also affected the way education was conducted. My daughter’s private school was prepared to provide full-time online classes, as they already were using online platforms for learning at school. The transition to schooling full-time from home was a big adjustment for both my daughter and me. I am a single parent. Firstly, home is a place for relaxation, and it did not mesh well with the idea of schooling. Secondly, focusing on your own work while supervising your child’s schoolwork can sometimes be challenging when you both have deadlines to meet. It took me a while to adjust myself first before I could start focusing on my child. So instead of writing up a schedule, I followed a routine while flexibly switching the times of doing assignments and researching. My daughter usually had her scheduled Zoom classes (Zoom became a boom in 2020) in the early mornings. That would leave me some time to get my work organized.

I could not help but wonder about those who did not have the convenience of good Internet connections and those who could not afford the Internet. Schools were closed indefinitely as the government kept extending the opening date of normal school hours. The government went into overdrive and maximized their resources to provide subject lessons via Walesi, Fiji’s digital television service. This proved useful but to some extent only; students still had to print their notes and submit assignments at school, which meant mobility and exposure to the virus. The pandemic undeniably brought many social challenges, and it has been an economically trying time for many.

There is always a silver lining in a grim situation, they say. An ancient system was reintroduced in Fiji called the barter system. In the eighteenth century Adam Smith, a Scottish economist, philosopher, and author, argued that markets and economies existed before states. The father of modern economics believed that money was not created by governments but from bartering for goods and services. Anthropologists argued otherwise, saying that exchanges of goods and services occurred between strangers for reciprocity and redistribution. In any case, the pandemic revived this ancient trading system through Barter for Better Fiji, a Facebook page created by Marlene Dutta, a Fijian, in the spirit of giving when money has been tight and employment tough to find. This innovation through the use of technology connected people all over the country and the world, bringing solidarity to the human race in the belief that we are all in this together. This form of trading of goods and services without the use of money has assisted hundreds of people across the nation. For instance, in exchange for goodwill and groceries, six men known as K9E from the western side of Viti Levu, Fiji’s largest island, provide services ranging from indoor work such as maintenance, clearance, painting, moving homes, and light plumbing work to outdoor work such as grass cutting, farm preparation, backyard land cultivation, chicken shed construction, flower bed preparation, cutting, trimming, and pruning of trees, firewood collection, and fishing.

It has not all been hunky dory as far as the bartering goes, as there have been reports of dishonesty and fraudulent services. One of the challenges of dealing with strangers is that there is risk involved. Nevertheless, it has brought to many the assistance they desperately needed. Bartering has even assisted university students who suddenly had to stay home and study remotely. Although there has been a huge economic downturn in Fiji and across the globe, bartering has helped many to survive this pandemic.

One can only hope and pray that we can all bounce back from our situations and improve in 2022. Our new normal is the one in which we need to collectively support each other during a time of crisis, and perhaps bartering is a result of the new normal.

The University of the South Pacific

I am currently a consultant and reside in Fiji. My area of expertise is resource managent policy analysis with interest in reasearching carbon emissions from fishing vessels in the Pacific. I have worked for the Marshall Islands Marine Resources Authority as the International Fisheries Policy Analyst and at the University of the South Pacific as a Research Associate for the Micronesia Center for Sustainable Transport after graduating from the Fellowship Porgram. My role at MCST is to coordinate the 6 Pacific Island Countries, including Marshall Islands, Solomon Islands, Tuvalu, Tonga, Kiribati and Fiji at IMO meetings and am currently working on issues such equity, equitable transition, disproportionate negative impact and impact assessments of measures.

I have recently joined Vision Fiji which distributes reading materials to libraries of schools around Fiji. Vision Fiji (VF) is a registered non-govenrment organisation (NGO) specialises predominantly in the area of resource mobilising for books for schools in Fiji.