Bruno Pegorari, a 2017 Sylff fellow, has been proactively involved in advocating for the rights of Indigenous peoples, including the Guarani Kaiowá in Mato Grosso do Sul, Brazil. He has contributed a brief article providing an overview of the situation that the Guyraroká community of the Guarani Kaiowá faces in Brazil.

In 2019, I was very fortunate to be awarded a Sylff Leadership Initiative (SLI) grant to continue my legal work with members of the Guyraroká community of the Guarani Kaiowá Indigenous people and their allies in Brazil. This SLI project helped me to carry out specific legal actions oriented at strengthening the community engagement with international human rights institutions in the face of Brazilian institutions’ evasive responses to the community’s attempts to recover their traditional territory. As a matter of law, the Brazilian Constitution and international treaties protect the right of Indigenous peoples to their traditional lands, among them the Guarani Kaiowá. However, it is important to highlight that this SLI project touched upon only a fraction of the broader political and legal struggle of the Guarani Kaiowá from Guyraroká. In this short article, I introduce some aspects of the Guyraroká Guarani Kaiowá’s battle for their traditional territory and explain why this struggle is not only representative of similar experiences faced by other Indigenous communities but also central to the resolution of the legal problem concerning all Indigenous peoples in Brazil. 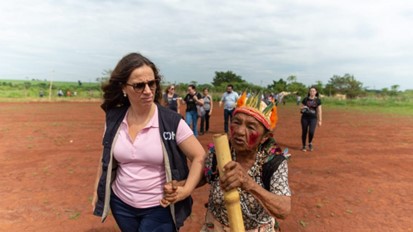 During most of the twentieth century, the Brazilian government incentivized settlers to occupy Indigenous lands in the Midwest. During this period, settlers seized Guyraroká and expelled their inhabitants from the land. For many decades, members were banned from their traditional land, which had been turned into monoculture farmlands aimed at export. This massive land expropriation created severe consequences for the Guarani Kaiowá people. For many, the only alternative to ensure survival was to “integrate” into settler society and detach from their former Indigenous identity and territory or to stay around and work for the settlers running their stolen traditional lands under precarious labor conditions.

In the 1990s, the Guarani Kaiowá initiated a movement to take back their stolen territory. In 1999, community members finally reoccupied Guyraroká and brought the Guarani Kaiowá mode of living back to the land. The movement sought inspiration and legitimacy in the Brazilian Constitution.[2] Although anchored in a solid legal foundation, the take-back movement clashed with the economic interests of settler occupants, who had developed a stable agriculture export economy out of Indigenous lands and labor. As a result, the Brazilian Indigenist Agency (FUNAI) initiated demarcation procedures to resolve the issue. If successfully demarcated, Guyraroká would finally return to the community. However, in the final stages of the demarcation, settler landowners filed a lawsuit against FUNAI, claiming that because community members were not physically occupying Guyraroká at the date the Brazilian constitution was enacted (1988), the Guyraroká community and others under similar circumstances were to be deprived of their right of land restitution. The Supreme Court accepted the settlers’ argument in a biased and controversial decision. It ruled that, in the case of Guyraroká, the right to private property should override Indigenous rights to traditional land. Because of this case’s success, many farm owners across the country started to bring legal claims against ongoing Indigenous land demarcation procedures, producing a cascade effect. This is why the Guyraroká case is so important. It represented a large-scale backlash against Indigenous territorial rights that affected the Guyraroká community and many others all over the country.

Because the highest instance of the Brazilian judiciary had failed to protect the inherent land rights of Indigenous peoples, the Guyraroká community, under the guidance of the Guarani Kaiowá Great Assembly (Aty Guasu) and their allies, decided to appeal to international human rights institutions that have a legal mandate to oversee states under its jurisdiction, including Brazil. This is where this SLI project comes into play. The project helped to advance the international action plan to pursue reparations for the harms committed by the Brazilian judiciary against the community (that is, not protecting their land rights). So far, the Inter-American Commission on Human Rights (Washington, DC) has granted a Precautionary Measure to the community based on the rights enshrined in the American Convention on Human Rights, to which the Brazilian government is a party.[3] Among other things, the commission requested that Brazil take measures to stop surrounding farmers from dumping aerial pesticides over the community.

While the case does not reach the Inter-American Court of Human Rights—the institution that holds the legitimate authority to order final, binding reparations to Brazil—the community and its allies continue to advance their international strategy to expose Brazil’s violation of the fundamental land rights of Guyraroká community members.

[2] The 1988 Brazilian Constitution switched from the paradigm of assimilation to one of protection and respect of Indigenous distinctiveness through the recognition of their rights. Article 231 recognizes Indigenous peoples’ “social organization, customs, languages, creeds and traditions, . . . as well as their original rights to the lands they traditionally occupy.” The same article also established that “The Federal Union has the responsibility to demarcate [their] lands and to protect and ensure respect for all their property.”

[3] A press release on the commission’s decision is vailable here:  https://www.oas.org/en/iachr/media_center/PReleases/2019/244.asp.