Madness Not Allowed: A Review of Spiritual Travelers under Religious Conservatism in Indonesia

Religious activists in Indonesia have taken to social media to harass spiritual travelers who do not belong to the Muslim majority. Jesada Buaban, a 2019–2022 Sylff fellow at Universitas Gadjah Mada, argues that the religious majority sees the spiritual travelers as morally sick persons who need to be cured. Jesada was a Theravada monk in Thailand for 18 years and now researches gender, violence, and religious legitimacy.

Religious diversity in Indonesia is limited because religious organizations must express their nationalism. Minority religions are especially at risk when they are not in line with mainstream organizations like Majelis Ulama Indonesia.[1],[2] The state also forces its population to believe in God and identify as belonging to one (state-recognized) religion.

On a smaller scale, this Islamization paves the way for the rise of religious specialists who play a significant role in each province. Some activists are even popular on social media. These factors affect the lives of spiritual travelers who are seen as mad/insane persons who must be medicalized and convinced to change their behaviors. Ultimately, they become commercial objects of “moral restoration.” 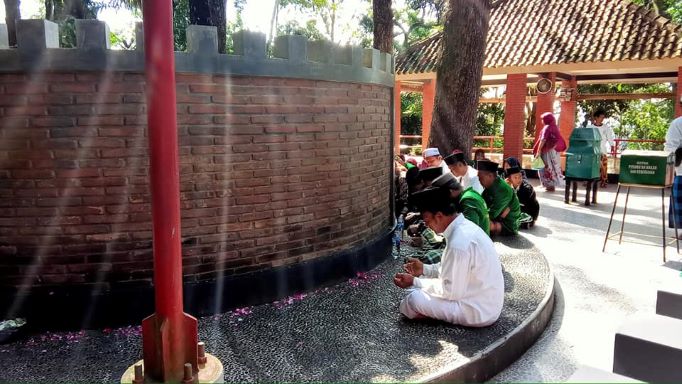 Pilgrimage to the tomb of Muslim saints on Mt. Tidar, Central Java (photo by Jesada 2022)

In the Javanese tradition, visiting the tombs of saints (wali) is viewed as a pilgrimage. Some people also leave household life and become homeless, like an ascetic (petapa). These people tend not to cut their hair and wear old, dirty clothes. But since YouTube and Facebook became popular in Indonesia, such spiritual travelers began to be bothered by groups of social-media activists such as Sinau Hurip and Pratiwi Noviyanthi.

These two groups are non-profit foundations (yayasan). Sinau Hurip (Learning Life from Lives of Other People) has 1.01 million subscribers on YouTube (channel created in 2019). Meanwhile, Pratiwi Noviyanthi (Ripple) is followed by 3.4 million (channel created in 2020). The same names are used on Facebook. Videos are uploaded every day by the foundations’ teams, consisting of 5-10 members. The channels earn income via YouTube and Facebook advertisements.

These two groups look for the homeless or solo-traveling persons, sometimes acting on tips from their Facebook followers. They especially focus on people who travel on foot. Walking is the symbol of those who have no job, which means (in these YouTubers’ opinion) that they have mental problems and do not want to work, associate with friends, marry, or live a household life—all of which are contrary to Islamic practices. If someone wears a necklace or a rosary, they will be asked to remove it because it is considered heretical according to Islamic radicalism.

The YouTubers always begin by asking permission to talk with the spiritual travelers but turn to force if they deny it. Fights erupt in some cases. Even though the YouTubers start the disturbance, their compassion is emphasized—they are the ones who come to “help.”[3] The homeless are usually asked/convinced to cut their long hair, take a bath, wear new clothes (mostly clothes of the YouTubers’ foundations), and receive some food and drink, and then are allowed to leave.[4]

Talkative spiritual travelers seem to be disturbed less compared to the quiet ones: physical compulsion tends to occur less when the YouTubers can engage in a discussion with the traveler, even if they disagree on religious beliefs.[5]

Being non-talkative does not mean that the spiritual traveler must be mad or has a mental illness; they could simply be introverted, for example. But the foundations’ YouTube and Facebook followers seem not to understand the diversity of lifestyles. They perceive the two activist groups as heroes who help correct the distorted behaviors and beliefs of the spiritual travelers. Pratiwi always invokes the name of God, like saying “please go back, this is Allah’s word” when asking the spiritual traveler to stop their journey and return to their homeland.

If a commenter on YouTube or Facebook warns the groups to stop disturbing the spiritual travelers, writing “this person may be a saint (wali),” other followers will reply “there is no correct practice outside Islam. Muhammad is the last prophet and his teaching is complete.” Many commenters also suggest bringing the travelers to Islamic schools (pesantren) on the grounds that they would live as good Muslims.

Interestingly, there are no comments that directly mention human rights. In Indonesia, especially in the religious sphere, rights are not important. And few people consider photographing or recording a video of someone without consent as an ethical issue.

Michael Foucault said that medication is not pure science but a combination of medicine, economics, power, and society.[6] The “medical gaze” means the medical separation of a patient’s body and identity, in which people are dehumanized into an object of analysis based upon medical knowledge.[7]

The imagined “mad” persons in Indonesia are not judged by medical knowledge but by religious conservatism that does not understand nor respect those who are different from the Islamic mainstream.

Received Sylff fellowship in 2019-20.
Academic supervisor: Dr. Zainal Abidin Bagir
Academic achievements, social engagement initiatives:
He completed his Bachelor of Arts in Religious Studies from Mahidol University in 2010 and Master of Arts in Southeast Asian Studies from Walailak University in 2017. Most of his research projects and articles involve with social and religious issues in Thailand such as gender, violence, and religious legitimacy.

He had an opportunity to live a monastic life as a Theravada monk for 18 years. Of course his B.A. and M.A. education had been conducted during that period. Such an experience facilitates him to be familiar with Theravada Buddhism in terms of scriptures, folk beliefs, as well as religion-based problems/solutions, which have been reflected through his academic researches.

Sylff has been facilitating his education processes in terms of education fee and fieldwork conducting.