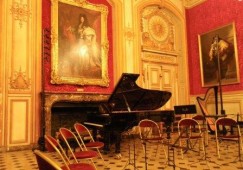 institutions—the Paris Conservatoire, the Juilliard School and the University of Music and Performing Arts Vienna—in their collaborative organization of a Sylff Chamber Music Seminar and Concert since 2006. Selected Sylff fellow musicians from the respective institutions meet at a host institution, and after intensive practice with coaches for a week, they perform at a finale concert. This winter, the event was hosted by the Paris Conservatoire.

The following is a report by Ms. Gretchen Amussen, an administrator of the Sylff Program at the Conservatoire, the host of the Seminar.

From January 24th to February 1st 2010, Paris became the theater for a unique three-country chamber music project involving some 21 musicians… The Paris Conservatoire, the fifth institution to be awarded Sylff status in 1988, was hosting its second Sylff chamber music seminar, thanks to generous support from the Tokyo Foundation. 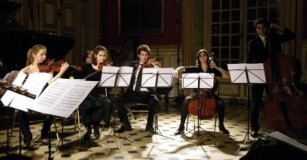 The project had evolved through lengthy conversations between the three arts institutions in the Sylff network, the Juilliard School, the University of Music and Performing Arts Vienna, and the Paris Conservatoire for Music and Dance. Each of the three institutions is renowned world-wide for training musicians at the highest professional level, and our “stock in trade” is performance. Thus, we agreed, the most natural way to engage in a three-way conversation involving musicians would be through chamber music. In this unique blend, each actor has a distinct and essential voice, each must listen to the other, and the end result can only be successful if there is agreement amongst all performers as to the overall artistic vision to be conveyed. The existence of repertoires from different cultures allow us to know each other better whilst also being attentive to the specificities of the musical cultures represent and which we wish to share with our public.

We chose to integrate the Sylff project to a major chamber music project held each year entitled “Quinte et Plus”, or “Five and more” – the idea being that at least five musicians come together to perform, and that within each group at least one professor performs as well.

Wide Range of Participants and Coaches

This year, we had some of the Conservatoire’s most well-known professors sharing center stage with the French, Viennese, and American musicians. Philippe Bernold, flute, had chosen an arrangement of Claude Debussy’s beautiful orchestral work Prélude à l’après-midi d’un faune for 9 instrumentalists ; Claude Delangle, the world-renowned saxophonist, had chosen the Mystic Sextet by the Brazilian Heitor Villa-Lobos; and the cellists Marc Coppey and Diana Ligeti were coaching and performing the version for sextet of Arnold Schoenberg’s Transfigured Night. The performance, scheduled for February 1st, was to be held in the magnificent “Grand Salon” of the Army Museum at the Invalides, whose cathedral is home to Napoleon’s Tomb. Each of the participating professors has wide experience performing throughout the world, and each had responded with enormous enthusiasm to the invitation to perform with musicians from Vienna and Juilliard. The cellist Diana Ligeti, who had previously participated in a Sylff Forum project held in Bochum, spoke all the languages represented by the participants (except for Mandarin and Hebrew!), as she speaks fluent Hungarian, Rumanian, German, English and French…. Although to paraphrase Claude Delangle, we say in music that which we cannot say with words!

Activities and Voices of Participating Fellows

Every day lunch was served at the cafeteria — allowing us to meet and make sure that our guests had everything they needed. The flutist Jessica Han, the oboist Gernot Jöbstl, the harpist Veronika Villányi and Sylff scholars Moran Katz, clarinet, and Sally (Yen) Hsin-Chieh, piano were eager to hear classes in their respective disciplines ; Sylff scholar Emily Daggett Smith, violists Megan Griffin and Paul Rabeck had less free time due to a heavier rehearsal schedule. Most of us joined up to attend a concert at the famed impressionist Orsay Museum on Tuesday night; Thursday we had a joint dinner. And in between there was the tour of Paris, and connections each musician made with fellow students at the Conservatoire — including informal outings. Some had dreamed so long of visiting Versailles or the Louvre that simply being able to do so was heaven. 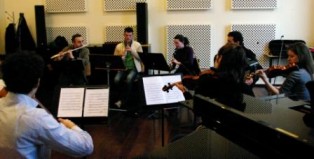 As for the music-making, Jessica Han recounts “Everyone was very friendly during the first rehearsal. Even though there was a language barrier, I was thrilled and relieved to see that everyone, although shy, was curious and interested in getting to know one another. Smiles and jokes were exchanged and laughter was shared. We briefly talked about our respective cities and established relationships as people and as friends before we started to work…
“The rehearsals themselves were as interesting as they were productive. Coming from New York, rehearsals are often intense and pressure filled. In Paris, there was an easiness in the rehearsals that allowed for an easiness in myself as a person and musician. It was eye opening to me to see that this easiness allowed for much of the music to happen on its own. The elements that did not take care of themselves were easily remedied with a bit of extra time and attention.

“When I was not in rehearsal, I had the unique opportunity to visit some classes. As a flutist, I was astounded by the differences in sound and approach to the flute. It was distinctly French to me and reminded me of my Jean-Pierre Rampal recordings. I felt that a huge amount of attention was paid to sound and sound production. Everyone I heard play had a beautiful silvery sound with fantastic clarity that seemed to float and flow effortlessly.”

For the cello coach Diana Ligeti, the theme of the Schoenberg — referring back to the literary text which accompanies the piece — summed up the goal she had set herself for the week: “to go beyond oneself and sublimate difficulties in order to reach perfect harmony. We had with not students, but true artists. Each brought their musicality, their experience, their conception of the work. At times we disagreed, but we always sought to understand each other’s point of view. At the end of the week, we felt we’d known each other for a long time! In a world where discord [often] wreaks havoc, we, musicians are indomitable: concert after concert, we build bridges over and beyond the chasms that separate us.” 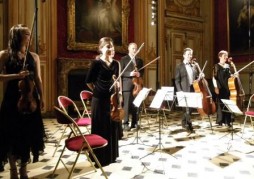 Enthusiastic, fascinating personalities emerged as the week went on: Megan, the violist who’d created an extraordinary outreach project in Tanzania; Moran, the Israeli clarinetist who’d dreamed of coming to study in Paris but had ended up in New York — she already knew the city well and went to concerts every night!; the Hungarian harpist Veronika, who was so happy to meet the harp teachers at the Conservatoire; Gernot, who had already joined the Viennese Radio Orchestra, sought out fellow oboists…

Akiko Matsunobu and Ayako Hoshino from the Tokyo Foundation, Dorothea Riedel and Gregor Widholm from Vienna, Bärli Nugent from Juilliard — all had made the trip to Paris to share in the joy of the final concert. The Grand Salon is an exquisite 17th century room with marble floors and elegant royal portraits — the large windows look out onto the Esplanade leading to the Invalides, a royal way if ever there was one. The hall, seating some 200 guests, was packed — and in fact the organizers had to even turn some away... The quality of the silence once the musicians started playing was remarkable: everyone was absolutely present to the moment that was to be ours. From the mood-setting Debussy to the intense and extraordinary Schoenberg, each performer and each performance was extraordinary. The applause was warm and long, and when all the musicians stood up to bow together, you could feel the joy of the shared music-making, of everyone coming together.

At the reception following the concert, I heard musicians saying “we’ll stay in touch now on Facebook” and 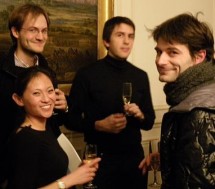 exchanging addresses. Musicians from one country who’d dreamed of studying in one of the partner countries sought out those who could answer their questions, but mostly people were simply happy to savor the moment and the success of the concert. The last word comes from Jessica Han: “How often does anyone, regardless of who you are, perform in a gorgeous private room in a respected museum with huge windows where one can look out over Paris, with crystal chandeliers everywhere, under an original portrait of King Louis XIV? The concert was excellent and the experience, remarkable. I could not have dreamed up a more beautiful conclusion to such an amazing adventure in Paris.”

“Voices from the Sylff Community” is a space showcasing the activities and opinions of Sylff fellows and faculty members. We have received contributions from fellows and faculty members all over the world. We are looking forward to sharing YOUR voices with people around the world, including global issues with local perspective, grassroots issues requiring global attention, and your first-hand experience.
For further details, please click here.