On April 12, 2011, the Howard University Graduate School celebrated 20 years of endowment from the Sasakawa Young Leaders Fellowship Fund (Sylff), donated by The Nippon Foundation and administered by the Tokyo Foundation. SYLFF fellows and alumni, as well as faculty and staff from across the Howard campus, participated in the event.

Anita Nahal, acting director of the International Affairs Program and director of the Sylff program at the Howard University Graduate School, delivered a welcome address, noting the significance of the event and emphasizing the evolution of the program, both internationally at the Tokyo Foundation and locally at Howard University. In this past year, 11 fellowships were awarded, an unusually high number due to the availability of additional funds. Also, over the last nine years, the Sylff program at Howard has held an Annual Sylff Fellows Research Seminar and published an online newsletter, Frontline (www.gs.howard.edu/financial/Sasakawa/news.htm), to increase the visibility of the fellowship on Howard’s campus. The university has awarded 65 Sylff fellowships since the inception of the program in 1991. 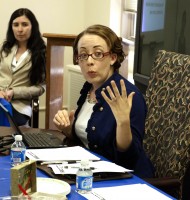 The welcome was followed by remarks from Charles L. Betsey, interim dean of the Howard University Graduate School. Betsey began his remarks by calling for a moment of silence for the victims and survivors of the tsunami tragedy in Japan. His remarks touched upon the importance of leadership in the world. He elaborated on the importance of the Sylff program, especially in a world where leadership is critical in diverse areas. He noted that in 1991, Howard received $1 million to fund student fellowships that would develop global leaders and solve emerging problems around the world.

Betsey stated that the Sylff fellows at Howard come from different departments, including African studies, communication and culture, economics, history, international studies, and sociology and anthropology. He noted that Sylff fellows and alumni are continuing the battle for freedom in many parts of the world, similar to those fought during the civil rights era in the United States. Thus, the Sylff fellowship remains a critical component in finding needed solutions to issues of global concern.

Following Dean Betsey’s remarks, six current Sylff fellows gave presentations, after which there was a short Q & A session. The fellows and their research topics are:

Lonzen Rugira, Department of African Studies and Research “The Cultural Geography of Insecurity in the African Great Lakes Region: Rwanda, Burundi and the Democratic Republic of the Congo”

Chandi Sithole, Department of African Studies and Research “An Evaluation of Development in Zimbabwe (1979-2009) from the Perspective of Peace-building in Post-Conflict Societies”

One common theme that emerged from all the presentations was the identification and positioning of people across the world.

In another component of the day’s program, a special panel of Howard Sylff alumni discussed the topic, “What Is Leadership: Sylff and Us.” The panelists were Nubia Kai Al-Nura Salaam (Sylff fellow, African Studies, 2000-2002), Kari Miller (Sylff fellow, African Studies, 2008-2009), and Ada Vilageliu-Diaz (Sylff fellow, English, 2006-2008). Salaam is a poet, playwright, essayist, and novelist, and is currently an assistant professor in the Department of Theatre Arts at Howard University. Miller is currently assistant director of the Sub-Saharan Africa region for the Council for the International Exchange of Scholars (CIES), which administers the Fulbright Scholars Program for the US State Department’s Bureau of Educational and Cultural Affairs. Diaz is currently working on a novel and a book on Toni Cade Bambara.

Marcia Headley, current Sylff fellow and student editor of Frontline, moderated the panel discussion. Headley noted that the Howard Sylff alumni were responding to four questions, previously distributed to them. The questions revolved around the Sylff program’s emphasis on leadership. The questions were:

1. How have you epitomized leadership in your professional and personal lives? To what extent do the leadership skills that you practice result from your Sylff experience?

2. As a global citizen, which areas of contemporary global concern are you most impassioned about? How do you share your views about those issues in a positive manner with those younger than you in order to create a productive mentorship?

3. The Sylff program in Tokyo has undergone changes over time keeping in tune with changing needs of the Sylff fellows and institutions. What are your recommendations to the Tokyo Foundation on how to enable the Sylff network to infuse more interactive connections/collaborations between Sylff fellows—past, current, and future?

4. What would be your “elevator pitch” for current Sylff fellows? Any words of wisdom?

Headley read the comments of some of the alumni who were not able to be present at the occasion. For example, Ingar Johnson (Sylff fellow, Sociology, 2006-2008) stated, “As a global citizen, I am most impassioned about the contemporary global concern of cultural disconnectedness. As the global landscape changes, so do our ideas and ways of doing things. Whereas change may be good, it may also have unintended consequences. It is very important to understand the interconnectedness of our actions globally. When I speak with younger people, I ask them their concerns and in what ways might their concerns affect people in other parts of the world, as well as how they see themselves working with others to positively change the landscape at home and abroad.” Or for example, Randy Short (Sylff fellow, History, 2005-2006) stated that he tells young people to “Avail (themselves) of every opportunity to advance and learn about other people. And network always, and continually travel.”

Headley then asked the panelists to respond to any one or two of the questions.

In responding to the questions, Miller pointed to the importance of teamwork and team spirit. She noted that as a leader, seeing the strength in every team member is important. She highlighted the need to determine what is ethically and morally right and the courage it takes to do what is right rather than what one is told. She indicated that as a leader, one needs to know when to lead and when to follow, and as no man is an island, an effective leader must live together with others. She credited Sylff for pushing her to do research outside her area of specialization. Lastly, she noted that there are still other opportunities that are available to Sylff fellows and alumni and that the Sylff programs can assist in many ways in locating those opportunities.

Nubia Salaam highlighted such leadership skills as compassion and effective empowerment. In addition, she expressed the importance of traveling overseas and using the experience positively. She indicated a deep concern for the human condition, human desire, and human spirit.

Ada Vilageliu-Diaz noted that her leadership role has been to encourage youths to focus on attaining higher education. She believes that as a woman of Latino heritage with a doctorate, she is a role model for young Latinos who wish to attain higher education. She noted that the Sylff program has helped bring together women of color in shared experiences through research and travel. Fellows also stated that the Sylff celebration was an event that provided them an opportunity to present their understanding of the world through research before a community of peers and faculty and to receive scholarly advice. The evening ended with a small reception.