University of California, San Diego, celebrated its fiftieth anniversary this year, and its School of International Relations and Pacific Studies (IR/PS), a recipient of a Sylff endowment, will soon be marking its twenty-fifth year. To mark these milestones, a "Tribute to Friends" event was held on May 26 at the UCSD Faculty Club to honor three early founding donors for IR/PS, including Sylff.

The event, held on a sunny, balmy day typical of Southern California, attracted some 100 donors, faculty members, and students who have received fellowships, including Program Officers Mari Suzuki and Tomoko Yamada from the Tokyo Foundation. Participating Sylff fellows noted that the fellowship they received at IR/PS was instrumental in enabling them to pursue their studies and has made a valuable contribution to their careers.

Dean Peter Cowhey opened the event with a warm welcome message, which was followed by performances by two student groups.

The first was a pop group calling themselves AggaPOPs, comprising students from Japan, China, and Thailand. They sang songs in English, in addition to their respective native languages. The second group was La Buena Vista del Destino Manifesto, whose members sported stylish Panama hats and performed up-tempo Latin numbers.

The two groups exemplified the international nature of the IR/PS's student body. 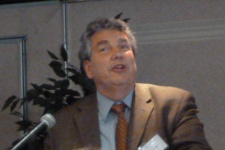 Dean Cowhey noted that IR/PS students were characterized not only by academic excellence but also by their many talents and deep awareness of social issues. For instance, they helped raise 20,000 dollars in donations for the victims of the March 11 earthquake and tsunami in northern Japan.

A video presentation was made of the IR/PS's three early founding donors, recognizing the contributions they made to research into the Asia-Pacific at a time when the region's importance to the global economy and America's international relations was growing.

In the video, Takeo Hoshi, the Pacific Economic Cooperation Professor in international economic relations who has been involved with Sylff since the beginning of the program at IR/PS, noted that the Sylff goal of developing future world leaders matches the IR/PS aim of nurturing future leaders for the Pacific Rim. Sylff was also recognized as enabling IR/PS to attract the best students: One fellow noted that the Sylff focus on leadership and public service was a major factor in her decision to study at IR/PS.

The Tokyo Foundation's Mari Suzuki then offered congratulatory remarks on behalf of President Hideki Kato and also gratefully noted the many warm messages of support, generous donations, and other assistance provided by the United States in the wake of the earthquake and tsunami.

Inasmuch as the Tokyo Foundation is a think tank dedicated to policy research as well as leadership development through programs like Sylff, she touched upon the possibility of closer contact between researchers at IR/PS and the Foundation.

The donor event concluded with a beautiful song full of hope for the future performed by Kay-Marie Moreno, assistant to Dean Cowhey.

Click below for: Information on IR/PS Sylff fellows More photos of the donor event