Christina Davis, associate professor of politics and international affairs at the Woodrow Wilson School of Public and International Affairs, Princeton University, and a member of Princeton's Sylff steering committee, visited the Tokyo Foundation on July 5, 2011.

Davis is a specialist in trade policy and is investigating the historical process by which countries become members of international trade organizations. Her current focus is Japan's accession to the General Agreement on Tariffs and Trade in 1955 and China's joining the World Trade Organization in 2001. On her visit to the Tokyo Foundation, she exchanged views on trade policy with several Tokyo Foundation research fellows.

On the question of Japan's possible membership in the TPP, Davis noted she was struck on her visits to Japanese bookstores by the large number of titles portraying the free-trade agreement in a negative light and warning that it would drive the country to ruin. It seemed odd, she thought, that there should be such strong opposition toward the agreement when Japan has yet to enter into negotiations or before the substance of the agreement has been made clear.

Perhaps there is a lack of understanding about the pact's positive sides, such as the contributions it could make to achieving fairer and freer trade, Davis noted. While resistance from the farm sector was to be expected, discussions of the issues from a broad perspective appeared to be lacking. Even in the United States, domestic industries invariably resisted the attempts Washington made to advance a free-trade agenda, but by ensuring safeguards and at times subsidies, the government has been able to persuade affected industries to go along.

When countries enter into a trade agreement, they not infrequently have doubts as to whether their partners will actually comply with international trade laws, she said. If suspicions are high on both sides, there is likely to be opposition to concluding the agreement, even when the benefits of liberalized trade are apparent. Davis claimed that dispute-settlement mechanisms are one way of overcoming such opposition. With such mechanisms in place, governments can persuade domestic interest groups and legislators that the benefits of opening up the market can be ensured by filing claims against measures perceived as being protectionist. Dispute settlement is thus an effective way of striking a balance between the demands of international relations and domestic politics. 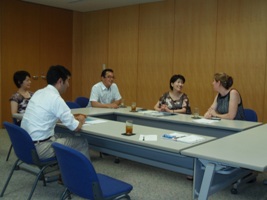 Japan has benefitted greatly from free trade, Davis added, enabling it to become an economic superpower, and so it is somewhat disappointing that the merits of free trade are not more fully appreciated in this country. Many Japanese countries have prospered through the R&D efforts of leading-edge technologies. This is a strength that should continue to drive economic growth, even if liberalization makes those technologies more readily available to companies in other countries.

The placing of restrictions on Chinese exports of rare earths was an ill-advised move from the viewpoint of international trade, she feels, for they did nothing to benefit China. Using dispute-settlement procedures will be important in responding to differences in values and commercial norms in trade with China.