During this summer, Sylff fellows from various countries visited the Tokyo Foundation to meet with the Foundation’s research fellows and program officers.

Noah Smith, a PhD candidate in economics from the University of Michigan in the United States, came to Japan to undertake research on the mechanism of the bubble economy. He spoke with Katsuhito Iwai, Tokyo Foundation Senior Fellow and Professor Emeritus of the Tokyo University, to learn the renowned economist’s views of the bubble economy and nature of capitalism. Noah also had a chance to meet Sota Kato, a Tokyo Foundation Senior Fellow who was formerly a lecturer at the University of Michigan’s Department of Political Science. 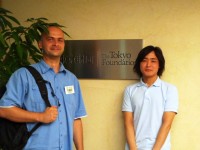 Yusuke lived in Dalian, China, between the ages of six and eight, as his father—a high school Japanese language instructor—was dispatched there from 1989 to 1991 as part of a bilateral exchange program. He has been involved in developing Japanese language textbooks for Chinese and Korean students and taught Japanese at Fudan University in Shanghai from 2009 to 2011. Yusuke and Roman spoke with Yoko Kaburagi and Mari Suzuki—program officers for both the Sylff and NF-JLEP programs—about the future of Japanese language education in Asia and Europe and what can be done to promote it worldwide.