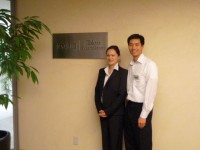 Kurtis Nakamura and Judith Li of the University of California, San Diego, were in Japan for an internship. They had just finished their first year of a master’s program at the School of International Relations and Pacific Studies. Kurtis was interning at the United Nations University in Yokohama, while Judith worked for Deutsche Bank AG in central Tokyo. They spoke with members of the Tokyo Foundation’s Leadership Development team on Japanese business manners and the roles and benefits of an internship for their careers.

Lars Gaupset of the University of Oslo in Norway was in Japan to attend a conference and memorial ceremonies for the Hiroshima and Nagasaki atomic bombings. Having just received an MA in peace and conflict studies from the university, Lars was heading a delegation from “No to Nuclear Weapons (NTA),” a Norwegian nongovernmental organization founded in 1981 that works for the disarmament and nonproliferation of nuclear weapons. He was joined on the trip by two NTA members: Grethe Nielsen, a longstanding member in her seventies, and Bitte Vadtvedt, a journalist and documentary filmmaker. 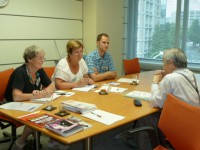 At the Tokyo Foundation, they met with Senior Fellow Akio Kawato, former Japanese ambassador to Uzbekistan and Tajikistan, who provided a historical overview of Japanese policy on nuclear weapons and nuclear energy. They were also given updates on the Fukushima nuclear accident and exchanged opinions on Japan’s future energy policy and the feasibility of renewable energy.