Millions of low-income families in developing countries do not have adequate access to energy, such as electricity, and they must rely on biomass fuels (like wood) to meet their household energy needs.

An estimated 90% of rural people in developing countries rely on biomass fuels as the primary or exclusive source of household energy. Moreover, access to these resources is more difficult in the cities because urban residents, unlike their rural counterparts, cannot hand-collect fuel, and they are too poor to purchase it.

A Community Energy Center in Tanzania

Recent studies completed by the Tanzanian NGO Women Development for Science and Technology (WODSTA; see http://www.wodsta.org) and University College of London have shown that poor households in Northern Tanzania spend on average between 20% and 30% of their household budget on biomass fuels (any fuel that comes from biodegradable matter, such as firewood, charcoal, agricultural products, or kerosene) for cooking and lighting - a share significantly higher than comparable high-income households (DPU/CDTI, 2003/04). Although clean and efficient energy sources are available to save money and time while meeting daily energy needs (such as biogas or solar appliances), poor households in the district lack the income needed to access them.

Four Sylff fellows (one each from Kenya and Italy, and two from the United States) joined people from WODSTA in analyzing this problem and developing possible solutions. With funding from the Tokyo Foundation's Joint Initiative Program (JIP), we implemented a community energy initiatives project to address the problem of inadequate access to energy faced by one poor urban population in some wards in Sombetini-Sokoni One, just south of Arusha, in northern Tanzania, East Africa.

The project was designed by the JIP team and WODSTA in order to provide women with energy alternatives in order to help lower spending for household fuel, to improve family health, and to reduce environmental degradation. Primary to the success of the project was the installation of a Community Energy Resources Center (hereinafter "Center") in Sombetini-Sokoni One. The Center is located near a cluster of dukas (shops) on the main dirt road, a place where most villagers pass daily. 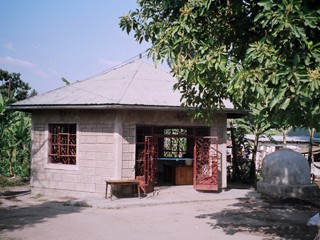 The Community Energy Resource Center in Sombetini-Sokoni One.

WODSTA conducted day-to-day project activities at the Center, while the Sylff fellows offered technical support, such as training, helping in assessments, conducting analyses, and conducting monitoring visits of the Center's progress.

Our project is noteworthy because many of the ideas came from the community members themselves. The Center provides a space that residents can visit and where they can watch demonstrations, attend workshops and training programs, and access literature on alternative sources of energy. Among the technologies being promoted are passive solar food dryers and cookers, plant-oil candles and lamps, fuel-less insulated cooking baskets, energy-efficient stoves, and biogas.

Our team focused on mobilizing women and girls, primarily because in a family the females are generally responsible for many of the household activities, such as housekeeping and cooking, that use energy. The project activities centered on educating, involving, empowering, and building capabilities among females, including local leaders, students, and residents. We wanted to increase the confidence of these poor, often underprivileged women, while providing them access to and knowledge about a wide range of energy alternatives.

Local Volunteers: The Heart of the Center

During the project's first quarter (April-June 2007), WODSTA conducted a baseline survey, a local volunteer energy committee was elected, and the Community Energy Resource Center was officially opened. The second and third quarters (July-December 2007) saw extensive training coupled with hands-on practice in technology construction by the energy committee (which also serves as the Center's managing board). Each female committee member gained experience and confidence and now serves as an in-house expert regarding one type of energy-saving appliance or alternative fuel. 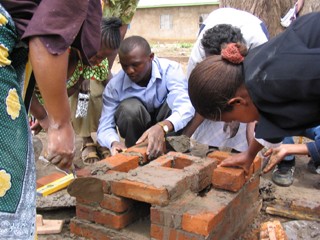 The project emphasized outreach to the larger community and building a larger knowledge base concerning the use and availability of appropriate technologies. The outreach included conducting two market studies and extensive student interaction in the community. During the third quarter (October-December 2007), we focused on training the local people in business skills and on ensuring that the Center's sale of appliances and fuels generated a profit, thus enabling the Center to sustain itself beyond the project-funding period.

In the fourth quarter (January-March 2008), we focused on other business-related skills needed by the energy committee to sustain the Center after the JIP project will have ended. The energy committee has gained significant experience, even authoring a constitution for the Center, registering the Center with Tanzania's Office of the Registrar General, and opening a bank account in which the Center's funds are kept.

We subsequently conducted follow-up surveys to determine how attitudes and outcomes had changed since the baseline survey conducted at the beginning of the JIP project. The answers to the questions that were aimed at measuring community awareness of energy alternatives show that during the project implementation period the percentage of community members who were aware of the Center's activities and energy-saving technologies increased substantially. The share of households having awareness of energy-saving technologies rose from 11% at the beginning of the project to 68% at the project's mid-point and 98% by the end of the project year.

MARKET STUDY, SEPTEMBER 2007: During the project's second quarter, we conducted a market study to determine local people's willingness to purchase different technologies at specified prices. The survey helped the Center's leaders determine which technologies and fuels to focus on based on profit margins and demand. The market study also covered existing shops that sold various types of fuels and stoves. With this information, the Center's leaders determined the best locations for advertising and technology-sales activities and sought commitments from owners of specific shops to promote the Center's products.

The study revealed that 41% of the households indicated they were ready to purchase a technology or fuel at the price presented, and 74% of the respondents indicated that they wished to learn more about how the technologies and fuels worked and that they would visit the Center to learn more, while 39% of the respondents saw the technologies as being too expensive compared to traditional fuels.

The average saving per day when using an energy-saving stove was equal to US$0.25 (a significant amount in a country where the average person lives on US$2.00 per day). As Figure 1 shows, the percent reduction in household money spent on fuel by the families studied was between 21% and 47%, depending on the type of food cooked.

Results of the Project

This JIP-sponsored project successfully implemented the Community Energy Resources Center that is still providing energy alternatives to poor urban women and their families. At the end of the project year (April 2008), our JIP team met or exceeded 90% of the project's initial goals. This work has improved our understanding of the barriers that face poor urban families in accessing clean, efficient, and affordable sources of energy. However, we found that two of the project's aims - increasing the percentage of women involved in energy-related decision making, and creating a more-equitable balance in the division of domestic workloads - were difficult to measure quantitatively.

These two aims relate to a sensitive social issue that relates to the cultural and social lifestyle in Tanzania. Although the women we spoke with preferred a greater balance between the genders as regards decision making and domestic roles, these types of social changes might take much longer than one year to achieve. Lacking data, we found that one local mama (woman) did the best job of evaluating the project in relation to the nature of social change within Tanzania's cultural norms:

At the end, the project provided a concrete solution to the problem of energy accessibility in poor urban neighborhoods. It created a place where people can purchase and construct affordable, clean, and efficient technologies. It directly improves both the health of the women who are responsible for cooking and the local and regional environments. The localization of clean-technology production brings a huge benefit to northern Tanzania, because it reduces the cost of technology production and provides accessible energy alternatives to even the poorest households. 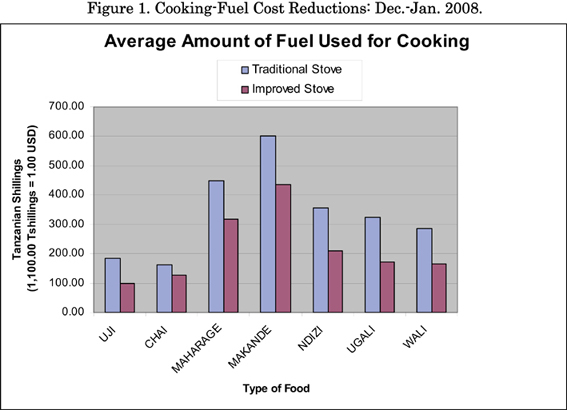 Sylff Fellow
Stuart Graham is the Kauffman Foundation Fellow in Law and Social Science at the University of California, Berkeley School of Law, and is an assistant professor of strategic management in the College of Management, Georgia Institute of Technology.

Sylff JIP project member
Anna Oursler is a student in the Department of Environmental and Urban Planning at the University of California, Berkeley, currently working with Women Development for Science and Technology (WODSTA) in Arusha, Tanzania, East Africa

“Voices from the Sylff Community” is a space showcasing the activities and opinions of Sylff fellows and faculty members. We have received contributions from fellows and faculty members all over the world. We are looking forward to sharing YOUR voices with people around the world, including global issues with local perspective, grassroots issues requiring global attention, and your first-hand experience.
For further details, please click here