A Prescription for Halting Deflation

Koichi Hamada, the Tuntex Professor Emeritus of Economics at Yale University and the mastermind behind Prime Minister Shinzo Abe’s policy for economic revitalization—dubbed “Abenomics”—visited the Tokyo Foundation recently to share his thoughts with research fellows.

Hamada has been at the center of Japanese media attention for strongly endorsing Abe’s antideflation strategy. The professor’s remarks were widely quoted by the Liberal Democratic Party leader during the campaign for the December 16, 2012, House of Representatives election, which the LDP won by a landslide.

Hamada’s remarks significantly boosted the LDP’s standing among the public, many of whom are struggling to make ends meet. He advocates a bold quantitative easing policy to halt deflation and reverse the steep appreciation of the yen. Following the election victory, Hamada was appointed by the prime minister to serve as a special advisor to the cabinet. 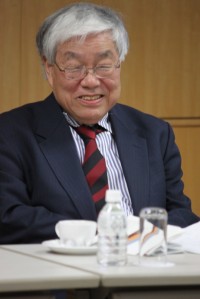 Professor Hamada was a key Sylff steering committee member when the Sylff program was established at Yale in 1989, playing an instrumental role in building the program at the university during the crucial early period.

Joined by Tokyo Foundation Senior Fellows Shigeki Morinobu and Yutaka Harada—experts on the economy and fiscal policy—and other Foundation research fellows at an informal Tokyo Foundation meeting on December 14, Koichi Hamada asserted it was high time for the Bank of Japan to overturn its cautious monetary policy. “Real or structural problems in the Japanese economy, like higher oil prices that have little to do with the currency system, can’t be addressed with monetary policy,” Hamada noted. “However, since deflation and the yen’s steep appreciation are issues related to the domestic and foreign value of money, they should be dealt with policies that directly address currency values.”

Hamada believes, though, that Japan’s monetary authorities have been trying to treat the symptoms with the wrong medicine for the past 15 years. “It’s like trying to cure a stomach ailment with drugs for a heart condition.”

The Bank of Japan contends that its zero-interest-rate policy already furnishes enough funds to the market and that any additional quantitative easing will not lead to increased lending. “All you have to do is look at the Federal Reserve’s purchases of mortgage-backed securities in the United States to realize that such arguments don’t hold water,” Hamada contended. “In Japan, the BOJ can easily purchase CPs, EFTs, REITs, and foreign currency denominated bonds.”

Just as expectations of deflation can in itself have a negative impact on the national psyche, “the belief that deflation is going to be overcome will have a positive effect,” he added. Indeed, the yen has depreciated by more than 10% since November, hitting a two-and-a-half-year low of around 91 per dollar in late January.

“Monetary policy is something that must be applied when the market needs it most,” Hamada emphasized. “It’s common knowledge in economics that monetary policy is more effective than fiscal policy under flexible rates. A bill was passed last year to raise Japan’s consumption tax to 8% by April 2014 and to 10% by October 2015. “Raising taxes first and then relaxing monetary policy is precisely what you shouldn’t do,” Hamada warned. “You need a recovery from deflation first, and then you can use a tax hike to control it, if necessary. And the consumption tax should be the last thing you raise. A much better idea would be an environment tax,” he said, which could encourage innovations in eco-friendly technologies.

Is the Yen Really Too Strong?

While admitting that deflation can be mitigated with monetary tools, Tokyo Foundation Senior Fellow and Chuo University Law School Professor Shigeki Morinobu cautioned that real-world trends must also be taken into consideration, such as the end of the Cold War that opened the floodgates to cheaper labor in Eastern Europe and demographic changes toward an aging society in Japan. “Inflation targeting can be effective,” he said, “but there remains the question of whether it can be stopped once the target is reached, say, at around 2 percent.” He also pointed to the negative consequences of having to make higher interest payments for one’s debt once inflation kicks in.

Morinobu also questioned the common assumption that the yen is too strong against the dollar. “In terms of purchasing power, comparing the prices of fast food in Japan and the United States, for instance,” he said, “I don’t think 80 yen is intolerably high. In fact, companies claiming the yen is too strong might simply be trying to cover up for the shortcomings in their own projections.”

Senior Fellow and Waseda University Professor Yutaka Harada took issue with this view, pointing out that just before the global financial crisis of the late 2000s, the yen was trading at around 120 yen per dollar. “When it steadily climbed to around 80 yen,” Harada said, “many Japanese businesses were forced to lay workers off or halt production of items that no longer paid at that exchange rate. Curtailing production,” he emphasized, “means fewer jobs.” Many companies have been able to survive as a result of these adjustments, but the ranks of the unemployed have swelled, and promising R&D projects have been abandoned. “Many of these technologies were picked up by companies in South Korea and elsewhere,” Harada noted, further compounding the woes of Japanese manufacturers.

The general lowering of income levels from higher unemployment and sluggish corporate profits, Harada commented, has been affecting demand in the nonexport sectors of the economy as well, exacerbating deflation. “There’s no denying that the exchange rate has presented a serious challenge to many Japanese companies,” Harada added.

Because the yen’s value is the rate vis-à-vis the US dollar, it is bound to rise if the United States expands the amount of money in the economy through quantitative easing while Japan does nothing. “The Fed doubled the money supply with QE1 and tripled it with QE2,” Harada said, as a means of overcoming the financial crisis. The money supply in Japan, which was not as severely affected by the crisis, has expanded by only around 30%. “That’s not nearly enough,” Harada asserted. “If Japan had at least doubled its money supply, the yen wouldn’t have shot up as high, and jobs wouldn’t have been lost.”

Working at a Disadvantage

Economists have pointed to the fact that while Japan’s per capita gross domestic product is nearly identical with that of South Korea in purchasing power terms, it is twice the South Korean figure when calculated using exchange rates, suggesting that the yen is disproportionately strong against the won.

South Korea has been known to intervene directly in the currency market to adjust the exchange rate, “But the BOJ can do the same if it wanted to,” asserted Hamada. “It’s been overly timid, thinking that if it aimed for the green it would overshoot it, so it’s been using a putter to get itself out of a bunker for the past fifteen years. Many excellent studies have shown the extent to which Japanese companies have been placed at a disadvantage by this policy,” the Yale professor said, “but such studies have categorically been ignored by the central bank and the major media in Japan.”

The issue of Japan’s huge public debt cannot be overlooked, however, and the Abe administration has announced a fiscal stimulus package that is likely to exacerbate that debt. “Under the circumstances, there’s really no choice but to opt for reflation and somehow get the economy to a state close to full employment,” Hamada said. “Only then can we gauge how bad Japan’s fiscal condition really is. Any hike in the consumption can wait until then.”

Morinobu, though, pointed to the potential risks of higher interest rates on the real economy. “Higher interest will mean that the value of government bonds held by Japanese financial institutions will depreciate,” he claimed. “A 1 percent rise in interest rates will mean a decline of 10 trillion yen in the book value of these bonds. Such a drop will surely affect the capital adequacy ratio, and could lead to a credit squeeze.”

Harada offered the reminder that this has been the argument given by the Bank of Japan for not adopting a quantitative easing policy. “Bonds aren’t the only assets financial institutions own,” Harada said. “They also have loans, equities, and real estate. The bigger banks also have overseas assets, so a cheaper yen will boost those values. If quantitative easing can produce a lower yen, higher nominal GDP, more jobs, and increased tax revenues, there’s no good reason not to take this step.”

“The points we discussed today have been pondered at great length by economists over the past 250 years,” Hamada said in closing, “but our arguments have often gone unheard, even by central bankers. So in that sense, the attention given me by Mr. Shinzo Abe has been a source of great joy for me. At the same time,” he said, “I’m humbled by the fact that it takes politicians to get our message across to the media and the general public.”