Harpsichordist Nominated for a Grammy!

Jory Vinikour, a Sylff fellow in 1991 at the Paris Conservatoire, has been nominated for a Grammy Award in the category of Best Classical Instrumental Solo. Our warmest congratulations to Jory!

Born in Chicago, Jory received first prize in international competitions in Warsaw (1993) and Prague (1994) and is recognized as one of the outstanding harpsichordists of his generation. 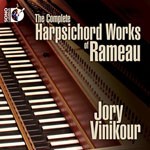 The Complete Harpsichord Works of Rameau

He appears regularly as a harpsichordist at the Paris Opera, Netherlands Opera, Salzburg Festival, Teatro Real de Madrid, and Glyndebourne, and is an active exponent of contemporary repertoire for the harpsichord, giving premiers of works by contemporary composers. He is also active as a conductor.

The nomination for the 55th Annual Grammy Awards is for The Complete Harpsichord Works of Rameau, released by Sono Luminus in June 2012. The recording has received rave reviews from newspapers and magazines around the world for not only its “technical accomplishment” but also the “genuinely moving” and “energetic, eloquent playing” style that provides “countless insights into the artistry of Jean-Philippe Rameau.”