The twentieth anniversary of the Sylff program at the American University in Cairo (AUC) was celebrated on November 6, 2012. AUC became the forty-fifth member of the Sylff community in December 1992. 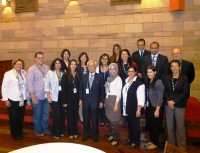 Provost Emeritus Tim Sullivan, who was deeply involved in the AUC’s Sylff program for many years, opened the ceremony. In her welcoming speech, President Lisa Anderson commented that the Sylff program was not only the oldest scholarship program at AUC but also a pioneering one, with its focus on leadership skills and civil engagement as well as academic performance.

Nippon Foundation Chairman Yohei Sasakawa delivered a video message, and Tokyo Foundation President Masahiro Akiyama noted that the qualities a Sylff leader was expected to have were a proactive mindset and the ability to view issues from a broad, interdisciplinary perspective.

The ceremony to celebrate the 20-year milestone was attended by both current and graduated fellows, enabling networking among those from different generations. The participants, who gave a brief introduction of their current activities, have become leaders in such diverse fields as academia, government, international organizations, and filmmaking. All of them, though, shared a clear vision and motivation for social betterment.

The day was packed with interesting programs. Ambassador Magda Shahin, professor and director of the American Studies and Research Center, delivered a speech as a guest speaker on the new government dilemma of drafting a new constitution and the signing of a loan agreement with the IMF.

In the afternoon, a panel discussion was held with four Sylff fellows and a research fellow from the Tokyo Foundation, moderated by Dr. Sullivan. The discussion was titled, “The Prospects for Democracy in Egypt: Where Are We Heading?” The first Sylff panelists to speak was Tahia Abdel Nasser, assistant professor of English and Comparative Literature at AUC, who outlined the role of poetry in the revolution and expressed concern about threats to the freedom of personal and cultural expression in the current political flux.

The second panelist was Brian Wright, a specialist in Islamic law in the Department of Arab and Islamic Studies, who explained the influence of Salafism in the current Egyptian administration.

Adham Abdel Al, a current fellow who holds a position in the Egyptian Commercial Service under the Ministry of Industry and International Trade, talked of the importance of the informal economy, which has been neglected despite accounting for up to half of the national economy. The government should provide such incentives as public financing, he said, to fully develop all sectors of the economy.

Nahla Zeitoun, a program officer at the UNDP in Egypt, shared her views on the pressing need to enhance education for youths, who account for more than half of the Egyptian population, so that democracy can take root in the country.

Ippeita Nishida, a research fellow at the Tokyo Foundation, shared Japan’s experience with democracy and provided comments on the presentations by the Sylff fellows. This was the first time that a policy research member of the Foundation took part in a Sylff forum. He noted that the transition to democracy will take time and incur many costs, and added his hope that Sylff fellows would provide capable leadership for the country.