Music and Hope for Tohoku: My Week with the Michinoku Wind Orchestra

Uniting Tohoku with the World: The Sylff Chamber Ensemble and the “Power of Music”

There's no temple as great as Matsushima's Suigan Temple.
In front of it is the sea, and behind it a mountain called Komatsubara.
In Ishinomaki is the famous Mount Hiyori.

Asked about the value of the arts, it can be hard to come up with an immediate or concrete answer. We cite studies that show that students engaged in art demonstrate improved linguistic or math skills or that it improves creativity, but these points only define the value of art as it influences other fields. Is there a value to art other than more commercial success in the future?

I think most people would say “yes,” but perhaps the difficulty of verbalizing art’s intrinsic benefits stems from its tendency to speak to the intangible or nonverbal elements of the human experience. The arts offer us a means of expression beyond words, and they can allow us to share ideas that transcend the limits of linguistic communication. As a composer and scholar, I am personally fascinated by the potential of art to communicate and explore these elements of life and humanity, and from 2011-2012 I received a Sylff (Sasakawa Young Leader's Fellowship Fund) Fellowship—a program administered by the Tokyo Foundation—in order to pursue my research in cross-cultural communication through music.

Music is uniquely situated as one of the most fundamentally abstract of the arts. There is no reason that a series of vibrations in the air at different rates and magnitudes should hold any meaning. Yet, humans have used music throughout recorded history to convey ideas for which words were insufficient, from the earliest songs praising our heroes and deities to symphonies glorifying individual triumph and Japanese folk songs expressing the beauty of a local area and the pride of the people.

It is no wonder, then, that Steven Verhelst’s “Song for Japan” has become so popular as a means for people all over the world to express their condolences to the victims of the Tohoku earthquake. This piece allows musicians a chance to share their overwhelming emotions where the words, “I’m so sorry for your loss,” seem to fall short. The piece expresses the sadness of loss and hope for the future that those of us living abroad wished to share with the people of Japan.

“Together in Tohoku” Project

Similarly, when I saw a notification in the Sylff Newsletter about the “Together in Tohoku” program, a series of music workshops for students who were victims of the disaster, I e-mailed the Tokyo Foundation to see if there was any way that I could be of assistance. The program involved outstanding young musicians from three Sylff music schools spending a week in Japan, coaching students in Miyagi (aged 12 to 18) and joining them onstage in Tokyo's Suntory Hall as the Michinoku Wind Orchestra. I was thrilled when I heard that I could lend my skills to these events as an amateur interpreter, helping in the communication between the students and the Sylff Chamber Ensemble. 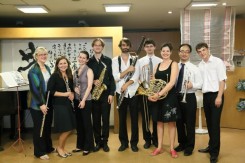 The musicians in this Sylff Chamber Ensemble included Merideth Hite (oboe), Moran Katz (clarinet), and Dean Bärli Nugent (flute) from the Julliard School in New York; Carl-Emmanuel Fisbach (saxophone), Dylan Corlay (bassoon), and Marie Collemare (horn) from the Conservatoire de Paris; and Panju Kim (trumpet), Dietmar Nigsch (trombone), and David Panzel (percussion) from the University of Music and Performing Arts in Vienna. Perhaps the tangible benefits of the Sylff Chamber Ensemble's visit might seem insignificant compared to the needs of people who lost friends and family members or all of their material possessions, but this international musical collaboration will hopefully provide lessons, models, and memories that will support these students as they continue into adulthood.

How Do You Get to Suntory Hall? Practice!

Before the concert at Suntory Hall, the Sylff fellows worked closely with some 130 students from schools all over Miyagi Prefecture, offering private and group lessons and rehearsing together with them at the Izumi campus of Tohoku High School. For many students, these lessons were the first private instruction that they had ever received and were a unique opportunity for them to engage directly with masters of their instruments. These workshops ran from 9:30 am to 4 pm (with only a short break for lunch) for three consecutive days from August 13 to 15. These students, despite the demands of this rigorous schedule, their commute, and oppressive heat rose to the occasion through the kindness and support of the Sylff Fellows and Japanese faculty.

As with any international exchange, there were cultural and linguistic miscommunications, but they were easily navigated as everyone shared the same fundamental goal of providing these students with the best possible experience. The Sylff Chamber Ensemble’s clear dedication to the students quickly broke down the barriers of language and shyness. Several of the fellows too, commented on how impressed they were by the students' efforts and willingness to perfect their performance.

By Wednesday, August 15, many of the students seemed genuinely heartbroken that their grueling rehearsal schedule had already come to an end, and I was inundated with students asking how to say, “I will never forget you” in English.

On Thursday, the Sylff Chamber Ensemble traveled to the coastal city of Ishinomaki to perform a mini-concert at a community salon. Ishinomaki has one of the most tragic stories of last year’s tsunami, with thousands of lives lost and several entire neighborhoods leveled. Now, a year and a half after the disaster, the town is rebuilding slowly but surely.

Thursday afternoon’s mini-concert was an intimate affair, attended by between 50 and 70 local residents, many of whom were senior members of the Ishinomaki community, and the Sylff Chamber Ensemble’s performance of “Song for Japan” drew tears from many members of the crowd.

Before their performance, the Sylff fellows visited Sarukoya, a musical instrument shop in downtown Ishinomaki. Teruo Inoue, the owner, didn't have enough time to close the shutters before he fled on the day of the earthquake, and all 30 pianos on display were submerged in the tsunami. Inoue decided to keep the pianos, though, and works to restore them to concert-ready condition. 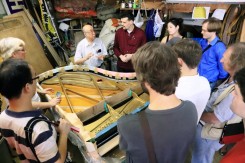 Through a variety of ingenious techniques, he has already finished repairing one grand piano, which now travels across Japan for professional performances. The piano has become so popular that there were several bouquets of flowers in the store sent by various patrons. Inoue is currently restoring a second piano for a new middle school being built in Ishinomaki. He admitted that it would actually be much cheaper to buy a new piano than to repair those that were damaged, but he is working to restore them as symbols of renewal in ways that will be meaningful to the community.

On Friday, the Sylff Chamber Ensemble joined the rest of the Michinoku Wind Orchestra in Tokyo for the concert that was the culmination of the week’s program. The audience consisted of over 1,300 people, many of whom had assisted with the success of this project by donating instruments to replace those that were lost in the tsunami or working behind the scenes for the international exchange. This crowd made the concert a tremendously meaningful event not just for the performers but for everyone in attendance. 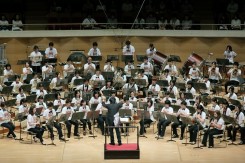 One significant aspect of this concert was the integration of the Sylff fellows into the Michinoku Wind Orchestra, creating an ensemble of Miyagi students and young musicians from the world’s top conservatories. One of music’s most powerful aspects lies in its potential for bringing individuals together in collaborative and unified expression, with groups ranging from duos to hundred-person orchestras. In the case of the Tohoku project, the combination of students from different schools with members of the international musical community clearly demonstrated the ongoing international support for those affected by the tsunami.
The concert at Suntory Hall on August 17 contained many significant and meaningful works, including “Song for Japan” and Philip Sparke’s “The Sun Will Rise Again,” from which all royalties are donated to the Japanese Red Cross. Personally, I was especially interested in the piece “Elegy for Tohoku” by Dutch composer Alexander Comitas. In composing this work, Comitas took folk songs from three of the prefectures worst hit by the tsunami, arranging the melodies of Iwate’s “Nanbu Ushi Oi Uta” (Nanbu Cow-Herding Song), Fukushima’s “Aizubandaisan” (Mount Aizubandai), and Miyagi’s “Tairyo Utaikomi” (Fisherman’s Song) into a requiem for the people of Tohoku.

One of the other wonderful things about great art is that it lends itself to multiple interpretations. Heard from a Western musical perspective, these folk melodies have a decidedly “minor” flavor, and this feel, combined with their relaxed tempo, could lead one to hear these songs as a dirge. Perhaps this is what Comitas intended in his recomposition of these melodies. Knowing these songs, though, and their original lyrics of local pride and seeing the Sylff Chamber Ensemble onstage with the children of Miyagi Prefecture, I heard the “Elegy for Tohoku” as a triumphant declaration of local pride, joined together with the voices of people from all over the world.

Hope for the Future

For me, sitting in the audience, one of the most moving things about the concert—and one of the most important lessons—was that, through their efforts in practicing and rehearsing, these students shared the stage with master performers as equals. Working together and performing in solidarity with top performers from around the globe, it is my wish that the students feel the rewards of their own hard work and realize that, regardless of the past, the efforts that they and their communities are making now will build their future.

I hope that this week of rehearsals and the concert at Suntory Hall were an experience that the students will look back on and remember fondly; I hope that the Sylff Chamber Ensemble was able to express their grief and support to the students; and I hope that, as an artistic project, even if they did not understand every aspect of the experience, the students felt the meaningfulness of the week’s events.

I would deem this project a success if any one of these hopes was met, and, from my observation of the joy on the students and Sylff fellows' faces at the party after the concert, I believe that “Together in Tohoku” succeeded in all of these dimensions.

Bravo to all, on the stage and off, who worked together to make this concert a success.

Past Program: Together in Tohoku(2012)
Simon Hutchinson is a composer whose work spans several musical styles and cultures. Raised in Boston, Hutchinson developed an appreciation of cross-cultural interchange and communication through his travels around the world, including five years in Iwate, Japan. His unique compositions explore themes of nature, humanity, and global community. He holds a BA in music from Bates College, an MA in music composition from the University of California, Santa Cruz, and is a PhD candidate in composition at the University of Oregon, where he received a Sylff fellowship in 2011–12. He volunteered to act as an interpreter and coordinator for the Tohoku workshops and Suntory Hall concert, saying “I am greatly indebted to the people of Tohoku for their kindness and support over the years, and I would like to assist in any way that I can.” http://simonhutchinson.com/