Sylff@Tokyo: Visitors from Germany and Poland 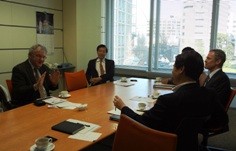 Professor Uwe Vollmer of the Institute for Theoretical Economics at the University of Leipzig visited the Tokyo Foundation on February 9, 2012. He spoke with the Foundation’s senior fellow Christopher J LaFleur, an expert on government policy and international relations, and several Leadership Development program officers.

Professor Vollmer, who is currently a member of the university’s Sylff steering committee, specializes in microeconomics and addresses research issues in the theory of financial intermediation, European monetary policy, Japanese monetary policy, and the theory of monetary institutions. One of his recent articles is “The Financial Crisis in Japan: Causes and Policy Reactions by the Bank of Japan” (co-authored with Ralf Bebenroth), European Journal of Comparative Economics.

Professor Vollmer is a close observer of the Japanese economy and visits Japan regularly to give lectures at universities. On his most recent visit, he was frequently asked to give his views on the current financial crisis in Europe, and he also offered his opinion of the situation in Japan. “Although the ratio of debt to GDP is undoubtedly very high in Japan,” he said, “there are several important differences with indebted European countries.

“The ratio of government- to private-sector spending is smaller in Japan, so economic activities in the private sector will mitigate decisive credit-related losses even if government debt continues to grow. Another point is that Japan’s debt cannot be said to be dangerously unhealthy yet. In net terms, the debt is scaled down because Japan makes loans overseas, which is different from the situation in Europe.

The association has launched a beautiful new website (http://jusfa.org/en/), and the university will be celebrating the twentieth anniversary of the Sylff program this year. A conference is being planned to commemorate the anniversary in September.

Sylff fellows and steering committee members are welcome to stop by the Foundation’s office on your visit to Tokyo. We look forward to seeing you!