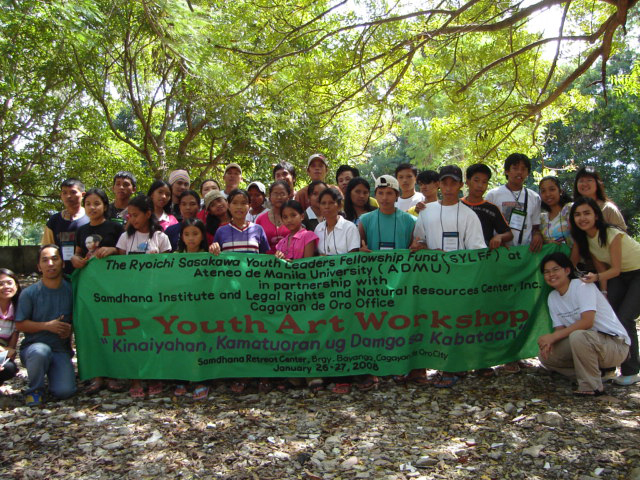 An art workshop involving young adults and teens from various indigenous people’s (IP) groups from different provinces in Mindanao, the island group at the southern part of the Philippines, was held on January 26-27, 2008 in Cagayan de Oro City, Misamis Oriental, Philippines, in partnership with the Legal Rights and Natural Resources Center, Inc. Lumads, or indigenous people, are native to Mindanao and are neither Christians nor Muslims. 1 26 participants were taught basic principles and techniques in art by Errol Balcos of the Oro Art Guild CDO, which they were able to apply to their own artworks when they were later given the chance to work on them.

Aside from the art session, there were lots of other activities that allowed the participants to share their identity and aspirations to one another. There was a sharing session, wherein the participants were able to name the IP organization they belonged to, the difficulties and concerns of their tribe, and their personal dreams for themselves and their communities.

There was also a cultural/solidarity night, where each IP group performed their native dances and songs. Other groups also recited poetry. Many of these presentations reflected the participants’ hopes and dreams; some chronicled their tribe’s history whereas others described the oppression and injustice they have suffered from.

There were also icebreakers that allowed the participants to explore the open areas of the venue and at the same time cooperate with each other in a fun, physical activity.

In order to maximize exposure to the living conditions and experiences of fellow Filipinos in the southern part of the Philippines, the SYLFF fellows visited the community of farmers in Sumilao, Bukidnon who participated in a historic walk from Bukidnon to Manila to pressure the Philippine government to bestow upon them ownership of a disputed 144-hectare land in Bukidnon, appropriately called the “144.” 2 This exposure trip was implemented in cooperation with Balay Alternative Legal Advocates for Development in Mindanaw, Inc. (BALAOD Mindanaw). The fellows listened to the farmers’ stories about their experiences during the Sumilao Walk, their struggle for ownership of 144, their dreams and plans for when the land is bestowed upon them, and their steadfast determination to implement more actions consistent with their goal. The fellows also had a chance to visit a camp that the Sumilao farmers had erected outside the Department of Agrarian Reform (DAR) Regional Office in Cagayan de Oro City, with the goal of imposing their presence and objectives upon the agency as a ubiquitous reminder that the latter has yet to fulfill their duty in relation to the said quandary. Here, the fellows witnessed and heard first-hand the difficulties that the farmers had to bear during this protest such as the foul smell emanating from the drainage on top of which they pitched their tent, the extreme heat at noon, the occasional rain, mosquitoes and other insects, the resulting diseases, separation from their families for at least one week, and the inability to till their lands.

Paula was an undergraduate scholar at the Ateneo de Manila University where she earned her Bachelor of Arts degree in Psychology. She became a SYLFF Fellow in 2003, and she received her master of arts degree in social and community psychology last March 2008. Paula is currently working as a Research Executive at TNS (a market research company).