Is There a Link between Music and Language? How Loss of Language Affected the Compositions of Vissarion Shebalin

How does stroke affect the activities of a musician? Meta Weiss, a cellist and Sylff fellow at The Juilliard School, used an SRA award to conduct research in Moscow about the life and music of Soviet composer Vissarion Shebalin, who lost his linguistic abilities after the second of two severe strokes. By studying Shebalin’s journals and sketchbooks, Weiss gained new insights into the changes in Shebalin’s compositional style after each stroke, which could have broad implications for our understanding of the functioning of the human brain. 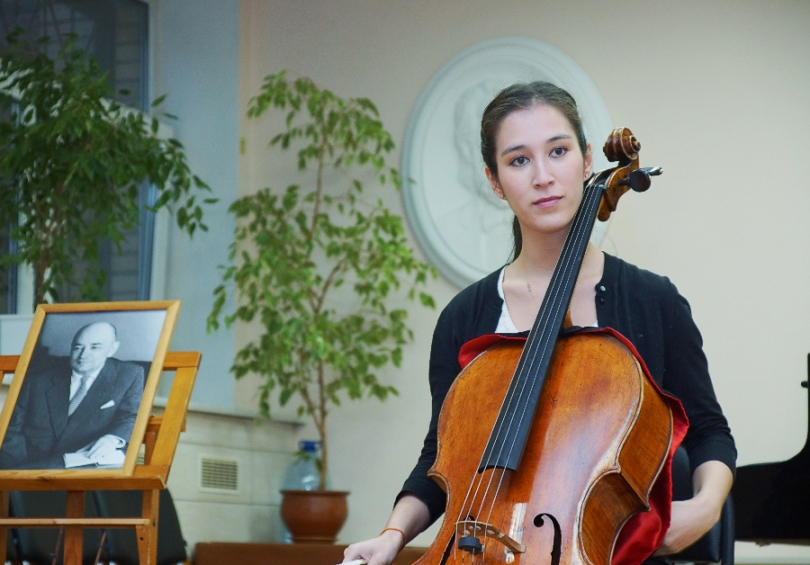 The author performing at the Shebalin Music School

Vissarion Yakevlevich Shebalin was born in 1904 in Omsk, Siberia. He lived in the Soviet Union until his death in 1963 and spent his entire professional life in Moscow. He began his musical studies in Omsk with Mikhail I. Nevitov before transferring to the Peter I. Tchaikovsky Conservatory in Moscow under the tutelage of Nikolai Myaskovsky. Those who knew him always admired his work ethic, modesty, organization, and innate ability as a composer. After completing his studies at the Tchaikovsky Conservatory, he taught there as a professor and eventually became its director, a position which he held from 1942 to 1948.

The year 1948 was a stressful time for all Soviet composers, and Shebalin was no exception. He was accused of formalism and stripped of his position in the Composer’s Union as well as at the Conservatory. Many of his family members believe that the first stroke that he suffered in 1953 was as a result of the many political stresses of the time. He was able to make an almost complete recovery following the stroke in 1953, with the exception of the lingering paralysis of his right arm and leg. He relearned how to write with his left hand, and continued to compose as well as teach. As a teacher, he remained extremely devoted to his students, even during his prolonged illness. 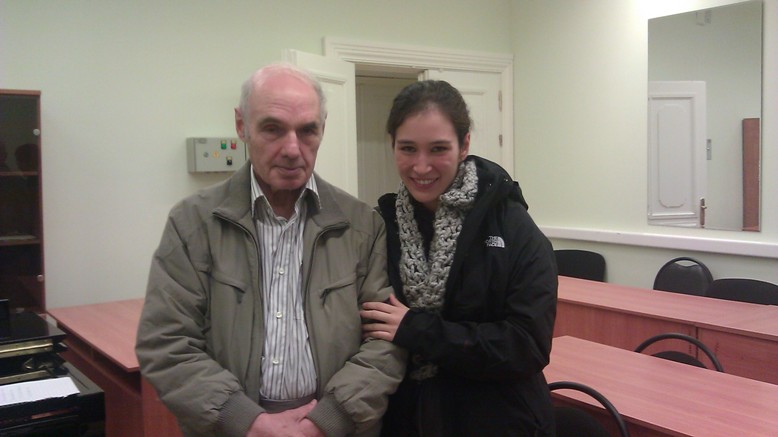 With a former student of Shebalin, Mr. Roman Ledenov

In 1959, he suffered a second stroke that resulted in aphasia. This was especially tragic because of his strong literary background and upbringing; before the strokes he was fluent not only in Russian, but also German, French, Latin and a bit of English. He worked with a team of linguists, neuropsychologists, and doctors to regain the Russian language, and although he was limited in his physical activities by his doctors, he set aside time every day to compose and keep a journal of his activities (with the help of his devoted wife, Alisa Maximovna Shebalina).

By virtue of the fact that Shebalin was a Soviet composer—and he deliberately did not do any self-promotion despite his reputation within the Soviet Union as a leading composer and composition teacher—his music and name essentially died with him in 1963. There is almost no literature on him that is published in English, and when his name does come up in music history articles, it is only in conjunction with the political events of 1948. Shebalin, however, has intrigued the neuroscience community for many years since his case was reported by Drs. Luria, Futer, and Svetkova in the 1960s.

My dissertation will be the first paper in any language to discuss Shebalin’s music through the lens of his medical condition. My aim is to analyze Shebalin’s music, focusing on his string quartets, both pre- and post-aphasia, in order to discover a link, if any, between Shebalin’s loss of verbal language and a change in compositional language. I am collaborating with Dr. Aniruddh Patel at Tufts University, a neuroscientist whose research focuses on music and language. While there have been other (better known) composers who suffered brain injuries, Shebalin is unique in that his condition was characterized by an almost complete loss of verbal language, and we can, based on his sketchbooks, create a fairly accurate timeline of his compositions as well as view the changes in his compositional process. This is inferred by studying the different motivic units Shebalin was constantly writing in his sketchbooks, as well as the more obvious indicators, such as handwriting (left vs. right) and pen color. The string quartets were chosen because they span the creative output of the composer from all periods of his life, and Shebalin himself said that they were the compositions he was most proud of and represented him the best.

After receiving my SRA grant, I traveled to Moscow for the month of October on a student visa and enrolled in the post-graduate program of the Tchaikovsky Conservatory. After exhaustive research working with a Russian-English translator, I was able to track down the location of all of the archival materials on Shebalin, and I was fortunate enough to obtain access to everything that was relevant to my research. This included the RGALI State Archive, the Glinka Museum Archive, and the Tchaikovsky Conservatory Archive and Reading Room. 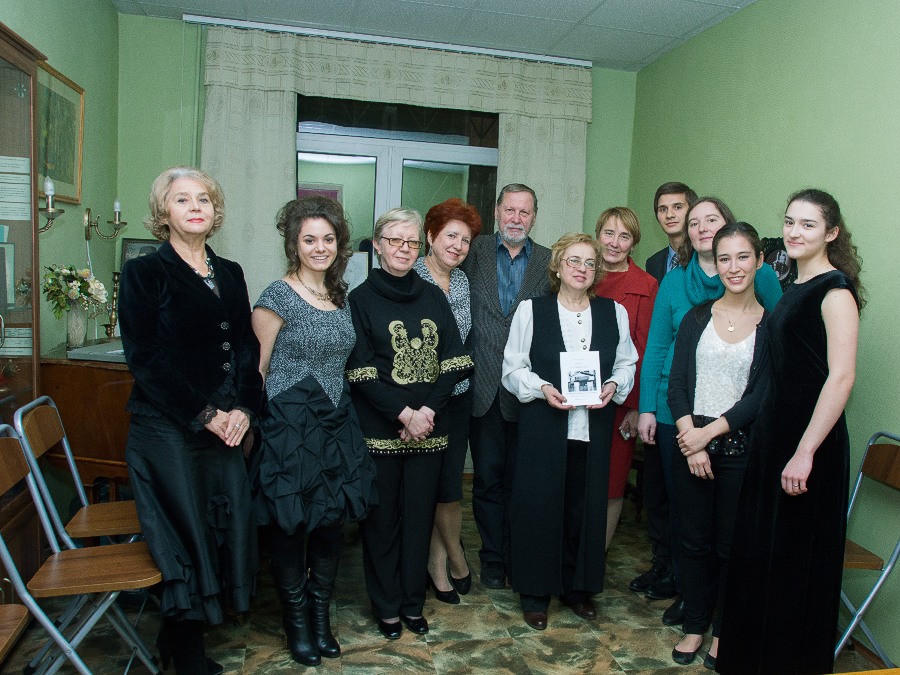 With Shebalin's family members and directors of the Shebalin Music School

Additionally, I was also able, using the Russian “vKontakte” social networking site, to locate the Shebalin family. They granted me permission to visit Shebalin’s summer estate, interview his surviving family members, family friends, former students, and doctors. Two of the three therapists/neuropsychologists who helped Shebalin with his linguistic rehabilitation following his second stroke had already passed away. Again using vKontakte, I reached out to Dr. L.S. Svetkova, the only living team member who treated Shebalin during his rehabilitation, and she agreed to send me her detailed notes and records that she kept while he was her patient.

The highlight of my research was the sketchbooks that are housed in the RGALI State Archive. Shebalin worked quickly and methodically, and was constantly scrutinizing his work. His sketchbooks proved to be much more revealing than any of the manuscripts or other scores. Unlike the detailed journals kept by both Shebalin and his wife, the sketchbooks are unbiased. They show his compositional process neatly and efficiently. Also, because his right side was paralyzed following the first stroke, one can clearly see the change from writing with his right hand to writing with his left hand. They also reveal that after both strokes, he did not simply go back to older works and revise them but he also created completely new and different works.

Shebalin’s music changed in several ways post-stroke. There are distinct differences in the structure of the themes, the imagery of the music, and the scale of his compositions. After his second stroke, he also experimented with a pseudo-twelve-tone style, though still within the tonal idiom, writing themes that featured all twelve tones melodically but relied on the functional harmony of tonality. Perhaps counterintuitively, his music was full of optimism following the onset of his aphasia, and, like his music before the strokes, the music was very clean and straightforward, but with new richness and depth despite the economy of means. 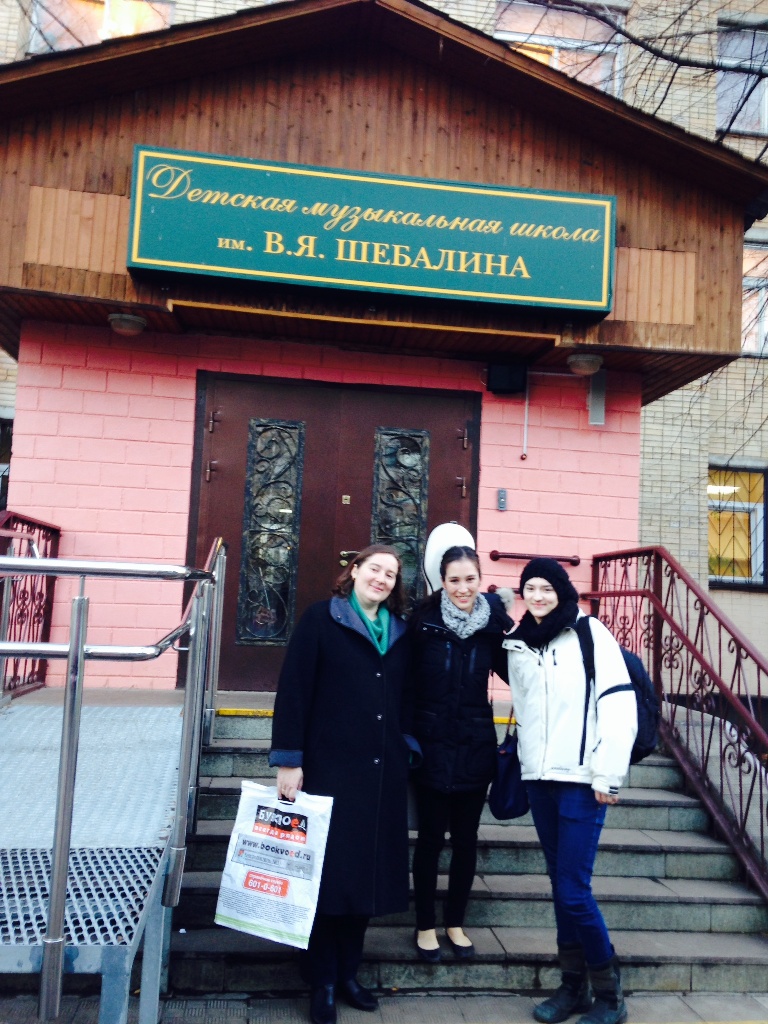 Upon further analysis, it is anticipated that although it will be relatively easy to differentiate the pre- and post-aphasia musical traits, it will be difficult to attribute an exact cause-effect relationship between the change in compositional language and loss of verbal language for two reasons.

First, despite the fact that both Shebalin and his close family and friends—many of whom were interviewed in the course of this research—deny that he ever buckled to political pressure, it will be difficult to definitively separate changes in his music due to political pressure and those due to his medical condition or changing musical taste. The second reason is that because of Shebalin’s fragile physical state following the strokes, he was easily fatigued and thus limited to composing only a few hours a day by his medical doctors. Preliminary analysis reveals that his musical style is markedly more succinct following the strokes, though this may be a result of the doctor’s restrictions.

Through the research conducted with the SRA grant, I was able to construct a complete picture of Shebalin and his compositional output. The future implications of this research are twofold. First, and perhaps most importantly, it would provide hope for stroke victims that in spite of the odds, Shebalin was able to continue to create music and express himself through his most beloved medium—composition. Second, by analyzing his music both pre- and post-aphasia, it may reveal certain processes or elements that are shared by both music and language that remain intact despite the loss of language (such as syntax and grammar).

In this way, my research may help future stroke victims to recover certain aspects of language and aid in our understanding of the brain and mind, a subject with implications far beyond just music or Shebalin.

SRA2012-2
FR: The Juilliard School (US)
TO: The Moscow Conservatory (Russia)
San Francisco native Meta (pronounced MAY-ta) Weiss made her international debut as a cellist at the age of seven in Utrecht, Holland. An acclaimed soloist and chamber musician, her performances have taken her to venues throughout the US and internationally, including Carnegie Hall, the Kennedy Center, Boston Symphony Hall, the Kimmel Center, and Royal Albert Hall. Top prizewinner in numerous competitions, including the Klein International String, Washington International, NFMC Young Artist, and Schadt Cello Competitions, Meta has also been featured as guest artist on NPR’s A Prairie Home Companion. The debut album of duoW, her violin-cello duo with Arianna Warsaw-Fan, entitled Entendre, was released in August on the Sono Luminus label. Meta Weiss is a doctoral student at The Juilliard School and received a Sylff fellowship in 2011.