How does the response of one industrial sector affect other sectors of an economy? To gain insights into this question, Shyamasree Dasgupta, a Sylff fellow at Jadavpur University in India, has been analyzing the response over the past four decades of India’s industry to the country’s climate change action plan. In this article, she reports on her research conducted in the United States with an SRA grant has broadened her perspective.

As reduction of carbon emissions is a “global goal,” the most aggregated pledges are taken at the international level (such as the Kyoto Protocol, Copenhagen Accord). Specific climate change mitigation policies are, however, mostly formulated and implemented by the national government or a set of national governments in line with such global pledges. Finally, different economic sectors take their decisions with regard to the pattern of their operations to curb energy use and emissions in line with the pledge and policies.

The response of a particular economic sector (such as the industrial sector) is not a stand-alone phenomenon. The responses are triggered by the actions of other sectors of the economy and at the same time have an impact on the rest of the economy. In fact, the aggregate impact of the decisions taken by one economic sector depends on its relation with the rest of the economy. For example, if an industry substitutes coal by electricity as an energy input, then emissions from that particular industry will come down, but from a macro perspective, aggregate emissions will be reduced only when electricity is produced with a fuel that is less carbon intensive than coal.

My doctoral research seeks to understand how Indian industries have responded during the past four decades under various domestic policy domains, with a special emphasis on the country’s recent climate change mitigation policies. Having estimated such response parameters (for example, price elasticity of energy demand—the change in industrial energy demand when energy price changes), I wanted to explore how the same industrial sector can be expected to behave in a future time horizon while interacting with other sectors in the global economy if some global emission reduction pledge becomes binding.

I got the opportunity to explore this issue with my SRA award along with mentoring and support from my home institute, Jadavpur University in India, and my SRA host institute, the Joint Global Change Research Institute (JGCRI, a collaborative institute of the Pacific Northwest National Laboratory and the University of Maryland in the United States).

An Integrated Assessment Model for India 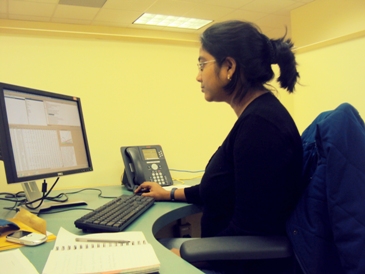 The author working on the Global Change Assessment Model at JGCRI

JGCRI has developed the Global Change Assessment Model (GCAM), an integrated assessment model representing the world economy that explores the links between energy, land use, water resource sectors, and a climate model. It incorporates both energy producing (such as electric power) and energy consuming sectors (such as industry). It creates a market where all the sectors are recursively solved for price and quantity, and the amount of carbon dioxide and other greenhouse gases emitted are estimated. The model could be used to explore responses of these sectors to several climate change mitigation pledges and policies.

GCAM divides the world into 14 regions, and India is one of them. The existing model employed the aggregated data for the Indian industry sector. Hence the responses towards any mitigation policy—can be so far analyzed only for the aggregate industry sector for India. My aim was to further develop the model with disaggregated industrial sectors for India, breaking up the industry sector into subsectors such as iron and steel, chemicals, and cement, along with a residual subsector named “other industries.” This would enable the user to analyze responses not only at the aggregate level but also for different subsectors in the context of Indian industry. The challenge was to break up the aggregate industry sector in an appropriate manner supported by authentic data so that the model would offer plausible solutions for years up to 2100 for all sectors and regions.

Being new to integrated assessment models, this was a true learning experience for me requiring several trials with different adjustments to obtain valid results! It was a stimulating experience solving the unforeseen errors cropping up during each trial run until I succeeded. I was greatly supported by my mentors and other colleagues at JGCRI in the process. In the course of my research, I came across fellow visiting scholars who were working on or had worked on several other sectors in other countries, including China and Brazil. 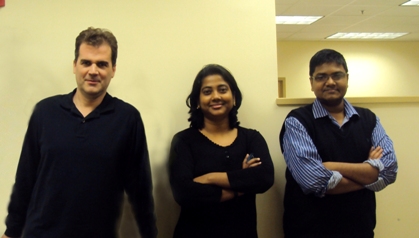 The model also used average values regarding how demand changes in response to changes in price in different industrial sectors. I substituted the average values for those specific to India that I had estimated prior to my SRA. Data were derived from the “Energy Statistics” and “Annual Survey of Industries,” published by the Ministry of Statistics and Programme Implementation, Government of India. The scenario demands a sharp decline in emissions from nonenergy-intensive industries, the phasing out of coal, and a significant increase in the use of clean electricity in industrial production. The use of biofuel emerged as one of the most effective medium-term solutions for Indian industries to meet the mitigation target.

Another objective of my SRA was to visit an energy-intensive industrial unit in the United States in order to compare its production and mitigation practices with its Indian counterparts. I was put in touch with the US Department of Energy through my mentor at the home institution, enabling me to visit such a facility. Things shaped up well, and I got a chance to accompany members of the American Forest and Paper Association on a visit to a pulp and paper company in Virginia. The day-long visit to the paper mill and discussions with the managers provided insights into their production processes and mitigation practices. 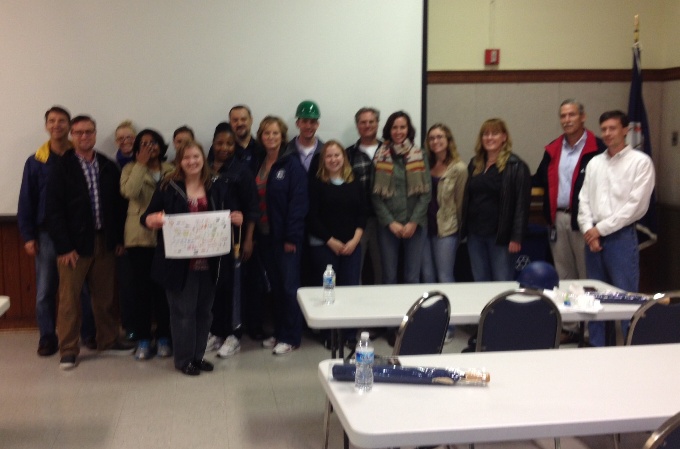 The mill was established in 1914 and has gone through changes in ownership and technology. It mainly produces corrugated paper from both raw wood and recycled paper. The pattern of energy utilization became a major issue of concern, as a result of which the mill became more energy efficient with greater emphasis on recycling and enhanced use of renewable energy. Over 80% of the electricity used by the mill is generated internally using multiple fuels, including black liquor, wood waste, and sludge. According to the company, it was the rise in fuel prices, rather than any particular energy or climate policy at the federal or state level, that drove it to reduce its dependence on purchased energy.

The SRA experience was extremely enriching for me. It not only helped me to augment my doctoral dissertation, which I am aiming to finalize in the coming few months, but at the same time provided me with an opportunity to work in the multidisciplinary and multiethnic environment of my globally renowned host institution.

SRA2010, 2013-1
FR: Jadavpur Univ. (India) TO: Univ. of Maryland (US)
Shyamasree Dasgupta is pursuing her Ph.D. at the Department of Economics, Jadavpur University, Kolkata, India, where she received a Sylff fellowship during the 2011–13 academic years. She earned her master’s degree from the Delhi School of Economics. She is interested in exploring how different economic sectors respond to climate change policies designed to board the path of sustainable development, and her doctoral thesis deals with the responses of Indian industries. She enjoys travelling and working with people from various parts of the world.