Cars and Capitalism in Contemporary Hanoi

Streets clogged with motorbikes in Hanoi have become familiar sights, as images are frequently featured in posters and magazines. Is there any room in this city now for automobiles, whose numbers are on the rise? Arve Hansen, a Sylff fellow at the University of Oslo in Norway, explores the socioeconomic transformation taking place in Vietnam through the lens of the nascent transition in the prevailing mode of personal transport from motorbikes to cars.

Vietnam has undergone a radical socioeconomic transformation during the last three decades under a program of economic reforms known as Doi Moi (“renovation”), officially adopted in 1986. Vietnam has grown from being one of the poorest countries in the world into to a middle-income, emerging economy, and the country is now frequently cited as a success story in economic development. Vietnam has moved from a planned to a market economy under a model described by the Vietnamese government as a “market economy with a socialist orientation.”

These changes make Vietnam an extremely interesting case in the study of both development and consumption. My PhD research into this topic in Vietnam focuses on what appears to be an ongoing transition away from motorbikes as the principal form of transport toward four-wheel automobiles in Hanoi. (It was thanks to Sylff Research Abroad that I was able to conduct long-term fieldwork in Hanoi, something absolutely vital to my project.)

My research approaches the trend as seen from the perspective, respectively, of the government, industry, car dealerships, and consumers. I have particularly emphasized the view of the consumer, using the car both to illustrate the ongoing changes in Hanoi as well as to analyze consumption trends more generally.

“Land of the Honda” 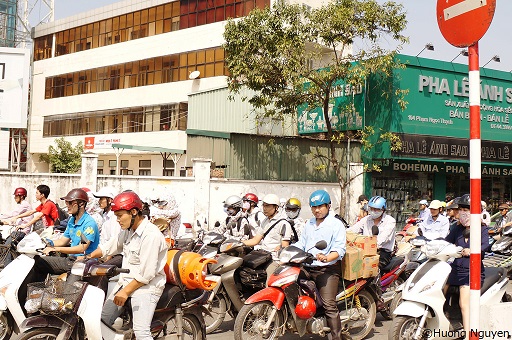 Vietnam used to be a country of bicycles but quickly became the “land of the Honda” during the 1990s following the start of the Doi Moi reforms. Today, in a country of 88 million people, there are around 35 million motorbikes. The sea of motorbikes in Vietnamese cities is now an iconic image of the country and one of the most popular motives for photographs by tourists. It has also created a highly individual transport situation, in contrast to the collective ideals of socialism.

Now, the passenger car is increasingly making its way into the streets, in the process clogging up traffic and making the motorbike more dangerous. My interest in Vietnamese automobility started several years ago while riding around the narrow streets of Hanoi on a motorbike and seeing how automobiles, struggling to make their way through traffic, were unfit for those streets. I asked myself why anyone would choose to drive a car there.

The answer is, of course, quite complex. It can also be very interesting as a starting point for understanding the socioeconomic changes and development challenges Vietnam is facing. The automobile is still a very expensive luxury; in fact, Vietnam is one of the most expensive places to buy a car due to high taxes. This, at the same time, makes the car a powerful expression of the inequalities embedded in the new economic system. The limited availability of the car also strengthens its position as a potent status symbol. A striking sight in the narrow streets of Hanoi is the frequency of very big luxury cars. This is a sharp break with the country’s socialist past, when displays of personal wealth were frowned upon and could lead to serious trouble.

In post–Doi Moi Vietnam, the automobile is one of the most obvious symbols of the new reality, in which getting rich is considered glorious and displaying personal wealth has become normal. In contemporary Hanoi, expensive cars are used actively to display wealth—sometimes strategically to show business partners that you are successful.

The new traffic in Hanoi (photo by Huong Nguyen)

Although the car is very much a status symbol, this is not the only reason that people buy them. Most of the purchasers with whom I talked report they were motivated more by safety and family reasons, as transporting one’s family on a small motorbike can be dangerous. The car also allows you to stay cool (and white!) under the scorching sun and dry during the frequent periods of heavy rain. There is also a paradoxical relationship between air pollution and car consumption: riding in a car allows you to temporarily escape the dangerously deteriorating urban air quality. The car is thus both a powerful agent in causing air pollution and a means of escaping from it.

The private car has had a central place in capitalist (and sometimes socialist) development and industrialization around the world. In Vietnam, the car in many ways represents a development dilemma. The car industry is targeted to play a leading role in scaling up Vietnam’s industrialization, with foreign investment (particularly from Japan) leading to positive linkages with, and technological diffusion to, the rest of the Vietnamese economy.

Among many other things, this requires a larger domestic market for cars. Studies have shown, however, that the streets of Vietnam’s cities cannot accommodate a transition to private cars as a predominant means of transportation. In Hanoi, the growing number of cars is already significantly increasing the frequency of traffic jams and further deteriorating the toxic air quality. Greener cars, though, are part of neither the transportation nor industrial plans of Vietnam.

In global discourse, the automobile is frequently (and deservingly) attacked as being one of the most environmentally destructive aspects of private consumption. In Hanoi I spoke with foreign environmentalists who argued that Vietnam needs to realize that the car belongs to the past.

The Car as the Future

Traffic and street vendor in Hanoi (photo by Arve Hansen)

Moving beyond private car consumption may be a worthy ideal, but the argument that the car is history fundamentally fails to understand the position of the car in an emerging economy like Vietnam. In this context, the car represents the future. From the government side, moreover, the car industry and private car ownership are symbols of economic success. And for the growing ranks of the middle class, replacing the motorbike with a car is emerging as one of their main aspirations.

The motorbike is still king in the streets of Hanoi, although it is increasingly being forced into an interesting coexistence with four-wheel vehicles. Most car owners keep their motorbikes as well and choose their mode of transport in a flexible manner, with motorbikes being used for shorter distances and to go downtown, while the car is used for travelling with the family, attending important meetings, or leaving the city. In this way the car also supports the creation of new practices among the middle class, such as travelling outside the city for a weekend holiday.

While people often heap blame on the motorbike for all traffic problems in Hanoi, in a city with very limited public transport options and lack of infrastructure, the motorbike is the main reason why mobility is still fairly good. The government has decided that it will limit the number of motorbikes in the future. Given the lack of alternatives, this may pave the way for the car. It will be interesting to see what the future holds for the two-wheeled icon of contemporary Hanoi.

SRA2013-1
FR: Univ. of Oslo (Norway)
TO: Vietnam Academy of Social Sciences (Vietnam)
Arve Hansen is a research fellow and PhD candidate at the Centre for Development and the Environment (SUM), University of Oslo. He pursued interdisciplinary development studies at the Universitat Jaume I in Castellón, Spain, and the School of Oriental and African Studies (SOAS), University of London. During 2013 he did extensive fieldwork in Hanoi with an SRA grant for his PhD on development and vehicle consumption in Vietnam as the country makes the transition to a capitalist economy. This involved spending a lot of time studying (and battling!) cars on a small motorbike in the narrow streets of the Vietnamese capital. Arve is a development geographer who prefers bicycles and public transport.