Rising India: When and How?

Joyashree Roy, the Sylff Programme Director at Jadavpur University since 2003, is researching multidisciplinary approaches to understanding developmental and climate challenges, and is among the network of scientists who shared in the 2007 Nobel Peace Prize awarded to the IPCC (Intergovernmental Panel on Climate Change). She provides an Indian perspective on climate challenges.

I often hear debates about how India might rise over the course of the next two and half decades, by which time the country’s population growth will be peaking. Should India reinvent the wheel of progress or should it try to catch up? Thirty percent of human settlements in India have already followed the path of progress that has proved successful in improving individual quality of life and are on the way to adopting solutions for improving social and environmental quality. So the real question is about the remaining 70% of settlements, where people do not have adequate access to basic necessities like energy for cooking, lighting, cooling and heating, safe drinking water, sanitation and hygiene, shelter from natural calamities, access to good healthcare service, sufficient skills to participate in mainstream discourse, and so on.

Through hard work, knowledge, wisdom and scientific endeavour, humanity has made tremendous progress over the past centuries in its ability to take care of personal hygiene, health, and to protect the social and natural environment. India is already on that pathway. There is no reason why the Indian population in poor settlements will not rise, taking advantage of the proven knowledge embedded in advanced technology, infrastructure design, and the energy service supply. If we talk of equality and justice there can be no denial of progress for the rest of India, given that no difference exists in human aspiration levels. The faster we move to bridge the gap, the faster peace and harmony will arrive, along with a society that can wisely deliver environmental good. Urban green spaces, urban agriculture, and urban biodiversity are boosting the growth of a new service sector.

Millions must bathe and cook in villages with no private water access arrangements and no modern fuel and technology access due to supply constraints and poverty.

Political arguments and scientific literature focused exclusively on rather simplistic interdependencies like “poverty as a driver of environmental degradation” or “indoor air pollution and rural women’s health” have failed to achieve more than incremental changes over the past three or four decades. Besides some fuel subsidy programs, these political arguments could generate some philanthropic extensions, NGO activities with government support for improved cooking stove programs involving the public distribution system, and some solar lantern distribution systems, in addition now to some solar-based micro grid system demonstration projects. But no transformative change can yet be seen. The debate has been rejuvenated in the context of “energy poverty and climate change.” Now is the time for questioning the past experiments that have involved a confused search for unknown alternative growth paths which are sometimes questionable from the point of view of both efficiency and justice.

How can India deny what we know to be the most efficient examples of land use patterns in human settlement design, in which a strip of road provides space for multiple basic service delivery infrastructure, including water supply pipelines, transport and mobility, telecommunications, drainage and sewerage, a grid-based electric supply, T&D network, street lighting, and avenue plantation? How can we not keep options for vertical and horizontal living patterns for Indians, while the rest of the world is enjoying these options and not discarding them? 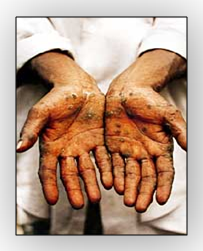 Typical drinking water access technology requires no electricity, but it can often deliver arsenic-laced water leading to health hazards for millions of people in Rural Bengal (Roy and Das , 2015).

Today there is no mystery about how to effectively purify water for safe drinking. Nevertheless, people still die of water-borne diseases in 70% of settlements in India. Lack of an adequate power supply is the major reason for a lack of safe water. How can there be any debate about extending the grid to supply power to all settlements? Why should there be policies or actions taken in favor of not extending the grid-based electric supply over larger parts of India in the name of a dream of an alternative developmental trajectory? This dream involves solar lanterns, solar power–based domestic lighting systems and micro grids, but does not lead anywhere except back to the initial state of affairs. Such experiments may have satisfied some philanthropists and enriched solar technology research outcomes. But ultimately their main result has been to delay progress in the quality of life of those communities by two or three decades.

Today, when frustration is leading to social conflicts over lack of access to basic facilities and competition for better facilities in local communities, the first step to be adopted is the establishment of grid power connectivity. It is grossly wrong to say that Indians need three bulbs to light their houses and no more, on the assumption that their aspiration levels are low. Do Indians have to consume less as latecomers in development while food waste is a way of life in many rich communities and countries? These are questions of justice.

It is easy to see that lack of adequate infrastructure kills aspiration. Potatoes, tomatoes, garlic, onions, and other vegetables and fruits are left to rot in many villages because of a lack of cold storage facilities. Food-processing industries are not able to move to the point of produce because of lack of adequate power connections. Life therefore remains stuck at subsistence level, and the day ends with sunset. This has nothing to do with aspiration levels. Hot summer days of 40 degrees Celsius and 98% humidity take a toll on life and labor productivity. It is not that simple Indians do not want air-conditioned spaces. Nor can any ethical consideration be put forward to say that Indians should not aspire to have space cooling as they become affluent enough to afford it, on the grounds that it will mean increased global warming. These are the minimum aspirations for good living and for productive thinking.

It was proved fifty years ago how India can achieve food security using modern tools and techniques and scientific research. Today, thanks to improved irrigation facilities and advanced agricultural equipment, India produces no fewer than a dozen top-quality varieties of rice, cereals, mangos, and so on. If strategically managed, these resources would be able not only to feed India’s own population but also to feed large parts of the rest of the world. The much-bruited adverse impact on soil quality and water table levels are misrepresentations of the environmental concerns: they result from a lack of investment in environmental resources management and in managing these resources. Experiences in the field give grounds for hope, when orchards are seen replacing paddy cultivation in some of the degraded lands of Punjab, drip irrigation is replacing flooded irrigation, and vegetables and horticulture are bringing in more cash and adding diversity to dietary habits.

As a result of anticipated high power needs over the next twenty years, even coal use will not peak within the next decade. Even if the most ambitious targets are met and coal use declines dramatically by 2050, coal capacity will still be at 2012 levels. Carbon capture and storage technology will need serious consideration if the capacity needs to be decarbonised at that time. Solar and wind power are increasing and together are expected to account for almost 40% of total electricity generation capacity in 25 years’ time. But it will be difficult to close the door on other non-carbon power sources like nuclear and hydro once the total generation capacity reaches levels six times higher than at present. These growth rates are merely those required for providing universal access to a decent life and are far removed from a lifestyle that would change dietary habits, currently based on locally grown agricultural produce and low per capita meat consumption (approximately 5 kg per capita a year, compared to 120 kg in the United States and 80 kg in Germany).

India’s energy-intensive industries are almost on a par with the best technologies globally. Technological advancement promises to deliver efficiency and justice simultaneously. Energy-efficient home appliances can deliver the same service level for millions more with the same energy supply, and perhaps without increasing total energy use. All the air conditioners in India today can be given a five-star rating. So there is no reason why India should not succeed in bringing its masses through the mainstream developmental pathway. The work of delivering universal human wellbeing (better shelter, better workplaces, a healthier environment, and so on) should not only be maintained but pursued with all vigour. It is now or never.

India cannot afford to miss out on the demographic dividend. The youth of the country needs to innovate the path toward their future wellbeing using modern science. If humanity is to live in peace and harmony—the two best indicators of human wellbeing—let’s not delay India’s progress in the name of experimenting with romantic ideas of alternative development models or “degrowth.”

Let us remind ourselves of what India has achieved so far, even after following global developmental trends. India’s total electricity generation equals that of Russia today and is at the same level as China in 1994. Less than 10% of urban households own a car; car-sharing is a lifestyle in India, 42% still use a bicycle, motorized two-wheelers are used by 35% of urban households, per capita CO2 emissions are less than 2 metric tons, compared to 17 MT in the United States, 7 MT in the EU, and 6.7 MT in China. Industries have begun to adopt cleaner production to maintain global competitiveness. Whereas the industrial output growth rate in the 1970s was roughly equal to the energy demand growth rate, in the current decade technology growth has decoupled activity growth and energy demand growth to such an extent that a five-fold increase in energy growth can now produce twenty-fold activity growth thanks to energy-saving technology.

From an Indian perspective, growth now, with the adoption of increasingly advanced technology, means progress and justice for the masses. The search for alternative development models should and will continue, given human curiosity and imagination. But experimenting with India would be equivalent to “development delayed is development denied.” How can we ask the poor of India not to aspire for better food, better hygiene, and better health? Who has given the privileged few the right to deny them these options?

Joyashree Roy is an ICSSR National Fellow, Professor of Economics, Coordinator, Global Change Programme, JU-Sylff Programme Director, Jadavpur University. This text was originally written for the German magazine welt-sichten, and was published in German in the September issue.