Ágnes Szunomár, a 2015 Sylff fellow at the Hungarian Academy of Sciences, summarizes her research on the recent trend of Chinese investment in Central and Eastern Europe. In her article, she describes how it differs from investments by other Asian and European countries.

Chinese outward foreign direct investment (OFDI) is one of the most spectacular developments in recent international economics in terms of its rapid growth, geographical range, and takeovers of established Western brands. Chinese firms mainly invest in Asia, Latin America, and Africa, where they search for markets and natural resources. They have also been active in the developed economies of Western Europe and the United States, however, that offer markets for Chinese products and assets that Chinese firms lack, such as advanced technologies, managerial knowledge, and distribution networks. Chinese firms are also increasingly investing in Central and Eastern European countries (CEECs). These investments are quite a new phenomenon and still constitute a small share of China’s total foreign direct investment (FDI) in Europe (10%), but since 2006 we have seen a growing influx of Chinese investments into the region, which is expected to increase further in the future (see the figure below).

The aim of my research was to analyse the motivations and location determinants of Chinese FDI in the largest recipient countries within the CEECs, with a special focus on the role and impact of host country macroeconomic and institutional factors.

China’s rise is often compared to the postwar “Asian Miracle” of its neighbors. An analysis of the internationalization experiences of Japanese, Korean, and Chinese companies reveals several common features as well as some differences. One of the main common characteristics shared by all three is the creation and support of the so-called national champions, that is, domestically based companies that have become leading competitors in the global market. In fact, during their developmental period, both the Japanese and Korean governments gave strong state financial support to their companies in order to protect and promote them as well as to strengthen them for international competition. China has followed this example in subsidizing domestic industries and supporting their overseas activities, for example in the form of government funding for OFDI. 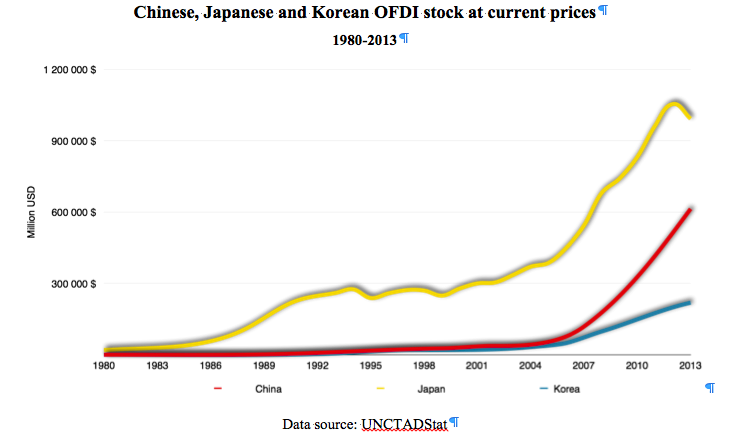 Although the CEECs differ in many respects, they do have some features in common as possible locations for East Asian investors. Their economies have been in the process of catching up over the last decades, defined mainly by European powers. FDI has played a key role in their restructuring. Investment from East Asian countries in the CEECs began as early as the 1990s (with a Japanese Suzuki factory in Hungary).

In the past decade most of these countries became increasingly interested in boosting trade and attracting investments from East Asian economies. The global economic and financial crisis of 2008 intensified these ambitions. The largest recipient countries of East Asian investments within the CEECs are Hungary, Poland, the Czech Republic, and Slovakia. Around 90% of foreign investments in the four countries are from Europe, with an average of only 7.4% of FDI from other countries, mainly from the USA, South Korea, Japan, and China.

Utility of the Research

Typically, the international literature examines the motivations of Chinese OFDI on a global basis, and most previous studies have focused on China's growing investments in the developing world. Studies dealing with the characteristics and motivations of Chinese FDI in Europe rarely deal with the Central and Eastern European region. Although significant research has been done on FDI flows to the CEEC region, most of these studies do not include Chinese investments. The literature is thus incomplete, and detailed description and analysis of this issue is lacking. The primary aim of this research was therefore to complement the literature.

Besides complementing the literature, my results also have an inherent message for CEEC corporate decision makers and policy makers. For the CEECs, the Chinese relationship is increasingly a priority, especially since the economic and financial crisis of 2008. Most countries in the region see a closer relationship with emerging economies such as China as a promising way of recovering from the recession. The further development of corporate or government strategies in this regard may be supported by the results of this research.

Given the broad concept and geographical scope of Central and Eastern Europe, instead of focusing on the relations of all the region’s countries with the main East Asian investors, the research concentrates on a fair sample of CEEC countries: the Czech Republic, Hungary, Poland, and Slovakia. These countries were selected in consideration of their size, reflecting their proximity, growing business ties, and geographic location, as well as their political and economic relations with China. The Czech Republic, Hungary, Poland, and Slovakia are the most developed and most important players in the CEEC region and are members of the Visegrad Group as well as the EU and the Schengen Area.

At the beginning of the research I reviewed theories and literature on FDI location determinants with a special focus on FDI determinants in the CEECs. The next step was to analyze the changing patterns and motivations of Chinese and other East Asian OFDI as I tried to find similarities and differences between the characteristics and motivations of Chinese, Japanese, and South Korean FDI in the CEECs. In addition, I provided a detailed description of the impact of both macroeconomic and institutional factors based on case studies and interviews with East Asian firms established in the CEECs.

To continue this research in the near future I also prepared an online opinion survey on East Asian companies' investment patterns, which will be sent out to several Chinese, Japanese, and South Korean companies operating in the CEECs to collect more information on their activities, motivations, and strategies.

My investigation into the motivations of Chinese OFDI in the CEECs shows that Chinese investors mostly search for markets (market-seeking investment). Investors are attracted by the relatively low labor costs, skilled workforce, and market potential. EU membership allows Chinese investors to avoid trade barriers, and the countries serve as an assembly base due to the relatively low labor costs (efficiency-seeking investment). However, in parallel with the increasing number of mergers and acquisitions in the region, strategic asset-seeking motives have become more important for Chinese companies in recent years. Chinese investments are also motivated by the search for brands, new technologies, or market niches that they can fill in European markets. For example, in early 2012 Liugong Machinerys acquired Huta Stalowa Wola’s construction equipment division and its distribution subsidiary, Dressta. Secondly, in 2013 China’s Tri Ring Group Corporation acquired Polish Fabryka Łożysk Tocznych (the biggest Chinese investment in Poland so far), a producer of bearings for the automotive sector.

Chinese investment has flowed mostly into manufacturing (assembly), but over time services has attracted more and more investment as well. For example Hungary and Poland are home to branches of the Bank of China and the Industrial and Commercial Bank of China, as well as offices of some of the largest law offices in China (Yingke Law Firm and Dacheng Law Offices). Regarding the Chinese entry mode, there are examples of greenfield or quasi-greenfield investments (Huawei, ZTE, Lenovo), as well as mergers and acquisitions (Wanhua) and joint ventures (Orient Solar, BBCA).

Having examined the CEEC-East Asian economic ties, my conclusion is that while Japan and South Korea previously had larger roles, China has increasingly come to the fore in recent years. Analyzing the difference in motivations before and after the global economic and financial crisis suggests that although the crisis did not have a direct impact on East Asian investments in the CEECs, there was an indirect impact since it was in the aftermath of the crisis that the CEECs started to search for new opportunities to help them recover from the recession. For example, Hungary's “Opening to the East” policy was initiated after (and partly as a result of) the crisis, but the crisis also made Poland look eastward. China took these opportunities and has increased sectoral representation of Chinese firms in the CEECs in recent years.

The results of my research suggest that the characteristics, motivations, and location determinants of Chinese investments in the CEECs differ somewhat from Western as well as other East Asian investors’ motivations. While macroeconomic factors, such as labour costs, market size, and corporate taxes, had and continue to have a decisive role in selecting FDI locations for investors from other countries, Chinese firms seem to attach greater importance to institutional factors. Country-level institutional factors that impact Chinese companies’ location choice within the CEECs seem to be the size of the ethnic Chinese population, as well as investment, privatization and public procurement opportunities, but also good political relations between the host country and China. One example is Hisense’s explanation of the decision to invest in Hungary. Besides traditional economic factors, this decision was apparently motivated by the “good diplomatic, economic, trade, and educational relations with China, the sizable local Chinese population, Chinese trade and commercial networks, and associations already formed.” Another example is the Nuctech company, which established its subsidiary in Poland in 2004 and participated in public procurement.

My research also suggests that the CEEC region is not homogeneous and that there are differences in the economic relations between the CEEC countries and China. Moreover, the CEECs often view each other as competitors rather than working together to achieve shared goals (that is, to attract more Chinese investment). This is unfortunate, since according to the literature on the perceptions of the CEEC region among Chinese, many Chinese business investors consider the region to be a unified bloc.

To conclude, I found that:
(1) The role of Chinese investments within the CEE region increased significantly after the crisis, and investment from China will be increasingly important for the countries of the region in the future, as the Chinese share of total inward FDI in the CEECs increases.
(2) Chinese investments in the CEECs differ somewhat from other countries’ investments in the region in terms of motives, which in the Chinese case are driven by both political and economic factors.
(3) The level and warmth of political relations with the host country have an increasingly important influence on Chinese companies’ investments in the region. And (4) the CEE region tends to be seen more as a unified block than as a group of countries by the Chinese. Greater cooperation among the CEECs might therefore help to increase the chances for successful economic relations with China.

Ágnes Szunomár is a research fellow at the Institute of World Economics, Centre for Economic and Regional Studies of the Hungarian Academy of Sciences, where she is the head of the Research Group on Development Economics. Her research focuses on China’s foreign economic relations, including relations between China and Central and Eastern Europe. She holds a PhD in economics from the Corvinus University of Budapest and was selected for a 2015 Sylff Fellowship.