Supporting Two Families: Remittance-Sending and the Integration of Immigrants in the United States

David D. Sussman, a 2003 Sylff fellow of the Fletcher School of Law and Diplomacy at Tufts University, reengages the findings from his master’s thesis, which analyzed how remittance-sending affected the integration (self-sufficiency) of immigrants in Boston, and interprets them given the current political environment in the United States. This article was written in early January 2017. 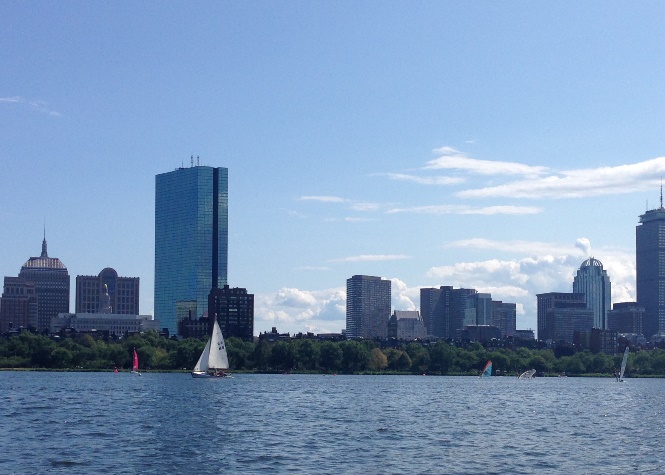 During the recent presidential election in the United States, the topic of immigration was once again brought to the forefront of political discussions. One candidate, Donald Trump—now president-elect—called for building an impregnable wall on the country’s southern border, limitations on refugee admissions, the deportation of millions of immigrants, and a registry of all Muslims. Putting aside debates over the sensibility (not to mention the legality) of these propositions, we might focus on the lives of refugees and immigrants who already reside in the United States and thereby test the critique that they are not integrating into society quickly enough.

Do we fully appreciate the difficult financial situation of immigrants in the United States? How might our perspectives shift if we better understand the double bind that some of them face, to improve their local situation while also caring for family members overseas? Despite ideological differences between liberals and conservatives on the positives and negatives of migration, each side can agree in hoping that new arrivals improve professionally and educationally. Notwithstanding the passage of time, the research presented here, from my Sylff-supported master’s degree, remains relevant. This article provides relevant background explanation, an overview of my approach, and a summary of findings and briefly reflects on the implications, given present-day political and economic circumstances.

An investigation of this topic was inspired by previous work as a resettlement case manager with the International Rescue Committee in Boston. During my time working with refugees from Africa and Latin America, I was moved by their ongoing struggles. Beyond needing to learn about a new city and culture, and often burdened by traumatic past experiences, US government protocol required them to quickly find any possible job, often at the minimum wage. They worked long hours in such positions as grocery baggers, hotel bellhops, or, if fortunate, as nursing assistants. Their expenses for rent, food, and other basic necessities stretched them to their limits, as Boston was and remains to this day one of the most expensive places to live in the United States. At the same time, nearly all of the refugees sent weekly or monthly remittances to loved ones they had left behind. Often, they received phone calls at all hours of the day and night, from friends and family pleading for further support. The financial challenges faced by these resilient and hard-working refugees was readily apparent, and I knew that, if given the chance one day, I wanted to further study and better understand their circumstances.

For millions of persons who cross borders to seek a new and better life, the memories of and commitment to friends and family back home lead them to maintain connections with their place of origin. In many situations, remittances (financial resources that migrants wire back to their country) serve as the primary purpose of migration, while for those coming from conflict-affected countries, it is primarily safety and freedom that they seek, with remittances as a significant secondary objective. My research examined the potential impact of sending money on immigrants’ integration, as measured through financial and educational “self-sufficiency.”

Immigration remains part and parcel of the United States. As a nation founded by immigrants (at the expense of indigenous populations), new waves of arrivals to the United States over the past two centuries led to continual processes of adjustment and varied degrees of inclusion in the country’s social and economic fabric. As of 2010, more than one in eight persons in the country had been born abroad.1 The foreign-born population remains quite diverse today (53.6% from Latin America, 28.2% from Asia, 12.1% from Europe, and 6.5% from elsewhere),2 though among new entrants, Asians now outnumber Latin Americans.3 The historic role of Massachusetts and the Greater Boston region as host to immigrant populations continues to the present day. The state’s number of immigrants nearly doubled to 1,046,155 between 1990 and 2013,4,5 such that it now has the eighth highest percentage of foreign-born residents, rising from 9.5% in 1990 to 15.6% in 2013.6 In the state’s urban areas, such as Boston (Suffolk County), 27.4% of persons were foreign born as of 2013.7

Globally, remittance amounts have risen dramatically over recent decades—from less than $2 billion in 1970 to $70 billion in 1995,8 and despite a brief slowdown during the global financial crisis, to more than $430 billion in 2015.9 Sending remittances is a high priority among the financial decisions that immigrants face. The 2003 National Survey of Latinos in the United States found that many respondents remitted before taking care of their bills, others paid for their household expenses first, and only a few did not consider sending funds to be important.10 According to one Mexican interviewed, “Before anything, I send them the money because they count on it. Then afterwards I pay my bills, my rent, but the first thing I do is send it.”11

Economic self-sufficiency is often defined simply, as when immigrants’ wages attain levels similar to those of native populations.12 In reality, it can also be measured in various other ways, particularly education and social achievement. For example, the Massachusetts Department of Housing and Community Development’s assessment form to determine self-sufficiency demonstrates the complexity of factors influencing the measure; areas of focus include employment, education, health, childcare, family development, housing, income management, transportation, resident participation, and nutrition.13 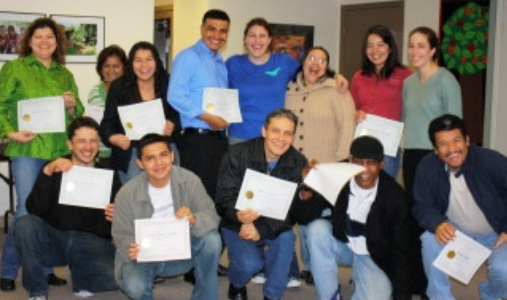 For my research I focused on studying Somali refugees and Salvadoran economic migrants (among a broader range of Latin Americans) living in Boston due to their significance as immigrant groups and, with preliminary evidence showing that they remitted at high levels, the potential for differential findings between them. To connect with potential respondents, I volunteered in English as a Second Language (ESL) classes at two community organizations supporting immigrants, Centro Presente and the Somali Development Center. In this way, it was possible to meet clients who felt comfortable agreeing to qualitative interviews (16 Somalis and 19 Central Americans, 6 of them Salvadoran). Notably, those who visited the agencies were probably both a) poorer and more in need of support than more wealthy families and yet b) better connected and more successful than other persons in that community who did not have knowledge of or the ability to attend a social service agency. 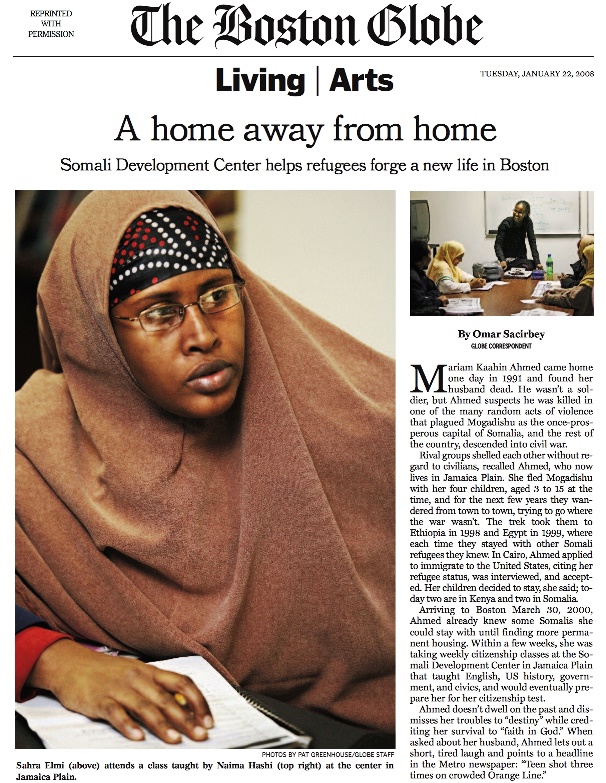 The thesis research was unique because it 1) conducted extensive one-on-one interviews, using qualitative as opposed to quantitative analysis, 2) focused on the economic and educational self-sufficiency of the immigrants, which was a narrower approach than the multiple factors that other authors had investigated, and 3) considered the impact of remittance sending by both refugees and economic migrants.

Overall, the study found that sending remittances could be correlated with a difference in the self-sufficiency of migrants. In short, sending money abroad reduced immigrants’ available resources for advancing their careers and pursuing education, thereby making them less likely to become self-sufficient. In a number of cases, interviewees directly noted that they saw how their lives were impacted by remitting, potentially reducing opportunities.

The interaction between individual household characteristics and remitting is depicted in the figure I created below, which I refer to as the “Remittance/Self-Sufficiency Cycle.” A combination of financial, educational, and social factors lead to the attainment of household self-sufficiency and influence the amount of money that immigrants have available to remit if they wish to do so (see no. 1 in the figure). The sending of money to friends and family overseas can affect the ability of a family to achieve self-sufficiency; the monies that would have otherwise been invested in such areas as education, housing, and job skills are instead remitted (see no. 2). 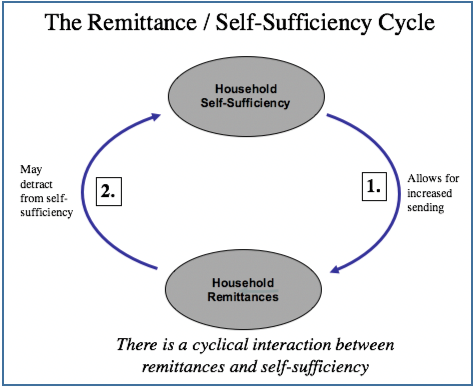 Interestingly, there also appeared to be an important distinction in the approach to self-sufficiency. While Somali refugees hoped to get jobs and thought about the long-term, a significant number of the Central Americans wanted to remain in the United States long enough to earn money and then return to their country of origin. The Latin Americans pursued education to improve their job prospects but seemed less focused on aspects of permanent relocation. It is possible that differences in the economic situation of the two groups existed because, as refugees, Somalis qualified for a period of government assistance, whereas many Latinos (particularly those who entered illegally), as economic migrants, did not.

As such, the impact of remittances can be studied at two points: at “basic self-sufficiency” and at “long-term self-sufficiency.” The majority of the immigrants interviewed made sure that they addressed some but not all basic needs before sending remittances. Considering the elements of basic self-sufficiency, food and housing were priorities. Education and language abilities, however, often came second to sending monies overseas. Looking at long-term self-sufficiency, few immigrants were able to consider these needs. For most of them, if not all, the purchase of a house was beyond the realm of possibility, as was buying items like cars and computers. While a number improved their education level and advanced in their employment, they remained at relatively low wages. Nevertheless, when immigrants reflected on their life in the United States, they often made a comparison to their country of origin and so, despite their present difficulties, considered themselves fortunate to be in the United States.

We live in a mobile world, and the long-term prognosis is that migration pressures will continue. The significance of this study’s findings is that they show how, given economic obligation to family members, migrants are doubly responsible for both their relatives’ livelihood and their own well-being.

In light of the recent transfer of power from a Democratic to a Republican administration, this deeper understanding of immigrants and their self-sufficiency remains particularly important. On the one hand, liberals can look at the struggles of immigrants as evidence that more (e.g., legal protection and social services) is needed to support their successful adjustment to life in the United States. There are challenges, however, and with deepening inequality as a broader societal concern, one question is whether some immigrants, burdened by caring for families across borders, may become trapped as an underclass.

On the other hand, conservatives may point to difficulties in achieving self-sufficiency as evidence of the need to restrict certain types of immigration to the United States. They may believe that when many immigrants have a hard time attaining a middle-class lifestyle, it exemplifies their failure to work hard and succeed in the US economy. This misconception may lead to anti-migrant policies under the Trump administration, but even if there are limitations on immigrant entry, millions of foreign-born residents will still possess a legal right to remain in the United States.

Under these circumstances, what is in citizens’ control—regardless of government policy—is their support and welcoming attitudes toward newcomers, and a steady pressure placed on policymakers. In this way, their individual or collectively organized actions can make a positive difference in the lives of new arrivals, and society at large.

9World Bank. 2016. “Remittances to Developing Countries Edge Up Slightly in 2015,” accessed at: http://www.worldbank.org/en/news/press-release/2016/04/13/remittances-to-developing-countries-edge-up-slightly-in-2015.

David is currently an Associate Professor in the Department of International Studies at Tokai University, and a Fellow at the Institute for Global Environmental Strategies (IGES). As a scholar-practitioner, his current research examines global interconnectivity, linking consumers’ use of material resources to the environmental and social impacts in communities where they are sourced. At Tufts University, David served as a Visiting Scholar at the Global Development And Environment Institute (GDAE), and designed and taught undergraduate courses on natural resource conflicts and forced migration. David earned his B.A from Dartmouth College, and M.A. and Ph.D. degrees from The Fletcher School, Tufts University.