Chika Ezeanya-Esiobu is a Sylff fellow from Howard University in the United States. She was also awarded an SLI grant in 2016, with which she implemented a workshop on leadership training for future young leaders in Rwanda. Born and raised in Nigeria, Chika first visited Rwanda as a junior consultant for the World Bank during her PhD studies and was enchanted by the peaceful, welcoming, and hardworking nation. She joined the faculty of the University of Rwanda after completing her PhD at Howard and, since then, has been vigorously contributing to further economic and social improvement in the country. The following article is based on her recent research on indigenous technology and how it can empower rural women in Rwanda. 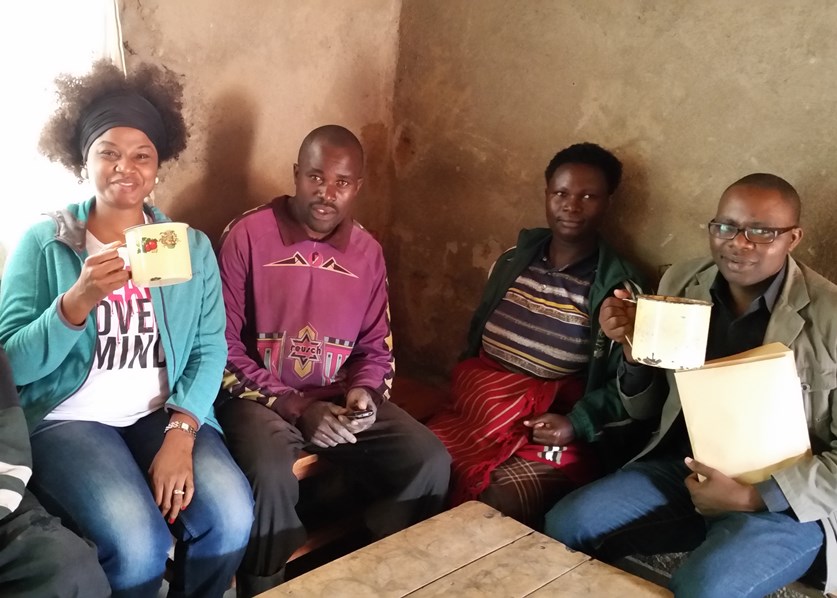 Technology is more strategically positioned to trigger innovation and growth within a community when it is founded on the realities and lived experiences of a people; indigenous technology is that technology with roots in a community or group of people. Many industrially advanced societies commenced their journey with indigenous technology as the starting point, from where they have traveled to reach their present place. A dependence on imported technology often leads to stunted growth of the industrial system. As such, and because innovation and creative output arising from indigenous knowledge is a pertinent driver of economic growth, societies aiming toward unhindered industrial progression will need to seriously explore options available within the indigenous technological knowledge pool (Basu & Weil, 1998). Processes, products, services, and systems built in response to existing and projected challenges or even the realities of a particular environment are essentially sustainable and hold potential for further enlargement by community members.

Rural women are increasingly becoming the major custodians of indigenous technology. There are several reasons, including the traditional role of women in homesteads and the migration of men to urban areas in search of employment. Rural women apply indigenous technology to agriculture and food processing, family healthcare, livelihood management, and community development; even where they have access to employment in rural areas, women do not always have access to modern technology for use in the production process and still turn to traditional methods and techniques. Although many governments concerned with rural women’s economic empowerment have made efforts to institute modern technology and make it more accessible, its adaptation and sustainability has been a major challenge. The high cost of importing modern technology pales in comparison to the needed investment of time and funds in continuous education, training, and maintenance of that technology.

In rural areas, women are often marginalized in the distribution of jobs, mostly due to traditional beliefs about men being breadwinners and women being homemakers. Women in rural areas often have to contend with social norms that limit their ability to combine work, family, and other social and personal responsibilities. When they are engaged in meaningful employment, women tend to be clustered in fewer sectors than their male counterparts. In the field of agriculture, for instance, women tend to dominate the subsistence production sphere, even in situations where other nontraditional and commercial farming opportunities exist.

Despite the noted challenges, available empirical evidence across the world indicates that with women being increasingly in control of household resources, either through their own earnings or by cash transfers, the chances of overall economic advancement are remarkably improved. Indeed, at the family level, research outcomes from countries as varied as Brazil, China, India, South Africa, and the United Kingdom point to the fact that expenses on overall family well-being and children’s education increase when women have greater access to household income (World Bank, 2011).

Fifty-four percent of Rwanda’s population is female, while 30 percent of rural households are headed by women. Many rural households are not entirely food secure, because they cannot depend on farming due mainly to environmental factors and their utilization of technology that requires intensive labor (IFAD, 2012). In rural areas, women often cultivate smaller plots of less than one hectare and depend on rain to irrigate grain crops, rear traditional livestock, and grow vegetables. Few female farmers compete with men in the cash crops production sector, which occupies only about 4 percent of total arable land. In essence, female-headed households in rural Rwanda are susceptible to poverty and malnutrition.

The government of Rwanda has shown an unwavering commitment to advancing women on several fronts. Economically speaking, the percentage of Rwandan women who are in paid employment is higher than ever in the history of the nation. The government of Rwanda is one of the few countries in the world that have a dedicated Gender Monitoring Office tasked with ensuring the mainstreaming of gender issues in policy making. Still, as in many other parts of the developing world, unemployment and underemployment remain prevalent in Rwanda, especially among poor rural women, who are mostly subsistence farmers. This is despite several pro-poor policies by the Rwandan government that attempt to accommodate the needs of rural women. Several factors account for this, including low financial literacy, poor information access, and weak bargaining power (Pozarny, 2016).

The need to find homegrown and grassroots approaches to the economic empowerment of rural women in Rwanda informed research on the role that indigenous technology can play in achieving this aim. The research was conducted by a group of researchers from the University of Rwanda led by the author and supported by the International Development Research Center of Canada. Studies were conducted on the possibility that products based on indigenous technology, such as indigenous beverages (banana wine and juice, sorghum beer and drink), indigenous vegetables, and traditional fermented beer, could contribute to the economic empowerment of rural women.

The results indicate that indigenous-technology-based beverages and fermented milk hold great potential for improving the livelihoods of rural women. We interviewed 100 rural women who produce or sell indigenous beverages and 100 rural producers of fermented milk, who said that they make profits of between 40 US cents and 1 dollar per 20-liter plastic container. Sales can range from a few jerry cans to as much as 40 per week. Female producers also employ a number of casual workers, sometimes as many as five. Many female producers of indigenous beverages note that they were unable to afford meals for their families prior to beginning the business but can now pay school fees, purchase health insurance, and secure decent living spaces. Although these women do not receive government support—as they have said themselves and government officials have confirmed—they do pay taxes. However, many of them note that tax preparation takes up a lot of time, and many have to shut down business during tax preparation. Women producers also find it difficult to obtain loans from financial institutions due to their inability to provide collateral. Women say that although they would like to package their drinks, the cost of packaging is prohibitive and the packaged product would be outside the reach of their current customers.

The study established that rural women can benefit much more economically when diverse beverage products are on offer, especially when basic hygienic and aesthetic standards are met. Rural tourism is receiving a boost in many countries around the world. In France, for instance, tourists travel from all over the world to rural France in order to have a taste of locally made French cheese, crafted using centuries-old indigenous technological know-how. Rwanda can tap into the rural tourism market by identifying local champions in various rural areas and supporting them with branding and marketing.

Female rural producers say that indigenous vegetables like urudega, ibidodoki, inyabutongo, and isogo have healing properties and have been used to effectively treat such conditions as anemia, ulcers, constipation, diarrhea, oral candidiasis, abdominal pain, and more. They testify that demand for these vegetables in rural areas far outweigh supply, whereas in the urban areas only a few traditional vegetables, such as dodoki, are in high demand and are quite expensive, as demand far outweighs supply. Female rural indigenous vegetable farmers note the penchant of urban dwellers for imported vegetables, such as cucumber, cabbage, and tomatoes. They say they are unable to produce sufficient quantities of indigenous vegetables due to limited land, lack of manure, limited knowledge, diseases and pests, the damaging effects of climate change leading to droughts and heavy rains, and the perception that the youth and urban dwellers hold of certain traditional vegetables as being food reserved for poor rural dwellers.

The Rwandan government and development partners can play a key role in improving the production of indigenous products by rural women using indigenous technology. Rather than the previous emphasis on imported technology, which is expensive, difficult to maintain, and does not foster local technology, emphasis can be placed on supporting rural women through a variety of means, including training on processing, hygiene, aesthetics, customer service, financial literacy, branding and marketing, business management, and simple production methods. There is also a need to provide these women producers of indigenous beverages with expanded access to finances, as well as ensure that they have improved market access, infrastructure, and facilities. Moreover, the public needs to be enlightened on the nutritious content and health benefits of indigenous products. The government of Rwanda will then be more likely to achieve its vision of turning the country into a self-sustaining economy, not dependent on external funds or resources for advancement and growth, in record time.

(NB: The full article will be published in 2018 as a special issue of the journal Indigenous Knowledge: Other Ways of Knowing.)

SLI2015: Training for the Best and Brightest Students on Leadership and Character Building in Rwanda

Dr. Chika Ezeanya Esiobu is the author of Education and Indigenous Knowledge in Africa (Springer:2019). A researcher, teacher, non-fiction and fiction writer and a public intellectual, Dr. Esiobu holds a PhD in African Development and Policy Studies from Howard University in Washington D.C. Dr. Chika is convinced of the ability of Africans to transform Africa throught the acknowledgement of the significance of Africa's indigenous knowledge across fields and sectors. Chika has been invited to present her ideas across cultures, countries, institutions and platforms, including the London School of Economics, Pan-African Parliament, United Nations, African Union, World Bank and Standard Bank South Africa, to mention few.

2016 leadership training that introduced young Rwandans - with potentials for leadership - to the concept of effective leadership and its role in ensuring economic growth and social advancement at all administrative levels. At the end of the training, beneficiaries attested to being more equipped to effectively discharge their present duties as youth leaders, in addition to being prepared for higher leadership responsibilities as older adult in Rwanda.

Thank you very much for sharing your experience! Indeed it is important to review what we already got even though many imports from outside are accessible in this world. I also love your strong message on TED talk which relates to this article. Please check it out everyone! https://www.ted.com/talks/chika_ezeanya_esiobu_how_africa_can_use_its_traditional_knowledge_to_make_progress Aya Oyamada

Thank you very much, Aya. Sylff made it possible for me to complete my doctoral studies with minimum stress; I was also able to focus on my research and to travel to West Africa for fieldwork. -Chika Ezeanya-Esiobu-

Just wonderful, to find out there a few young Africans such as Dr. Chika Ezeanya-Esiobu who, at last, have come to realize that Africans aren't intrinsically poor...Let's all together gather momentum towards implementing true progress for Africans! -François Nsenga-

Chika Ezeanya-Esiobu, I shared your inspiring TEDTalk presentation with someone who runs an education programme in The Bahamas. She was so fascinated by your talk that she asked me to find out how she could get in touch with you. She has a major programme this month that she would like to discuss with you. I would be most grateful if you could contact me as soon as possible. Thank you -Dr. Madgeena Lynch-