Grant Morris, a 1999–2000 PhD Sylff fellow at the University of Waikato in New Zealand, visited the Sylff Association Secretariat in Tokyo on Wednesday, July 10, 2019. He has been working at the Victoria University of Wellington since 2002, where he is currently an associate professor in law. 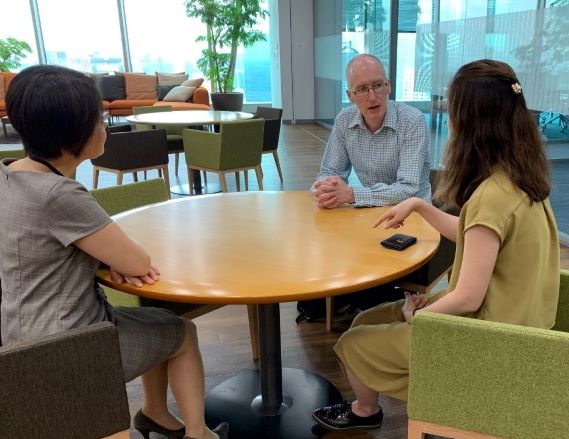 His main research areas are mediation, negotiation, and legal history, and he recently co-authored Mediation in New Zealand (Thomson Reuters, 2018), the first comprehensive scholarly treatment of mediation in the country.

Morris was on his second visit to Tokyo after a 16-year hiatus, accompanying the New Zealand team that participated in the International Negotiation Competition, held at Sophia University in Tokyo. He was the coach of the NZ team, comprising students at his university, which placed sixth overall (with “trans-Tasman rivals” Australia coming in first).

After the competition he visited Kyoto, traveling from Tokyo by Shinkansen, which, he says “was the fastest and most efficient train I have ever travelled on!” In Kyoto he visited the new International Mediation Center, located at Doshisha University.

We are very pleased that he also dropped by the Sylff Association Secretariat, giving us a chance to introduce the many opportunities for additional support available for Sylff fellows. “It was great to visit the team at Sylff and discuss current projects. There is a lot of very exciting work being done,” he said.

Grant, center in the first row, during his visit to the Sylff Association secretariat

To our pleasant surprise, we also learned during our conversation that he has very strong links to the Sylff community. His wife was a Sylff fellow at the Victoria University of Wellington, and one of his students, Jennifer Moore, was also a fellow who recently received an SLI grant to improve medical injury responses.

We hope that he will come back to Tokyo often to strengthen his ties with the Association.