Rimple Mehta, a Sylff fellow at Jadavpur University, and her project partner, Mahuya Bandyopadhyay, an associate professor at the School of Development Studies of the Tata Institute of Social Sciences, Mumbai, implemented a year-long social action project with funding from the Sylff Leadership Initiatives (SLI). Their project is intended to build a network with practitioners, scholars, and activists to work as a pressure group to ensure the rights of women prisoners in India and raise awareness beyond the network to change the negative perceptions around the issues at hand. In this article, Mehta and Bandyopadhyay write about their SLI-funded project.

Women prisoners in India constitute five percent of the prison population. They are often incarcerated in wards within larger prisons for men. Women prisoner wards then become “prisons within prisons.” There are only a few all-women prisons. Once in prison the women are ostracized by their families, as they are perceived as breaking not only legal codes but also social norms, therefore doubly deviant. Ostracization by families means that their access to justice is limited. Seclusion through imprisonment is not just a physical seclusion but also an alienation from their familial and kin networks. This indicates their marginalization both within the institution and outside it.

Institutions like the prison in India do not receive adequate media or public attention because of the perceptions around crime and criminality. Although the ideas of incarceration have shifted from punishment to reform, in reality prison administration and the public beyond prison walls continue to be dismissive of any efforts toward reform and rehabilitation and of any attempts to talk about the concerns of prisoners and prison administration.

Social justice for women prisoners in India is a neglected area but has been the focus of our research for a decade now. This project, although in continuity with our efforts, marks a departure in two ways: First, it expands the boundaries of research and understanding of the lives and contexts of women’s imprisonment through the inclusion of activists, scholars, social work practitioners, and administrators. Second, we have consolidated our previous ethnographic fieldwork experiences to move beyond the specificities of site and initiate discussions on advocacy around issues of women prisoners. One of the first steps toward social change, we believe, is reflexivity. While evaluating our research on women prisoners, we felt compelled to reflect on our positions and our location within the academic and certain disciplinary contexts. With years of research on, learning about, and understanding of women’s imprisonment, we were able to see the need to move out of the confines of our locations to collaborate with those who are engaging with similar issues in different capacities. The SLI award enabled us to put this idea to action.

The main foci of the project were to find and engage with those committed to bringing about a change in the lives of women prisoners and to open up a space for discussions on their lives. We have realized this by organizing meetings—in Mumbai, Kolkata, and Delhi—and a workshop titled “Carceral Logics and Social Justice: A Dialogue between Practitioners, Scholars and Activists” that brought together scholars, activists, social work practitioners, and administrators.

Most of the participants in the workshop contributed papers detailing their work and experiences with women prisoners to our book, Women, Incarcerated: Narratives from India. Through this edited volume we will be able to reach out to the general reader interested in women offenders, concerned citizens, and organizations working for social justice. The narratives of women prisoners from different parts of the country featured in the book will enable readers to access their lives and conditions of imprisonment, which are otherwise invisible.

Further, the book, as it moves beyond the constrained domains of academic disciplines, is written in a manner and style that are easy to connect with and enable a wide readership. In including various perspectives outside of academic research, we have broadened the horizons of knowledge and understanding about women prisoners in India.

We were able to enter into multiple dialogues through this project. The process of organizing the meetings enabled us to understand the complexities and the challenges involved for those working on the ground to address concerns in women’s imprisonment. The meetings that we held in different cities brought forth diverse concerns from specific local contexts of women’s imprisonment. For instance, at the meeting in Kolkata, the absence of sanitary napkins and baby food for children in prison emerged as a major concern. When this issue was brought up in the Mumbai meeting, it was observed that this was being provided and was, therefore, not an issue of prime concern in that locality. At the meeting in Delhi, the need was emphasized for formalizing alliances to work on specific issues around women’s imprisonment.

The participants of the three meetings asserted the need for an online platform to share existing knowledge, brainstorm on emergent issues, and respond to crisis situations with regard to women prisoners. They felt that even though individuals and organizations were doing substantive work trying to push for reforms in the treatment of women prisoners, much of this work remained isolated efforts. Consolidation of this work through a larger and formalized network was suggested. The Indian Prisons Network (IPNet), for which these three meetings were held, was endorsed and has been initiated through this project.

The need for different people to speak at a common forum and the difficulties of doing so were highlighted in our workshop, which was organized with the contributors to our edited volume. The different ideological positions initially generated some discomfort among the participants. But the discussions stand testimony to the fact that the participants’ work was geared toward bringing out a change in the everyday lives of women prisoners. The papers in the volume lay bare women’s experiences of exclusion, marginalization, and violence and the ways in which incarceration intersects with different institutions in their everyday lives. The ongoing dialogues with our contributors as we edited the papers have added a qualitative edge to the way in which these issues of women prisoners have been represented.

In this entire process, we have also built stronger connections with some of our supporters and collaborators who have been actively working within the prison space. These connections have opened up the space to work toward making the prison more accessible to researchers and practitioners. The opening up of the prison through dialogue and writing disrupt the singular narrative of the woman prisoner as “mad woman,” “socially deviant,” and “morally bankrupt,” paving the way for empathy. 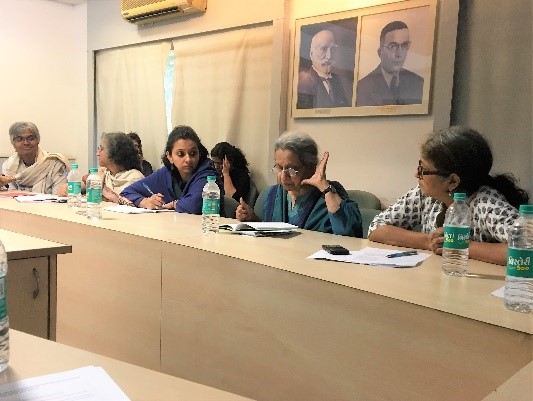 Uma Chakravarti speaks at “Carceral Logics and Social Justice: A Dialogue between Practitioners, Scholars and Activists.”

The significance can never be overstated of the publication and dissemination of ideas in an area where information and knowledge are scarce and, even when available, are articulated only in terms of certain dominant and powerful narratives. Through this project we have attempted to communicate the lives, contexts, and treatment of women prisoners in India. By presenting multiple perspectives, we have countered the idea of a single narrative about a woman prisoner that rests on an assumption of breaking a moral code. We seek to continue this effort through more field engagement, research, and writing about prisons in India.

Moreover, this project has brought forth and strengthened the idea of experiments within governance and reform, such as the cultural therapy initiative in West Bengal. We would like to further explore and document these ideas, to see if there are other experiments in the country including documentation of the open prison. Advocacy initiatives through networking can further strengthen these activities, and we hope that through IPNet we will be able to harness the strength of a collective. Networking on an issue that has limited field accessibility increases the value of networking. We envisage that this may be possible because IPNet has adopted a multi-stakeholder approach, where individuals and organizations value empirical research and experiential participation in prison administration.

Rimple Mehta, PhD, is a Lecturer at the School of Social Sciences, Western Sydney University. She has previously worked at the School of Social Work, Tata Institute for Social Sciences, Mumbai and School of Women's Studies, Jadavpur University, Kolkata. Her research and field engagements broadly focus on women in prison, refugee women, and human trafficking. She engages with questions of borders, citizenship and criminology of mobility. Her paper titled "So Many Ways to Love You/Self: Negotiating Love in a Prison" won the 2013 Enloe Award and was published in the International Journal of Feminist Politics. Her monograph titled "Women, Mobility and Incarceration: Love and Recasting of Self across the Bangladesh-India Border" was published by Routledge in 2018. Her latest co-edited volume is titled “Women, Incarcerated: Narratives from India”. She has worked with women in prisons in Mumbai, Kolkata, Sydney and in detention centres in The Netherlands.