Nomingerel Davaadorj, a 2009 Sylff fellow at the National Academy of Governance and one of 20 participants in the first Sylff Leaders Workshop, gives her insights into local foods in Mongolia, her home country, and Japan, where she spent two years in completing her LLM at Kyushu University.

I had the privilege of participating in the first Sylff Leaders Workshop, where Sylff fellows from diverse backgrounds discussed the topic of “The Future of Food Production in 2030” in the cities of Sasayama, Hyogo Prefecture, and Beppu, Oita Prefecture, in Japan. The workshop was a generous opportunity to experience Japanese culture and cuisine and to access important landmarks and places in Japanese history. It also motivated me to share my thoughts about local foods and food experiences I enjoyed in Japan during the workshop.

Food production and food security are not directly my professional concerns. However, I became interested in these issues through my research into pastoral livestock husbandry management. Pastoral livestock husbandry is still practiced in Mongolia today, and it is considered a main producer of organic food. I remember being surprised when I discovered that there are restrictions on the intake of milk and dairy products by young children in some countries. This was because I was taught as a child that milk and dairy products are good for our teeth and bone development. Fortunately, we had organic milk and dairy products produced through traditional, free ranching practices. They were all locally produced or processed, and we did not need to worry about high levels of hormones, antibiotics, or pesticides. Since initiating my research on pastoral livestock husbandry, I have come to know the significance of locally produced foods and their benefits to our wellbeing and environmental sustainability. 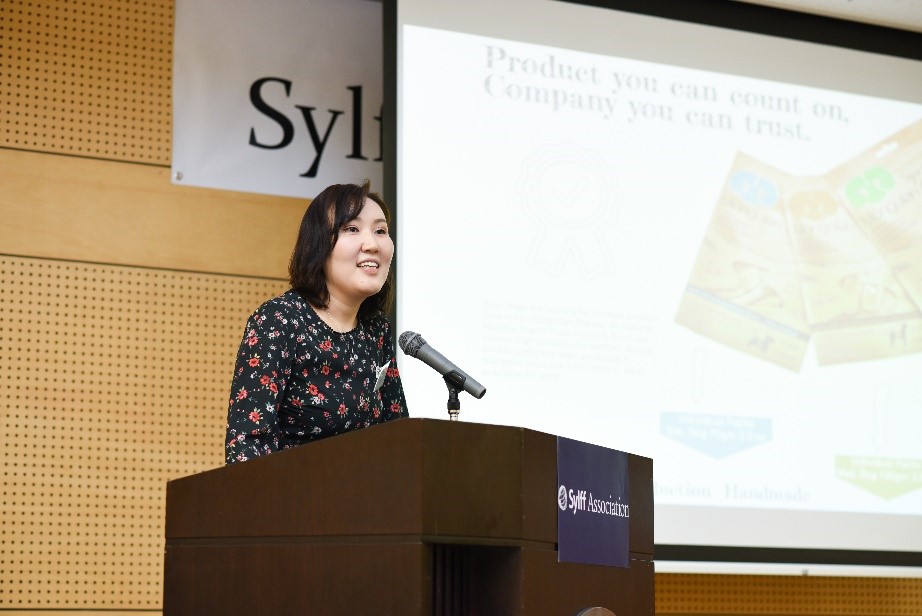 Describing local foods in Mongolia at the final presentation in Beppu.

One solution toward ensuring food security generated from our discussions was to utilize cultural knowledge of staple foods. During my two years living in Japan, I have noticed that the eating habits of the Japanese people are very healthy and that Japanese-style dishes use very nutritious ingredients. The keynote speech in Sasayama by Professor Narumi Yoshikawa, an expert on the agricultural economy, about the teikei organic agricultural movement initiated in the 1970s was intriguing because it is based on traditional culture and embraces eco-friendly practices. It was an example of how local foods and traditional, indigenous knowledge could become part of a national trend.

Until recently, I believed that we, Mongolians, are lactose-tolerant, meaning that we can digest milk and dairy products with an enzyme called lactase in the body.[1] Dairy foods make up a significant share of our food consumption even in adulthood. But recent research revealed that only 5% of Mongolians actually have lactase persistence alleles. Additionally, findings indicated that traditional knowledge of producing dairy products played a significant role in changing the microorganisms in milk.[2] In brief, traditional food culture and its food processing technology, passed down from generation to generation, simply changed the “game” to compensate for lactose intolerance.

Local food items, naturally, form the core of local cuisine. In Japan, many localities have developed their own typical dishes that are only available locally. Examples include Kobe beef, Hokkaido’s soft serve ice cream and seafood, Okinawa’s yagi sashimi (raw goat meat), Fukuoka’s Hakata ramen, Itoshima’s oysters, Osaka’s takoyaki, Hiroshima’s okonomiyaki, and so on. They all use common foods like vegetables, fish, and meat, but the uniqueness lies in the way they are prepared or cooked, which is linked to traditional knowledge.

Discovering and eating famous local foods can be fun and delicious, almost like participating in a food marathon. During our workshop, we had opportunities to experience many traditional Japanese dishes, including black soybeans (kuromame) and boar meat in Sasayama, Edo-style cuisine on a yakatabune cruise in Tokyo Bay, Kyoto-style cuisine (kaiseki) in the Gion district of Kyoto, Buddhist cuisine (shojin ryori) in the Monju Senji Temple in Oita, and a pufferfish course (fugu) in Beppu. They were all special because they were prepared with local know-how and ingredients only available in the respective areas. 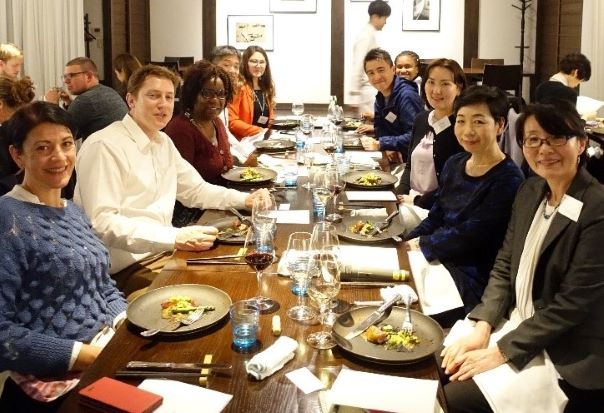 Dinner on the first night in Sasayama.

Shojin ryori is a meal without meat, fish, or other animal products, being based instead on grains and vegetables. It is the cuisine of Buddhist monks at Japanese temples. The main source of protein is tofu and other soybean-based foods. Before having shojin ryori at Monju Senji Temple, I expected simple dishes since my friendly coordinators from the Sylff Association secretariats told me so, and I was looking forward to experiencing the elegant austerity of the monastic life. Indeed, shojin ryori turned out to be a beautifully arranged and tasty set meal. It was evidence of how simple and humble ingredients can be rendered into a charming and fulfilling meal. Of course, the secret was traditional cooking knowledge and locally prepared tofu made with water from a spring. As the head monk explained, both my mind and body were gratified after having shojin ryori. 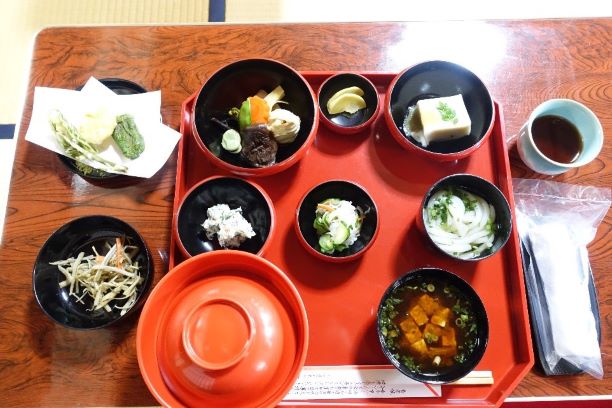 Fugu, or pufferfish, is a Japanese delicacy. Time magazine called fugu one of the Top 10 Most Dangerous Foods, saying “fugu’s intestines, ovaries and liver contain a poison called tetrodotoxin, which is 1,200 times deadlier than cyanide.”[3] Fugu has been eaten for centuries in Japan, though, and “poison-free” methods of preparation have been handed down from generation to generation. Currently, only licensed chefs who have two to three years of training are allowed to prepare fugu dishes. Another interesting fact is that fugu is the only food the Emperor of Japan is forbidden to eat by law. It was my first time to have a full set of fugu dishes, including fugu sashimi, fried fugu, fugu sushi, fugu soup, and fugu rice porridge. 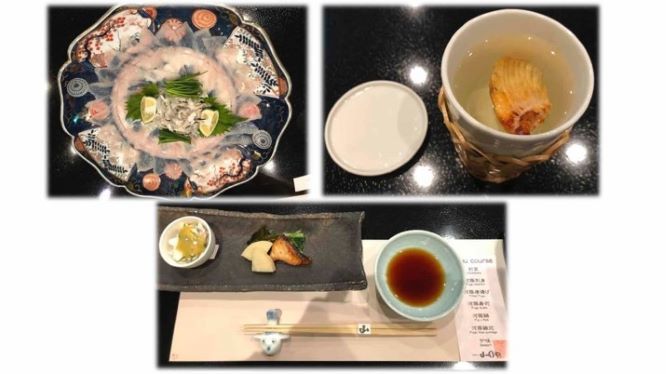 Shojin ryori and fugu are examples of local foods that developed as part of traditional culture using indigenous knowledge. Thanks to the support of policymakers and an effective tourism policy, local foods have taken root in every part of Japan. The traditional foods we encountered during the two sessions of the workshop were wonderful, yet quite different. Countries like Mongolia that face challenges in preserving local foods in the era of standardized food production should draw lessons from these initiatives in Japan. Locally grown foods are considered the most delicious and nutritious. Should we lose such local foods in today’s globalized world, this would be like losing one’s national identity. It would indeed be boring if everything was the same wherever you went. So, I hope that everyone will consider local foods seriously and support their survival into the future.

Finally, I want to thank the Sylff Association for giving me the opportunity to participate in a highly enjoyable experience during the Leaders Workshop. I treasure the friendship with the 19 other fellows who continue to inspire and motivate me in promoting my professional and personal growth. Thank you all!

Davaadorj Nomingerel is a legal officer for Government agency for Policy coordination on State property of  Mongolia. Currently, she studies for LLM program at Kyushu University. During her Sylff fellowship program at National academy of Governance, her master's thesis targeted to analyze effective and efficient methods (particularly through official educational system/curriculum) to improve and strengthen knowledge and awareness of public legal education to general public.