Forced Migration in Transition: Perspectives from Social Science and Law

In November 2019, we, members of the Sylff Mikrokolleg on Forced Migration at Ruhr University Bochum (RUB), hosted the conference “Forced Migration in Transition: Perspectives from Social Science and Law” at our home university in Bochum, Germany. The conference brought together researchers and practitioners from different disciplines to tackle pressing issues revolving around forced migration.

Our three-member organizing committee consisted of Benedikt Behlert, Corinna Land, and Robin Ramsahye. Benedikt and Robin are PhD students in international law at RUB’s Institute for International Law of Peace and Armed Conflict (IFHV). Corinna is a PhD student at the Social Science Faculty. All of us are current or former fellows of the Sylff Mikrokolleg on Forced Migration at RUB. The Mikrokolleg was established in 2017 as an interdisciplinary group of four PhD students contributing to the field of forced migration studies from different angles through their individual PhD projects and through common projects like our conference. By now, it has assembled a network of eighteen members around itself, consisting of seven professors, three current Sylff fellows, and eight associates, two of whom are former fellows. Following the aim of Sylff to “nurture leaders who will initiate action to transcend differences and address issues confronting contemporary society,” the theme for this micro assembly of young researchers at the doctoral level was quickly found: forced migration, one of the greatest challenges facing the international community today.

An Interdisciplinary Conference Bringing Together Academia and Practice

Given the contemporary dynamics of human mobility, scholarly debates on “forced migration” gained new momentum over the last year. Controversial discussions often revealed a set of highly important challenges concerning theoretical, conceptual, and methodological approaches. They also confirmed that it was impossible to truly understand this multidimensional issue without intense cooperation between various disciplines.

Against this backdrop, our conference provided a highly necessary platform to discuss recent research findings and theoretical approaches. The fruitful academic exchange was enriched by perspectives of experts from the human rights and development practice who assured the real-world relevance of the debate.

Experts from humanities and law as well as representatives from civil society met in four consecutive workshops and raised yet unanswered questions at the heart of the matter: What is forced migration after all? How do we define it? How useful is distinguishing between legal and other categories? What is the role of affected individuals in forced migration studies? How can we mitigate the pressure to migrate? And what are our possibilities and responsibilities as academics and citizens to defend public discourse from ever more xenophobic and exclusionary voices? 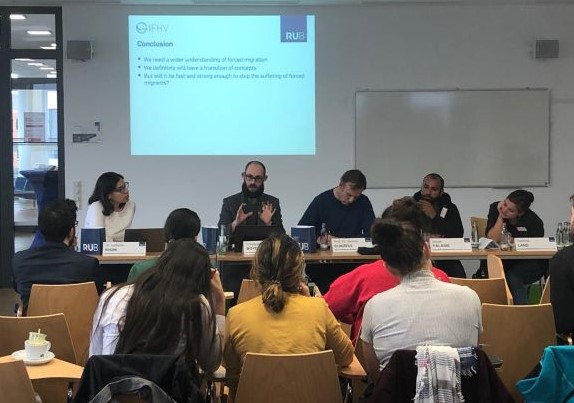 Panel 1, titled “Transition of Concepts” and chaired by Corinna Land, reflected our interdisciplinary discussions as Kolleg fellows as to what our common project should focus on. It showed that the definitional clarity that a lawyer is trained to seek cannot be conjured out of thin air when it concerns such a contentious and complex term as forced migration. The contributions of all four panelists highlighted that forced migration is conceptualized today as an integral part of global social inequalities that continuously produce forced mobility. Focusing on the African continent, Serge Palasie, a practitioner with the nongovernmental organization Eine Welt Netz, presented a macrohistorical overview of reasons for such inequalities, drawing a link from European colonialist exploitation to contemporary hegemonic practices of states underpinning the global economic order. Christopher Boyd, a doctoral candidate at the University of Glasgow’s School of Law, built on this approach with a critique of the international legal system. As “part of the problem,” international law cements hegemonic political projects as law and is thus inherently limited in providing solutions. Dr. Isabella Risini, an international law researcher at Ruhr University Bochum, equally emphasized the complexity of forced migration in a globalized world in which political, economic, and social questions are tightly interwoven and argued for a moderate role of international lawyers. Dennis Dijkzeul, professor of organization and conflict research at the IFHV, reminded the audience of the importance of gaining a wider understanding of forced migration processes through the actors involved, including states and, increasingly, networks of international organizations and NGOs. 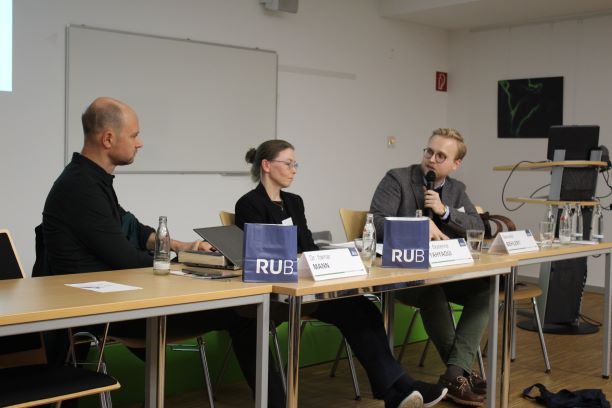 Panel 2, called “Transition of Perspectives” and chaired by Benedikt Behlert, moved the focus from the broader notion of forced migration to individual forced migrants. It explored the rise of actor-oriented theories in law and social sciences transcending the longstanding image of migrants and refugees as passive beneficiaries of humanitarian assistance. The panel acted as a forum to discuss what agency these groups have in defending their interests. Legal scholars Dr. Itamar Mann from the University of Haifa and Dr. Ekaterina Yahyaoui from the University of Ireland, Galway, presented their approaches. Taking writer Behrouz Boochani’s account of life in an Australian refugee detention center on Manus Island in the Pacific as a starting point, Dr. Mann illustrated cases of judicial activism in favor of refugees’ human rights. Having himself brought a claim regarding detention practices against Australian authorities before the International Criminal Court, he provided insights on ways in which international law may be used to further migrants’ rights. Dr. Yahyaoui explored theoretical approaches to circumscribing actors in need of international support, based on the “turn to vulnerability” in refugee and forced migration studies. Criticizing this approach for its lack of nuance, she argued for increased consideration of substantive equality as part of the established human rights framework, coupled with the theory of intersectionality, which allows for engagement with individual experiences instead of schematic categorizations. 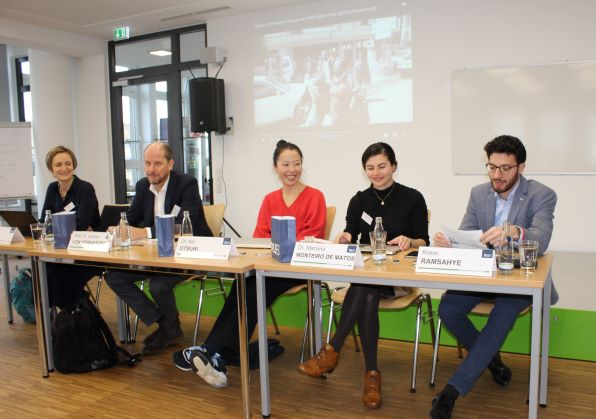 Panel 3, themed on “Transition of Law” and chaired by Robin Ramsahye, zoomed in on the specific scenario of land allocation within populations and ensuing conflicts as an important driver of forced migration. International litigator Lucy Claridge of Amnesty International provided insights into the Endorois case before the African Commission on Human and Peoples’ Rights. As counsel, she represented members of the Endorois community, who had been displaced by the Kenyan government, in their quest for restoration of their historic land and compensation. Professor Jochen von Bernstorff from the University of Tübingen assessed current efforts to recognize the right to land in international law and examined the structural implications of land rights for the broader framework of international law. Dr. Kei Otsuki of Utrecht University explored the notion of infrastructural violence, pointing to problematic aspects of progressive legal frameworks in reaction to modernization and resettlement, which ultimately contributed to legitimizing and formalizing displacement. Mariana de Martos from the Max Planck Institute for Social Anthropology in Halle concluded the panel by analyzing the discrepancies between the law and its implementation through a case study of indigenous peoples’ land rights in the Brazilian Amazon rainforest. 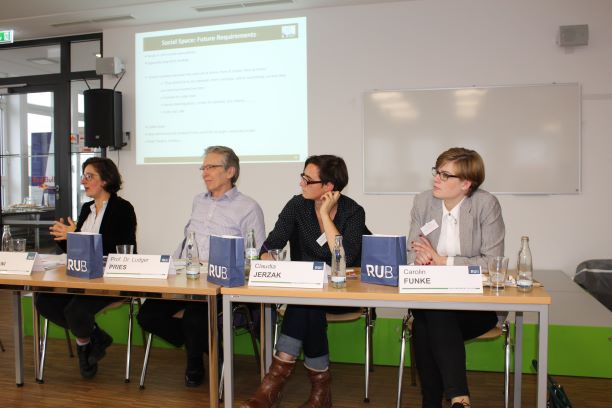 Panel 4 chaired by Carolin Funke, far right, looked at the issue of migrants’ integration into their host communities.

Lastly, Panel 4, “Transition of Space” chaired by Carolin Funke, a post-doctoral researcher at the IFHV, opened the conference lens to the wider societal discourse. Both the findings of academic research and practical work on the issue of migration often seem to be drowned out by highly emotional and shrill debates, increasingly dominated by adherents of extreme positions. The panel contextualized these observations from the perspectives of academia, practice, and the media. Professor Ludger Pries of Ruhr University Bochum stressed that refugees and migrants are often either maligned or paternalized. He stressed that narrow views labeling them as intruders or target groups for transnational solidarity miss the mark, since migrants are actors in their own right, shaping their destinies. Building on this, journalist Isabel Schayani provided an account of her daily work covering the fates of migrants stranded on the European outposts that many of them first arrive at, as well as the lives of migrants who make it to Germany and endeavor to create a life for themselves. Complementing these perspectives, Claudia Jerzak from the University of Applied Sciences for Social Work, Education, and Care in Dresden presented examples of the process of integrating migrants into host communities through highly structured spaces, such as integration courses, and interchangeable, prestructured spaces, such as meeting cafés and self-organized spaces where refugees act as hosts and organizers.


Invaluable Experiences and Much Gratitude

The conference has afforded us a number of lasting experiences and benefits. Securing the funds for and organizing the conference sequence enabled us to familiarize ourselves with many tasks that are of crucial importance in the academic world. Having conceptualized several panels in form and content under an overarching theme, reached out to people and secured commitments of participation, organized international travel, and coped with several last-minute cancellations, we feel we have gained insights that can only be achieved through action. The interdisciplinary character of the conference, merging social scientific and legal approaches to forced migration, was initially challenging to conceive but turned out to be very beneficial. Throughout the phase of substantial preparation, we had to transcend our own disciplinary boundaries in delimiting the panels in a way that worked from the perspectives of both law and social sciences. We were glad to see that the conference participants did the same by engaging in fruitful discussions. Beyond the immediate exchange in the panel discussions, the conference enabled us to expand our professional networks and make valuable contacts through numerous occasions for informal discussions with our guests, many of whom we have arranged to stay in touch with for future cooperation.

We are indebted and very grateful to a number of people and organizations for the conference’s success. First, we would like to express our gratitude to the Sylff Association and the Tokyo Foundation for setting up the Sylff Mikrokolleg on Forced Migration and giving us the opportunity to research and express our ideas through their generous financial and administrative support. A special thank you to Sylff director Yoko Kaburagi is in order for attending our conference and encouraging follow-up exchange.

We also very much appreciate the help of RUB’s Research School, which sponsored the conference and continuously supported us with logistics and procedures, most importantly in the person of Dr. Sarah Gemicioglu.

We would also like to warmly thank all associate fellows and researchers involved with the Sylff Mikrokolleg on Forced Migration and who made valuable contributions to the development of the conference. We are glad to see that there is a lot of interest in our Kolleg and that many promising young researchers stand ready to take over and move it forward still.


Behlert's related article "The State and the Rights of Individuals: Pursuing Research at the Graduate Institute Geneva" can be read at www.sylff.org/news_voices/27786/.